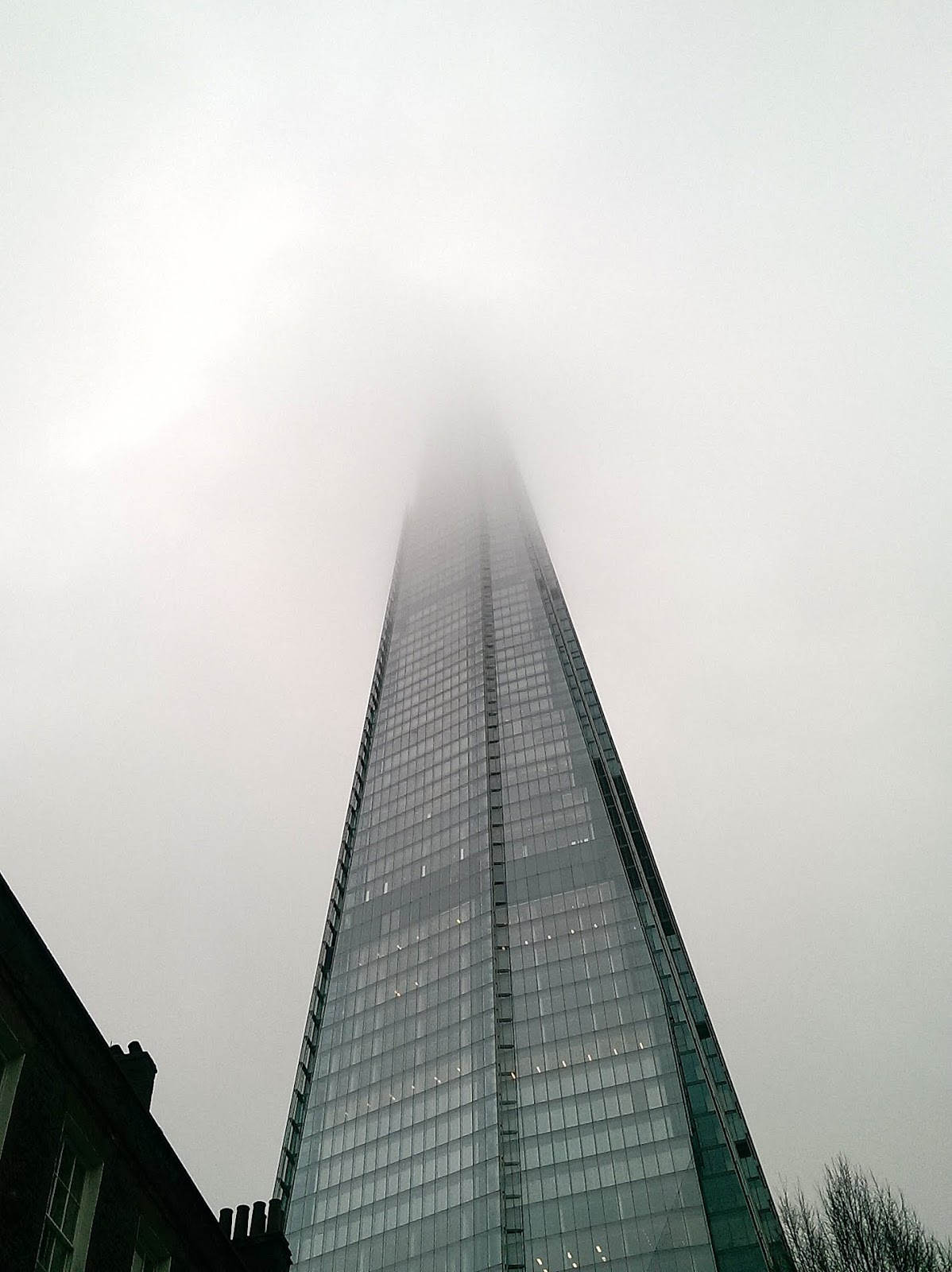 There’s something relentlessly dull about January. All the on the wagon hashtags and pictures of kale smoothies and running shoes that flood social media. As well as the physical interventions, usually staged after a solid month of eating Quality Street and mainlining Baileys in front of the Christmas tree, I also find there’s a horrible mental malaise to overcome too. While it’s the perfect opportunity to look forward to the future, as you get older it seems harder to see past the past. 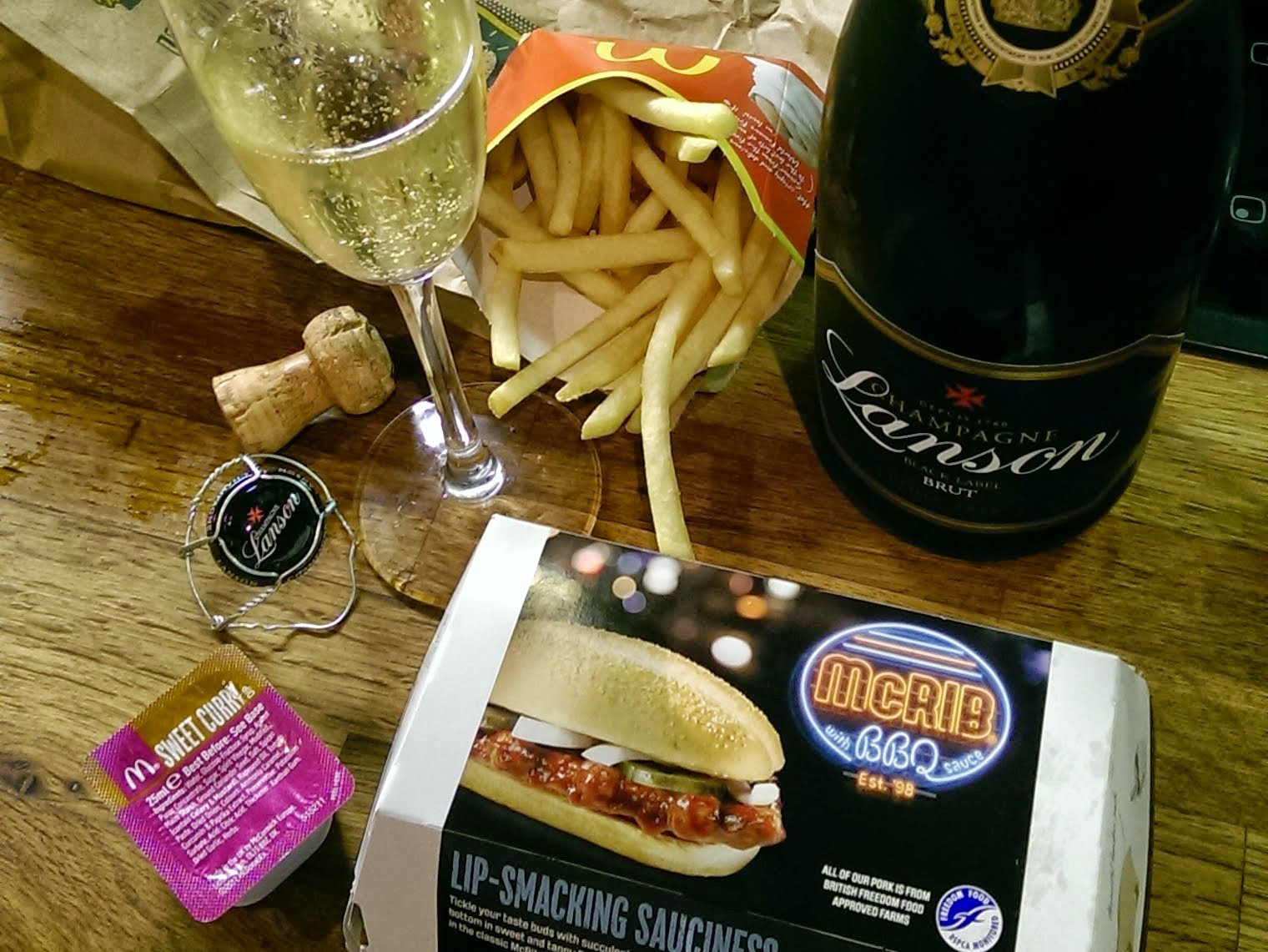 In an attempt to conquer this malaise, and in sheer defiance of abstinence I started 2015 with a healthy dose of alcohol, salt and saturated fat in the form of the limited edition return of the McRib, washed down with a bottle of Lanson that had been overlooked at New Year. A promising start, but I still needed a little fillip to perk up what had dawned as a particularly grim and rainy Saturday morning, even the view of the Shard had disappeared from Stealth’s balcony. This little piggy was going to Borough Market (with a reluctant Ewing trailing behind). 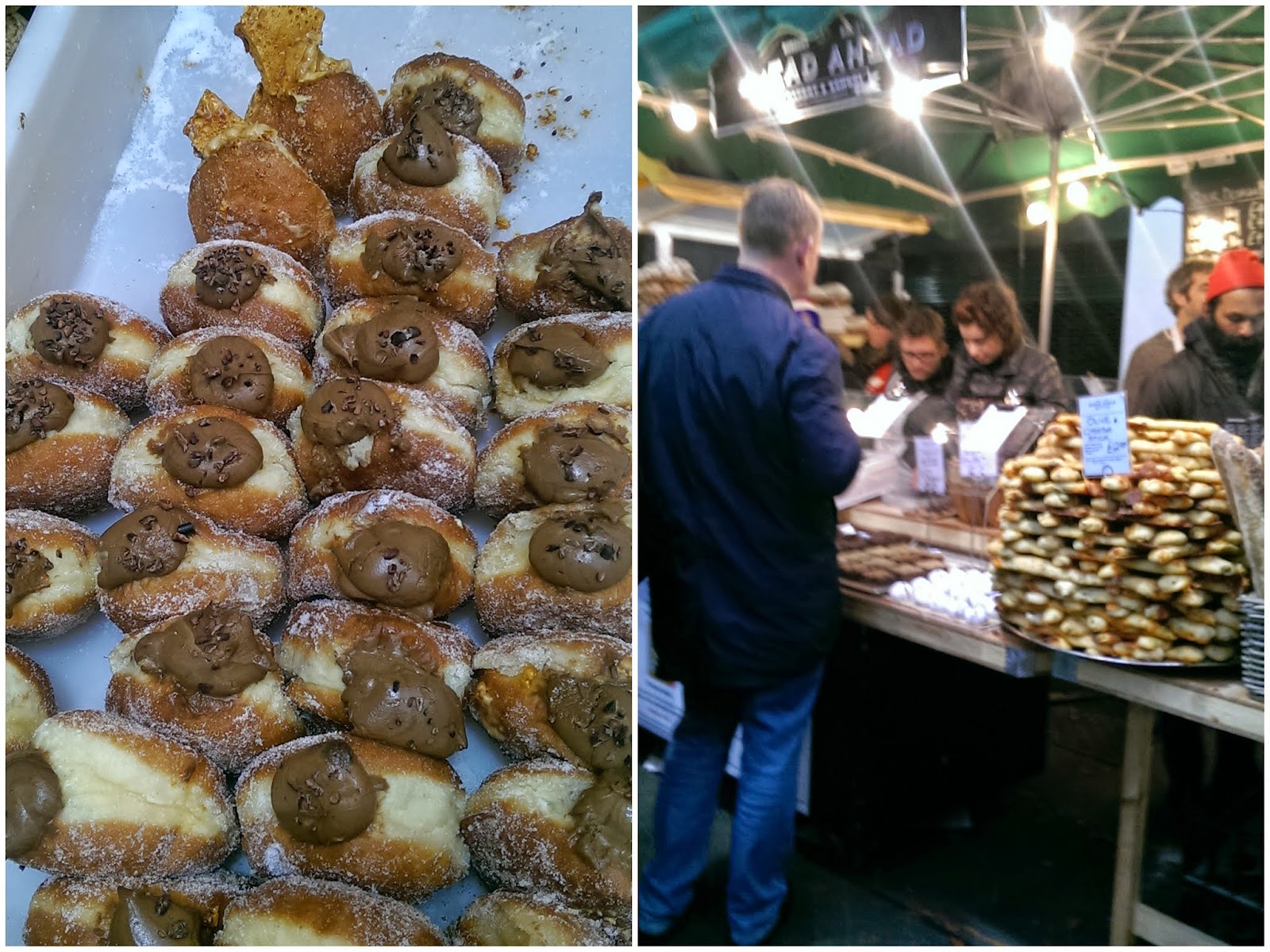 After a row about finding the bus stop, then a row at the bus stop and another disagreement after alighting from the bus, the restoration of matrimonial bliss (Stealth had wisely stayed at home napping) demanded a doughnut. Not just any doughnuts but those baked at the Bread Ahead Bakery - founded by Matt Jones of Flour Power and Justin Gellately formerly of St John fame. The very doughy orbs that spurt their custard and jam obscenely over my Twitter feed every weekend. 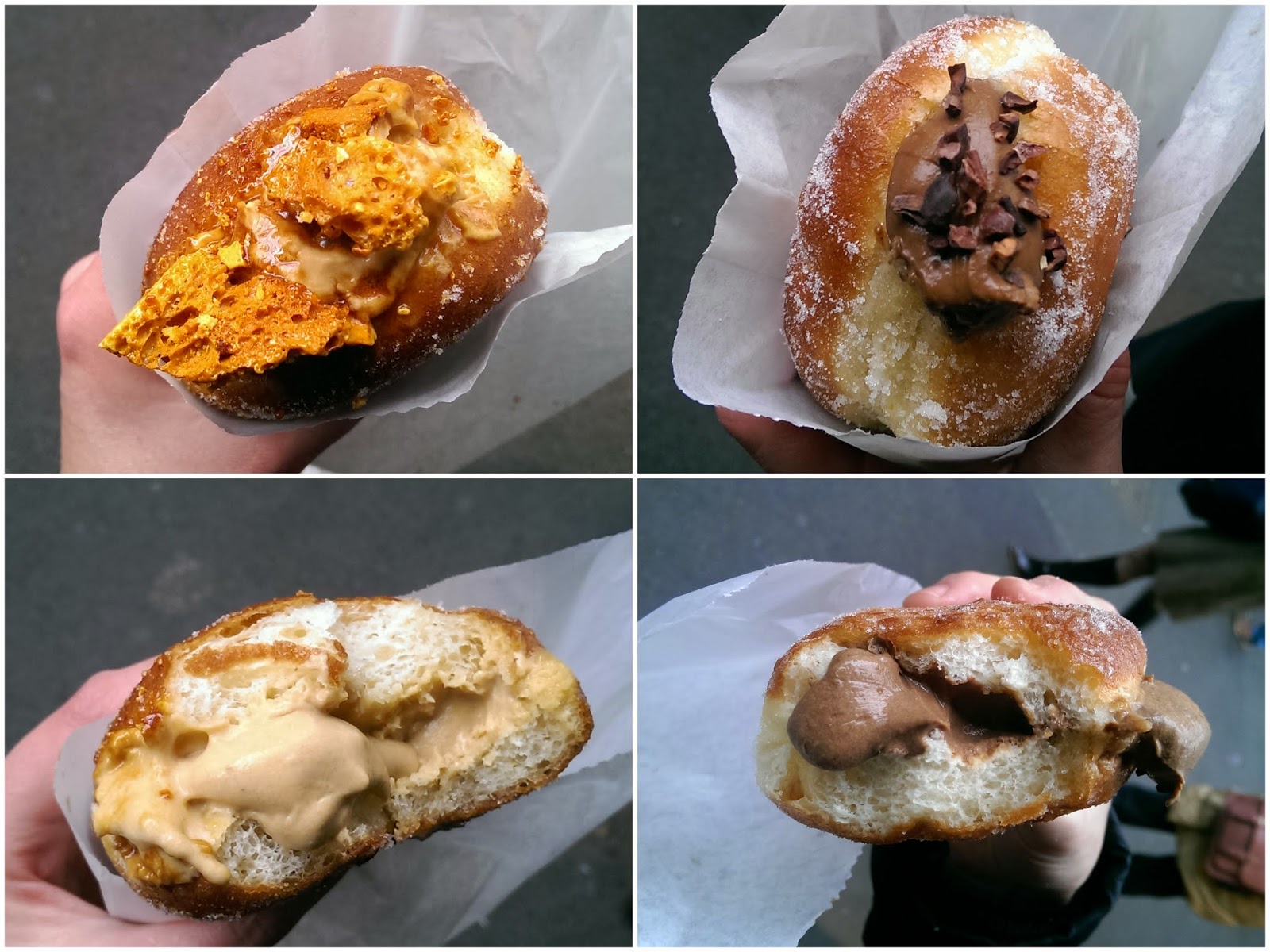 It seems that the apprentice has indeed surpassed the master as the doughnuts we tried – mine the honeycomb topped and salted caramel custard-stuffed and the Ewing’s cacao nib-dusted chocolate velvet – were both bigger and fluffier than the recent St John incarnations I’ve eaten. While I still appreciate the simplicity of the originals, there is something pretty special about these pretenders to London's doughnut throne

Passing time with a couple of these is probably the most fun you can have with your clothes on a Saturday morning, although with your clothes off it may be even better (watch out, though, for any errant sugar in the cracks). Mercifully for everybody else we stayed fully clothed, although with the thick fog still descending I’m not sure anyone would have noticed either way. 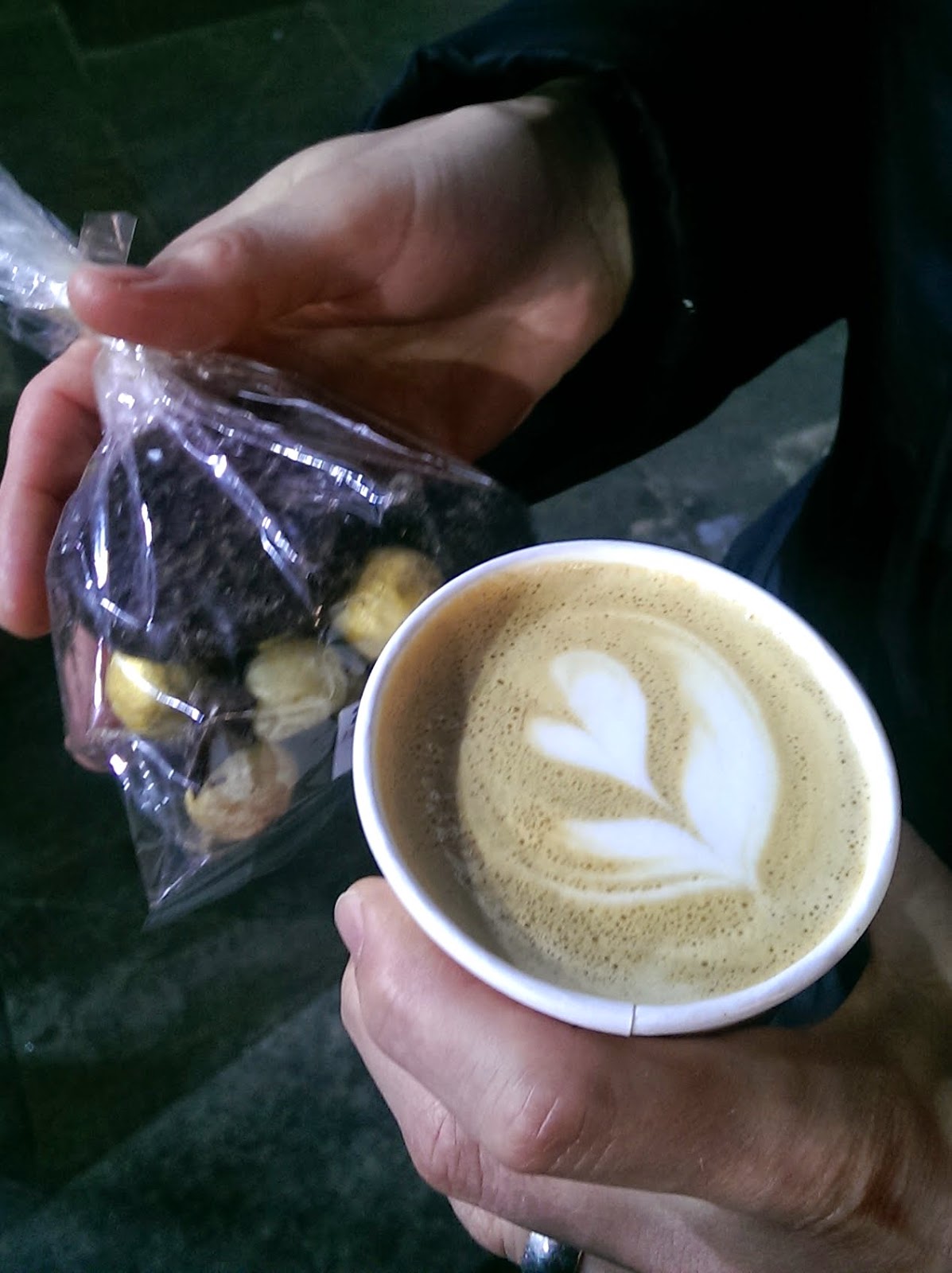 Next it was time to placate the Ewing, and what better way than with a bag of Artisan Du Chocolat's mis-shapes washed down with a Notes latte (see my Belgrave, Leeds post for my love-in with their lamingtons). I've got a soft spot for ADC's chocolates, especially the original salted caramels and the iridescent pistachio paste pearls, and these grab bags of the poor old rejects that didn't quite make the cut are a real bargain. 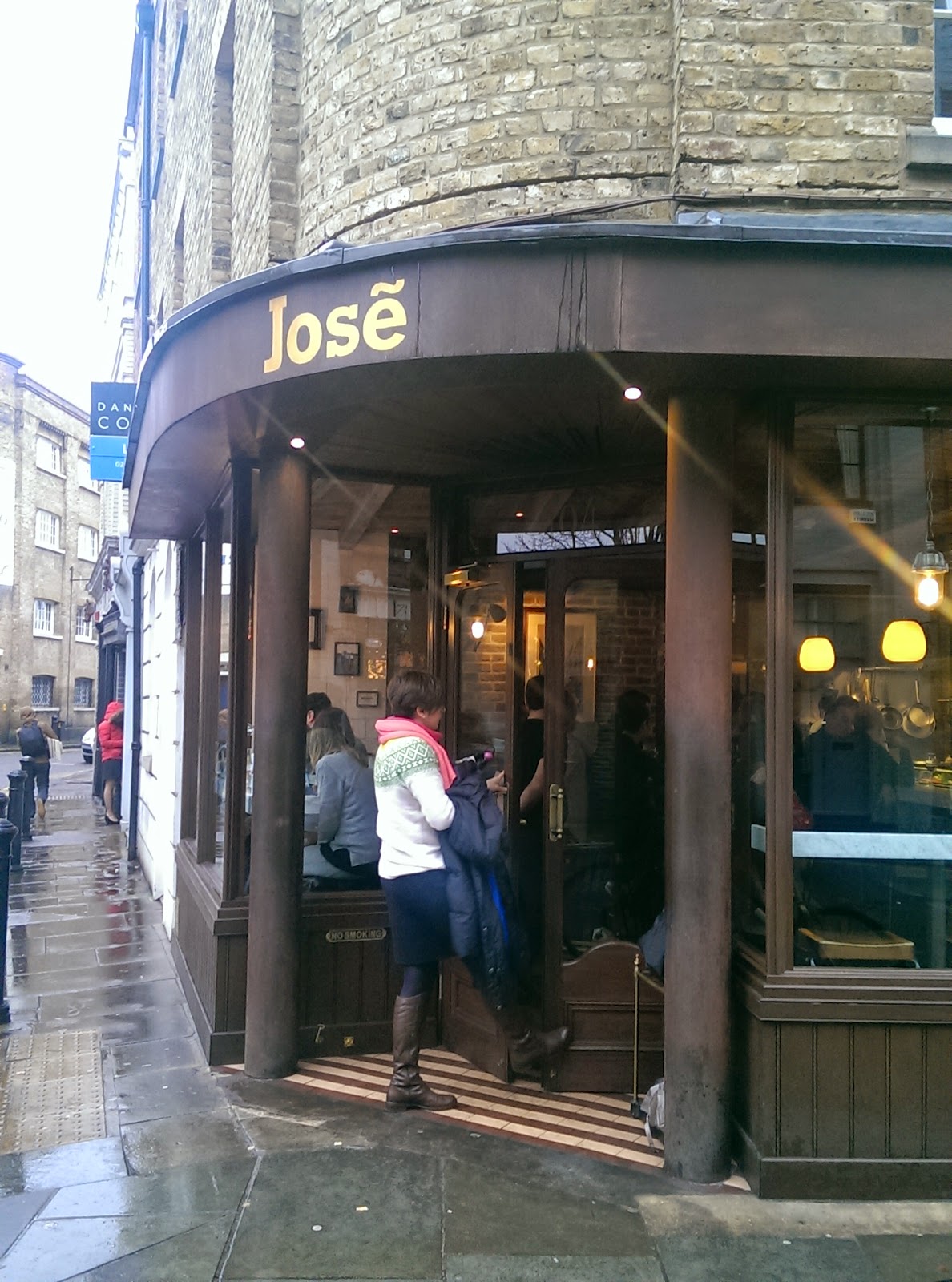 Because the Ewing had both forgotten her hat and gloves and was nursing the hangover from a bad ankle sprain from before Christmas (as well as the vestiges of a hangover of the more traditional kind), I thought it infinitely wise to leave the plethora of warm eating places with plenty of seating around Borough and make her traverse the foggy streets of Bermondsey to Jose, Jose Pizarro’s bijou tapas and sherry place. 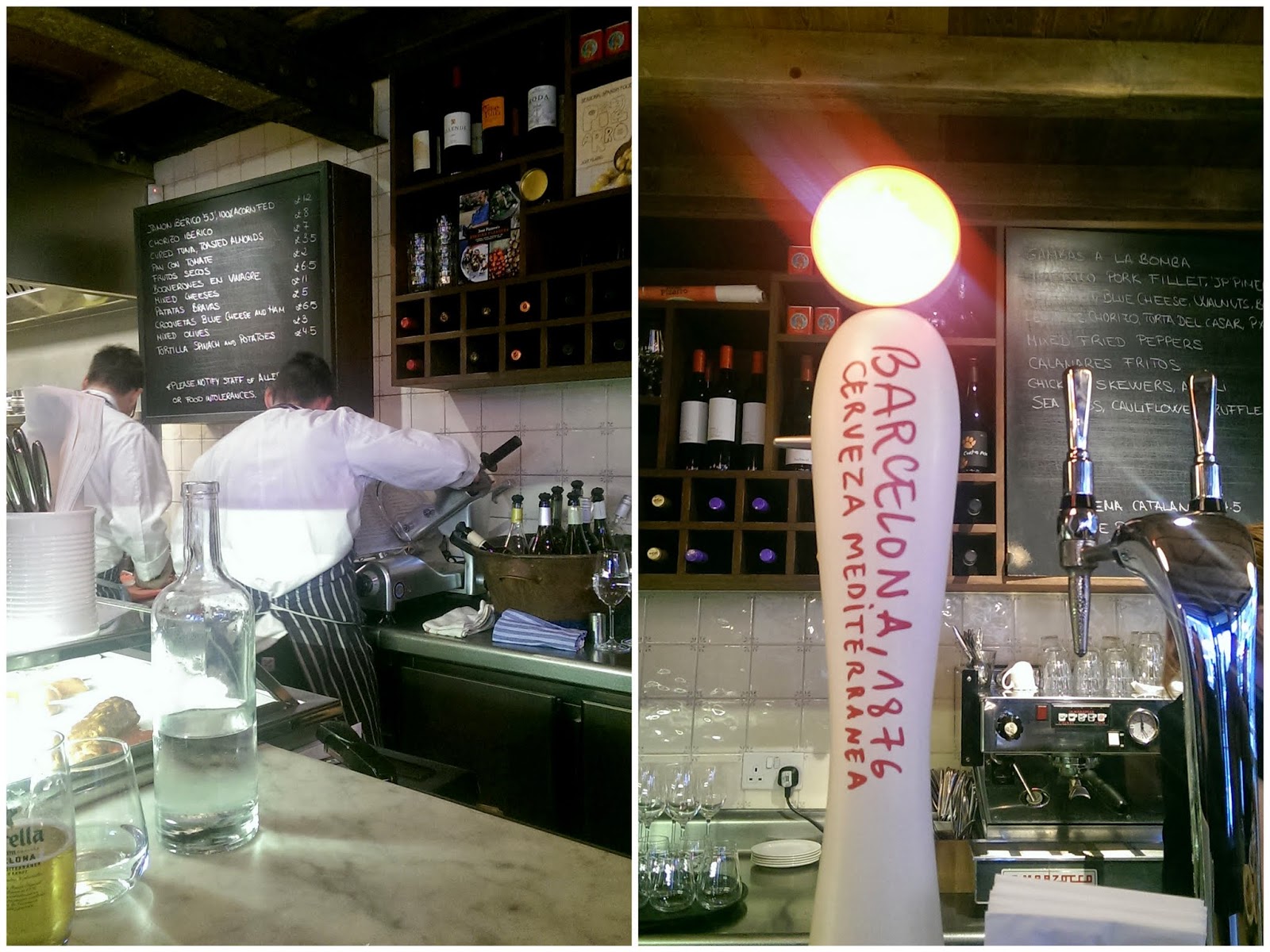 In a benevolent stroke of luck a couple of stools at the bar opened almost as we arrived and soon we were drinking cold glasses of Estrella Damm accompanied by a plate of hand carved pig - and not just any pig, but ‘the most excellent Maldonado Ibérico bellota pig’. It was lovely, of course, but the heathen in me still has a lot of love for the leg of cured ham from Lidl that I spend all Christmas surreptitiously standing by the fridge scoffing. 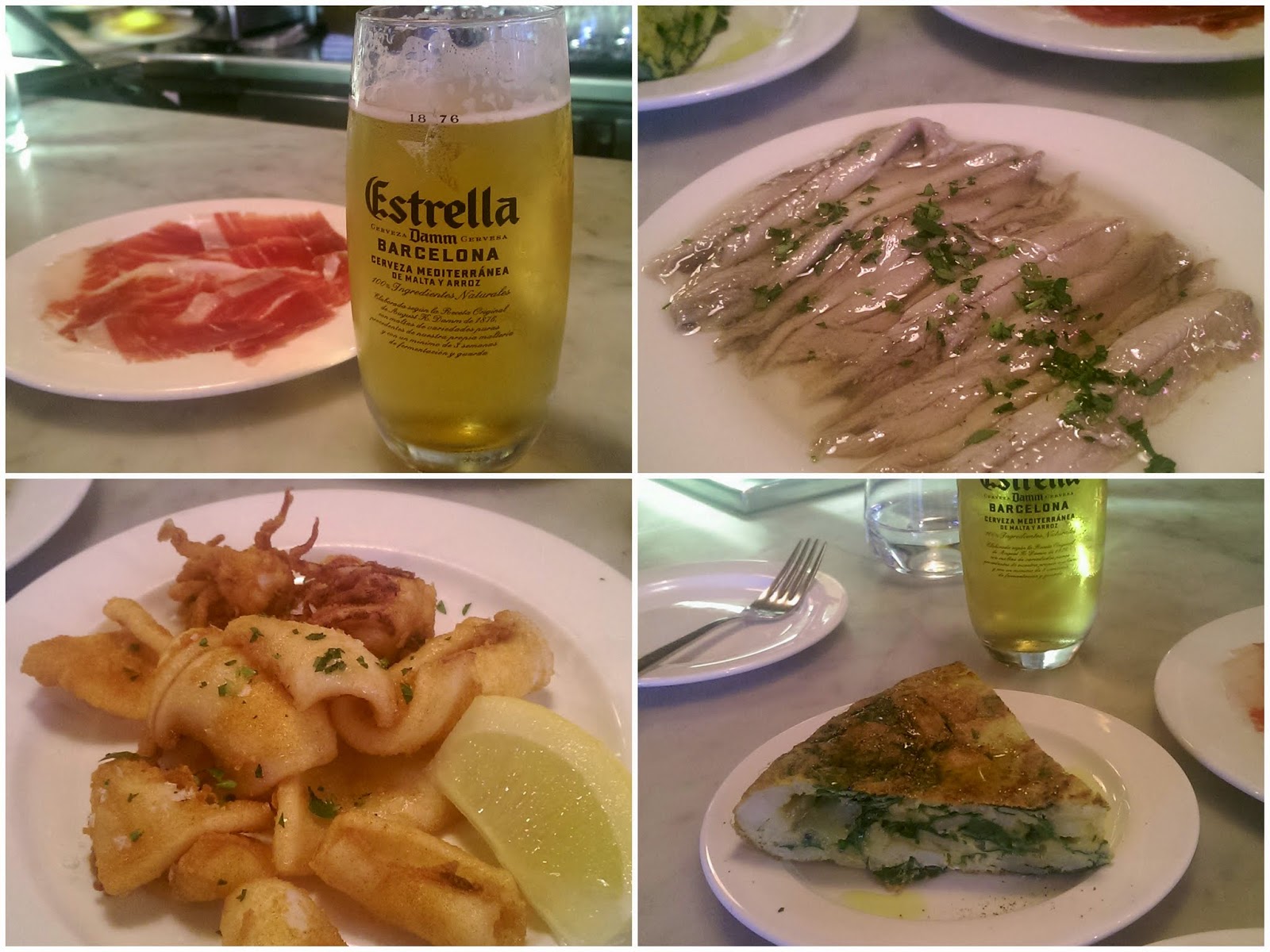 Alongside we enjoyed some punchy bocerones , with a gum tingling dose of vinegar, an ethereal spinach tortilla that just missed oozing in the middle and some of the finest, paprika dusted, crisp calamari fresh from the fryer. A crust or two of bread, a perfect sop for some of the fishy juices, was sadly absent, but they do serve very good pam amb tomate if you’re in the need of a few carbs.

Jose isn’t especially cheap - the price of small plate eating can sky rocket swiftly, especially if you’re making use of their Spanish wine and sherry list - but as I sat there on a leaden January afternoon, holding court with my lovely and long suffering wife with a plate of pig and glass of beer at my side, I couldn’t have felt more satisfied. 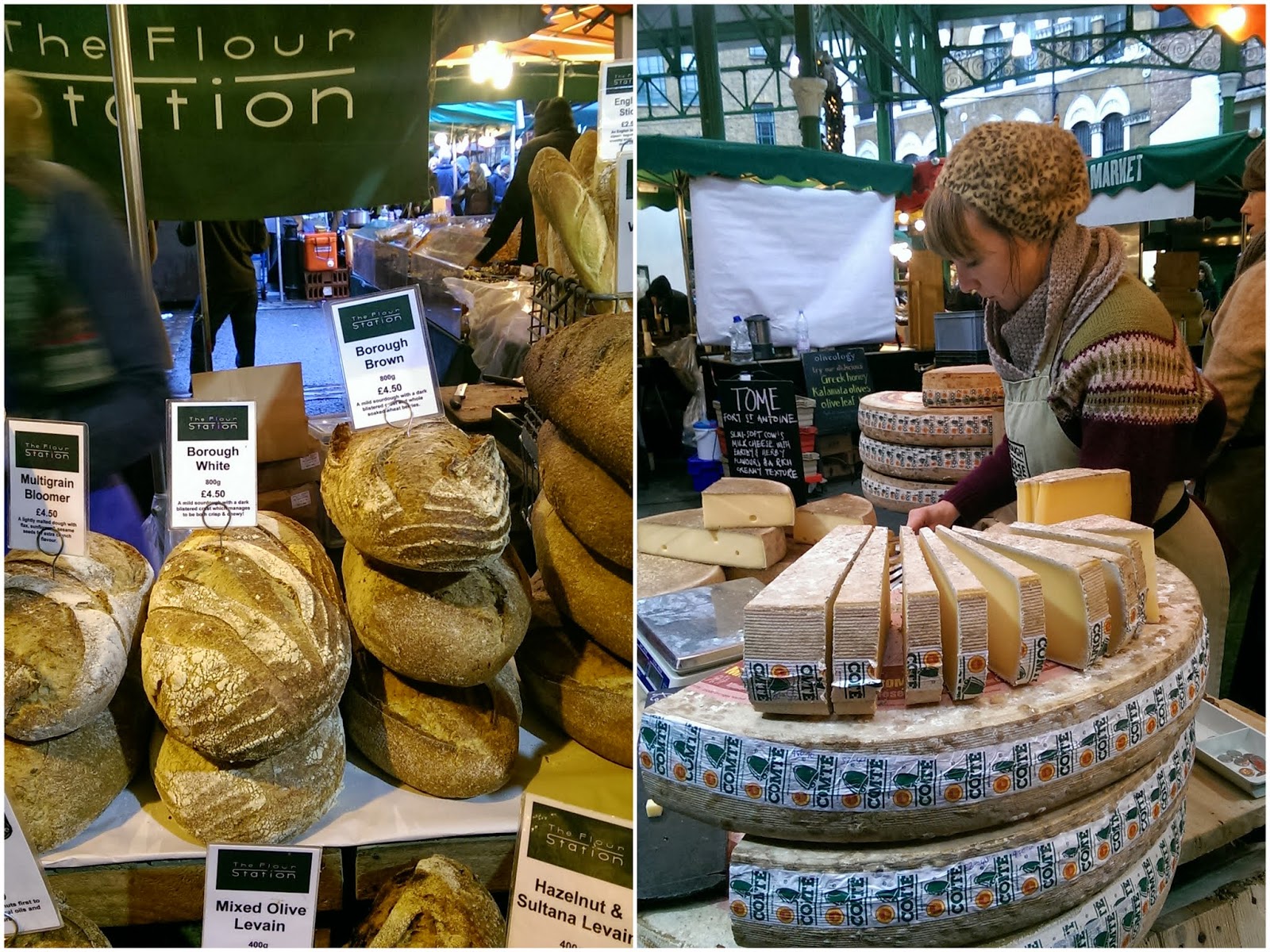 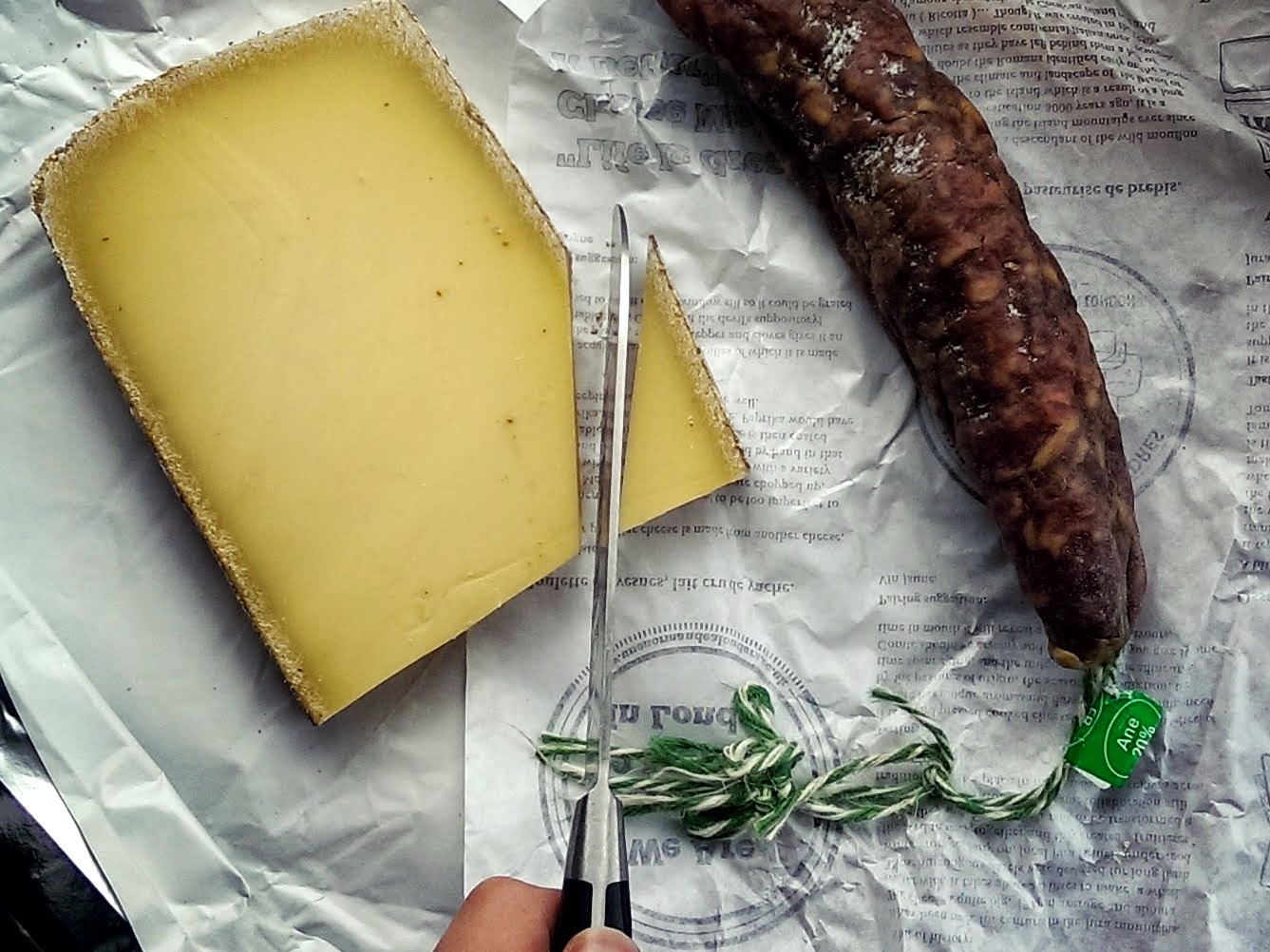 These little piggies soon went back to market, this time to fetch an indoor picnic for Stealth (who, in a fortuitous stroke of luck had meanwhile ordered a Japanese takeaway, meaning more for us to take back and snaffle later).

From the almost overwhelming section of cheese and charcuterie we chose a heady mixture of 15 month aged Comte, a hunk of Altesse des Vosges - a washed cheese, somewhere between a Reblochon and a Munster from the Lorraine -and a very nice donkey salami (well, it was just after Christmas) that the Ewing refused to eat. There was also a huge veg box, -with beefsteak tomatoes, frisee, peppers and fennel – picked up for two quid and a giant avocado for a pound. 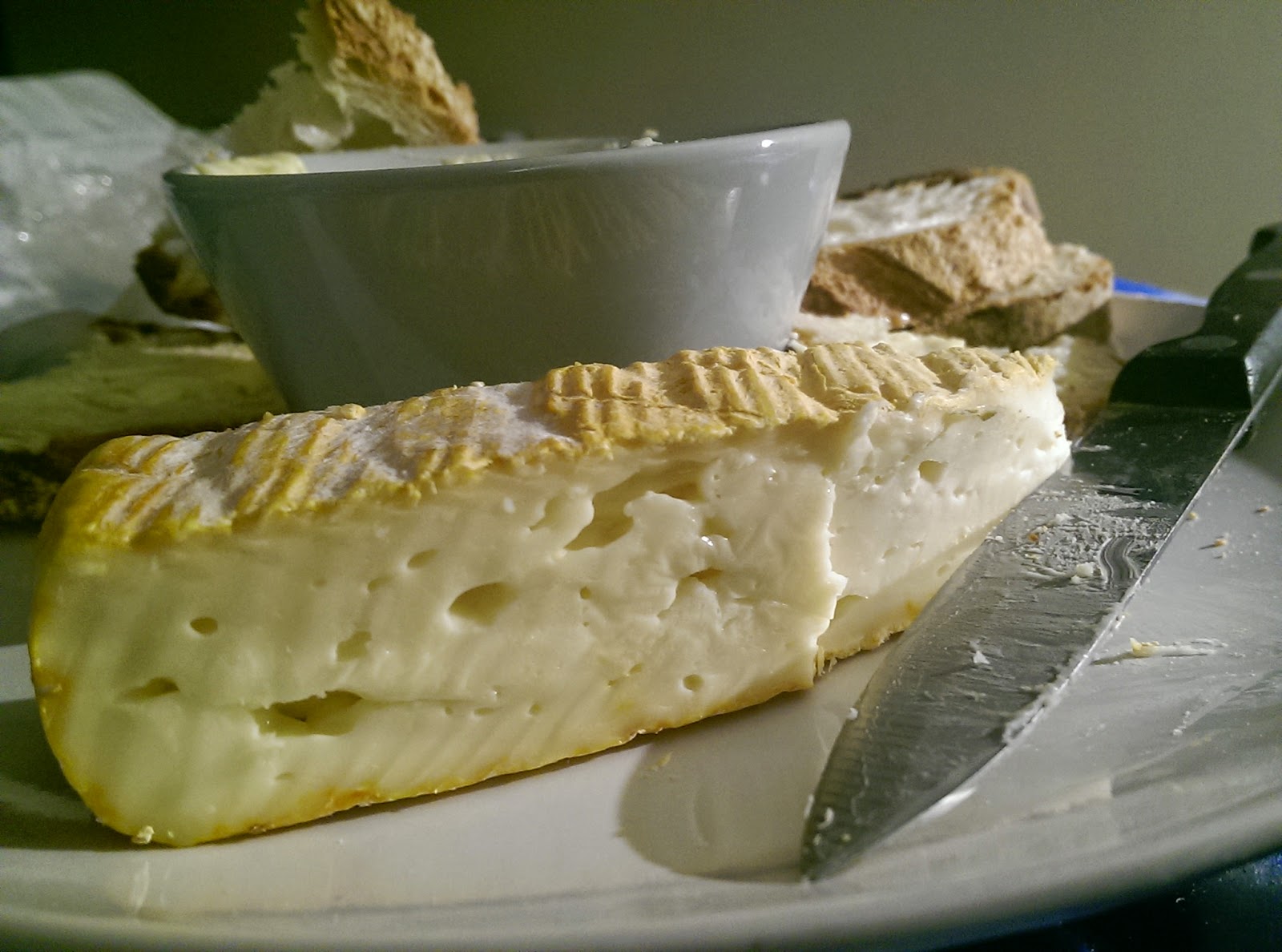 Top prize went to the loaf of the Borough White from the Flour Station. Anyone who thinks that four quid is too much for flour and water needs to try some of this. A few slices, with its smoky, burnished crust and a wonderfully chewy, light crumb, slathered with butter and the stinky, sticky Altesse des Voges and eaten while tucked up in bed made the perfect welcome back home to our empty house after all the festive excitement. A very happy New Year indeed.
Posted by Amy at 22:02