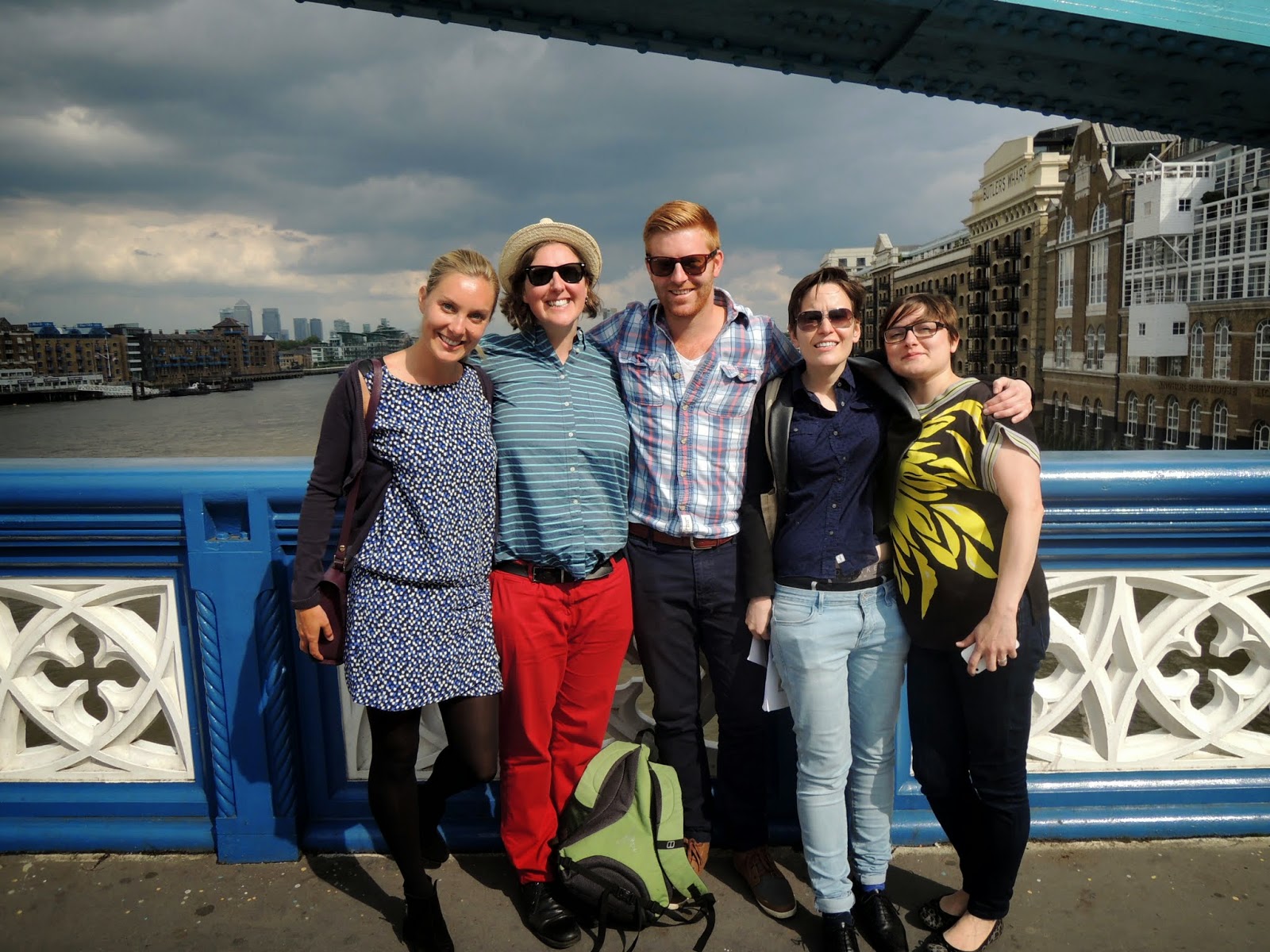 When I was young (very) occasionally I would visit Wycombe's resident meat market, the legendary Club Eden. Every town has one - the sticky-floored cesspit serving lurid alcopops and pints of gassy lager, where bouncers with thick necks the colour of corned beef give everyone the slow look up-and-down, from their Ben Sherman shirts down to their school shoes (no sportswear or trainers allowed, lest they lower the tone) before allowing them into the inner sanctum or condemning them to the last bus home.

It's been so long since those dark days that I'd almost forgotten quite how it felt to be scrutinized and looked over at the door, but I recently had the dubious pleasure of being reminded of such ignominy on our trip to the Shard with the Oz-based Princess Em and Robbie G. 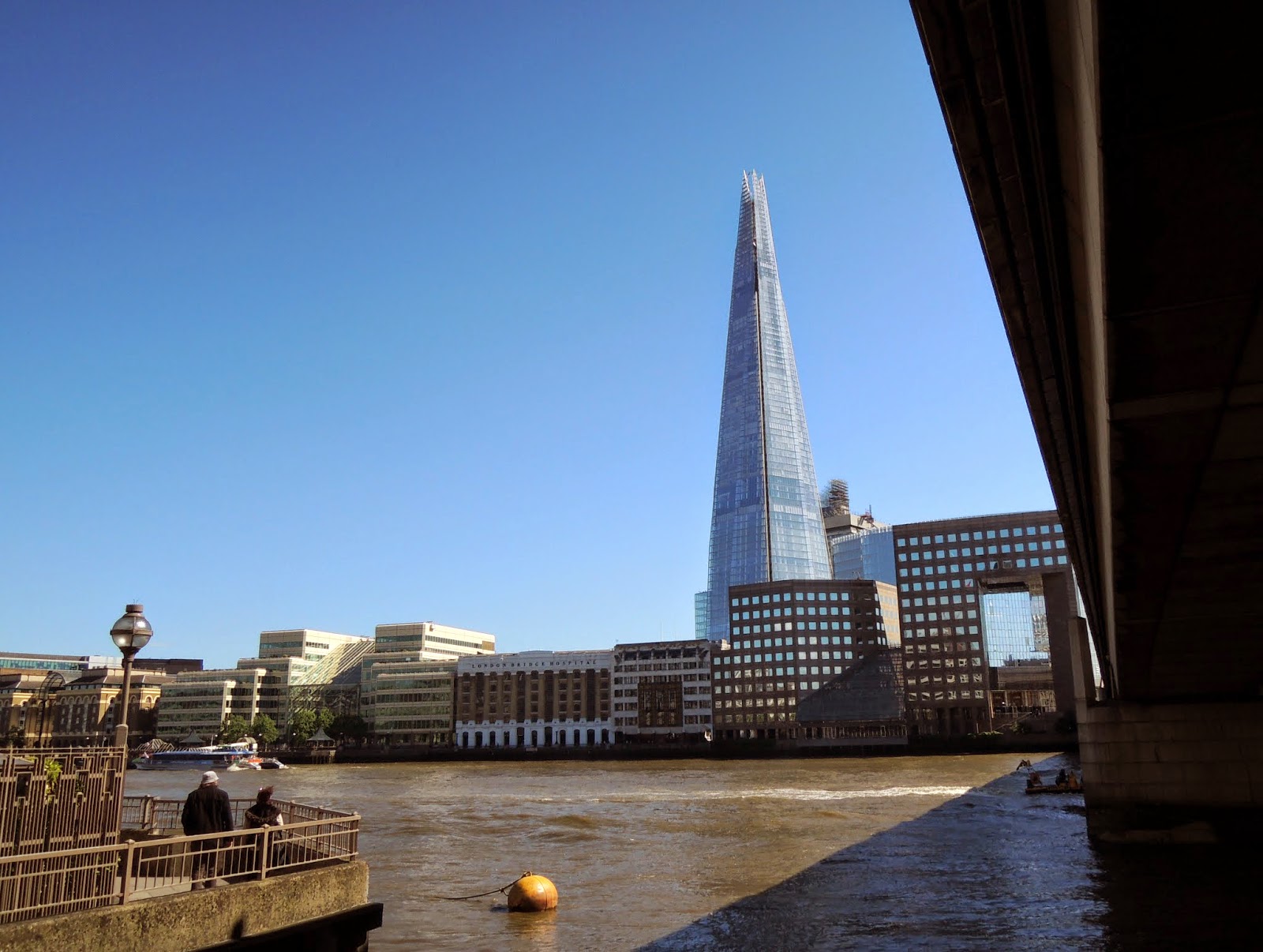 Looking forward to treating them to some booze with views, we approached the threshold as a clean cut and charming bunch of thirty somethings, all suitably dressed - Stealth had even cracked out her tuxedo jacket - until the first hint that all was not well as we attempted to gain entrance to the building. 'I'm not sure they will let you in' was the lady at receptions greeting to Robbie G - apparently the suede and canvas boots he was wearing were perilously 'trainer like'.

Running the risk and proceeding up in the lift to the Aqua Shard bar I saw, for the first time in fifteen or so years, the full-up-and-down sneer in action as we approached the doorman. Even now the exaggerated head flick as he eyed us all suspiciously makes me both chortle with amusement and bubble with indignation.

Feeling like naughty school children, we were finally admitted and lead downstairs to the bar area, but not before my backpack has been pretty much wrenched from my back and stuffed into the cloakroom on the way past. Here we waited in wonder for our next staff encounter might hold, until we realised that no one was remotely interested in us now we were inside, leaving the Ewing and I to go up and attempt to order at the bar ourselves. 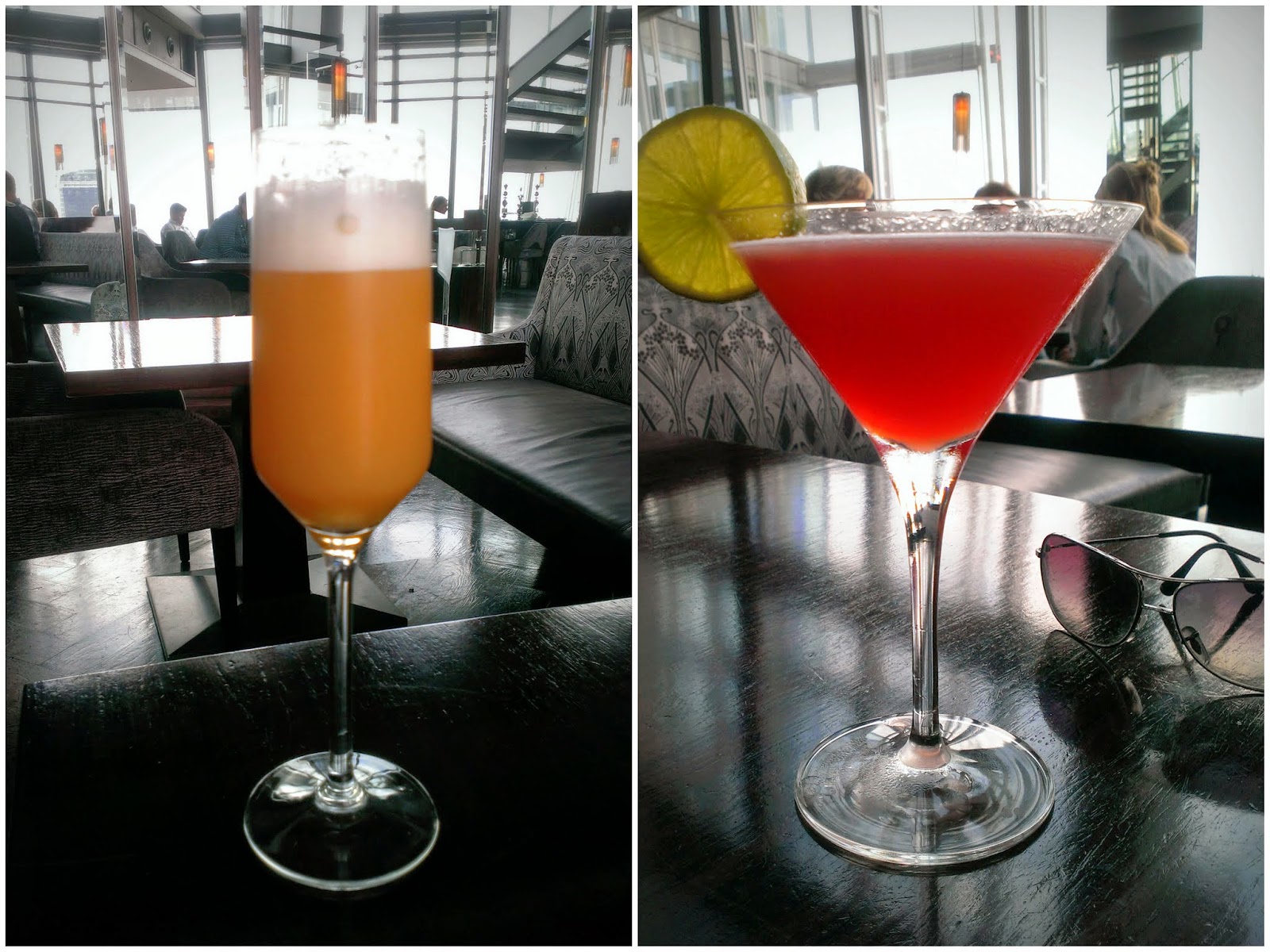 After a bit of a wait the cocktails, from three lists based on the English staples tea and gin, or from the Shard 'classics', were so so. Stealth and Robbie G's looked the part with their fancy fruit garnishes - although a good glug of Stealth's was spilt across the table by the waiter before she had the chance to try it - while the Ewing enjoyed her savoury Hot Tommy with tequila, watercress, chilli and lime.

Princess Emily's bloody mary, however - ordered spicy with just a little ice, but arriving with enough to sink the Titanic - was so unpalatably sweet she returned to the bar to ask for a top up of tomato juice. A fresh cocktail was offered, the new bar tender who sampled it didn't seem too impressed either, but refused as I'm not sure any of us relished the thought of hanging around there for much longer. 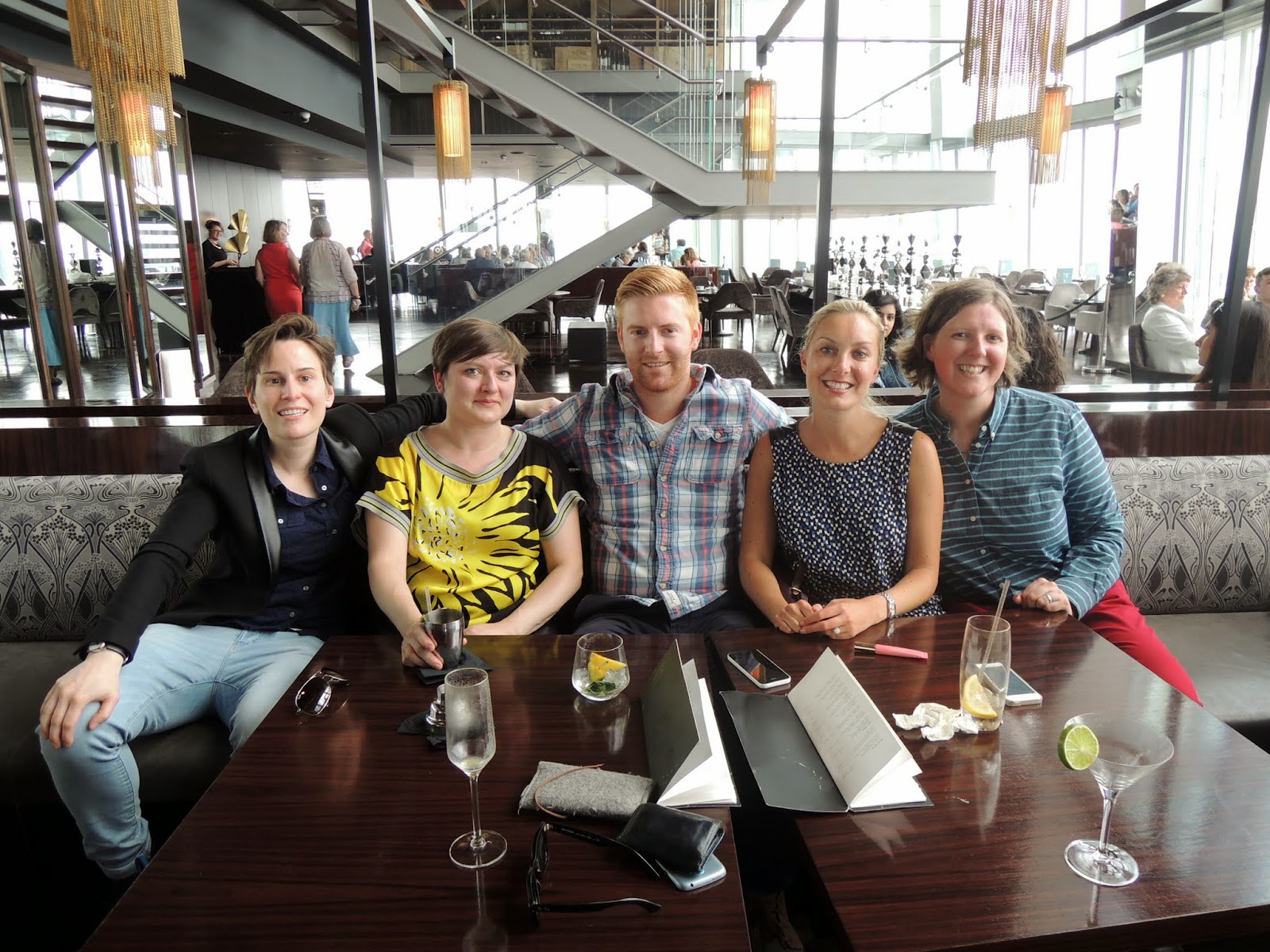 Luckily our ardour for the rest of the day's Big Smoke-based debauchery wasn't diminished by our trip up the tower - rather to the contrary, the our whole experience on the 32nd floor gave us all something to dissect in wonder through the rest of the day. It was rather a shame though, that, unlike the cocktails, the service left a somewhat sour taste. 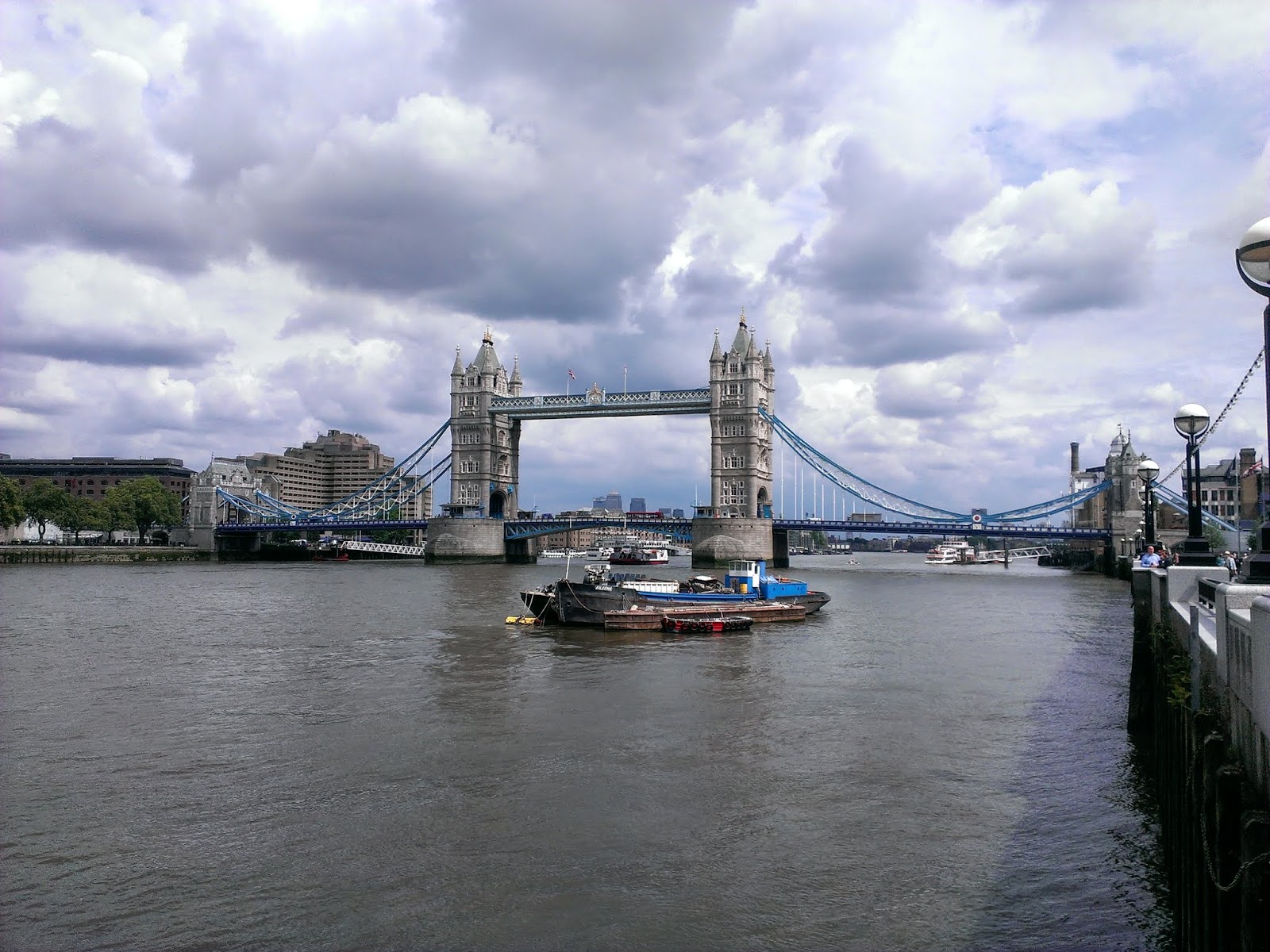 Next stop was the Tower Bridge branch of the Draft House to slake our thirst. Previously written about on the blog here, and a still a very nice place for a pint in this neck of the woods. Despite being renowned for a huge range of craft beer and ale - including from the Kernal, which you can pretty much see from their door - I have scant recollection of what we drank - other than it was plentiful. 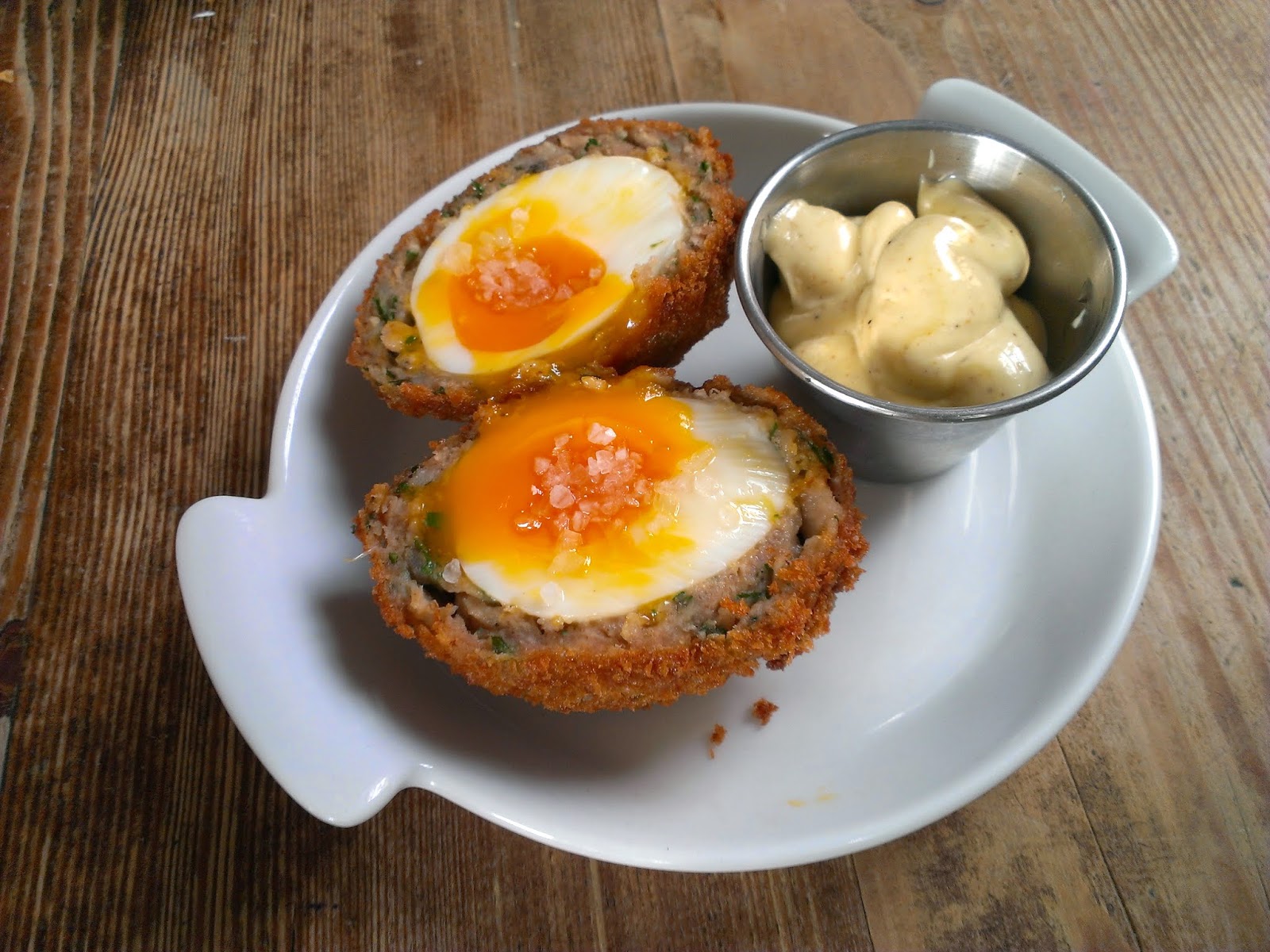 I do know I had something ferociously hoppy to start, followed by a half of their guest ale, rather a steal for these parts at £2.90 a pint. We also had a selection of snacks; their fabulous foot long scratchings; a 'boat' of southern fried wings served with Frank's Red Hot sauce for dipping; and their celebrated scotch egg with curry mayo which, even as a known egg hater, was too pretty not to get a snap of. 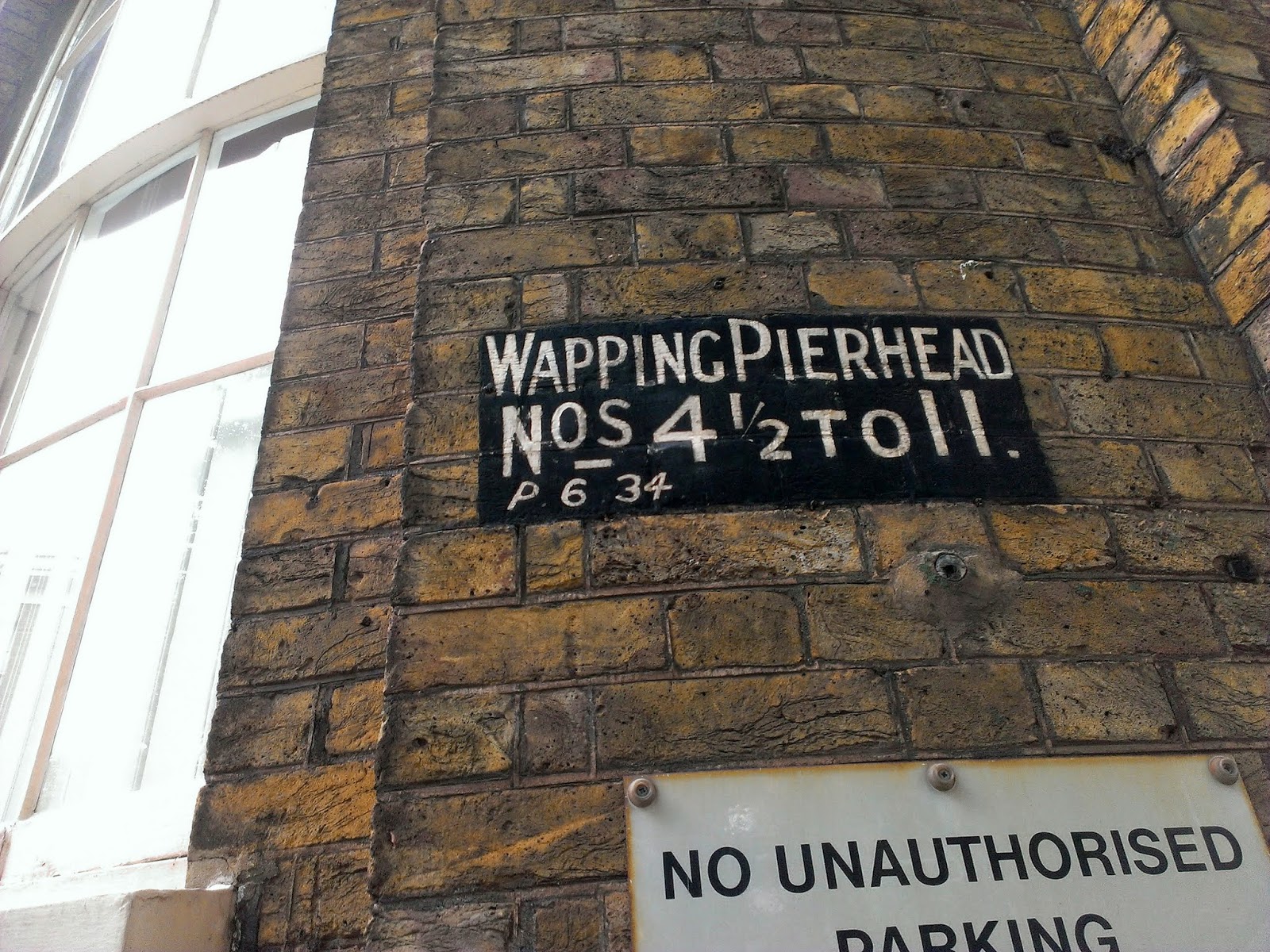 Next up, along Wapping High Street, was the Town of Ramsgate, so named for the fishermen from The Isle of Thanet who’d land their catches on the wharf outside. Reputedly the oldest pub on the Thames, the original hostelry was probably opened during the War of the Roses, in the 1460s, although the present building dates to 1758. 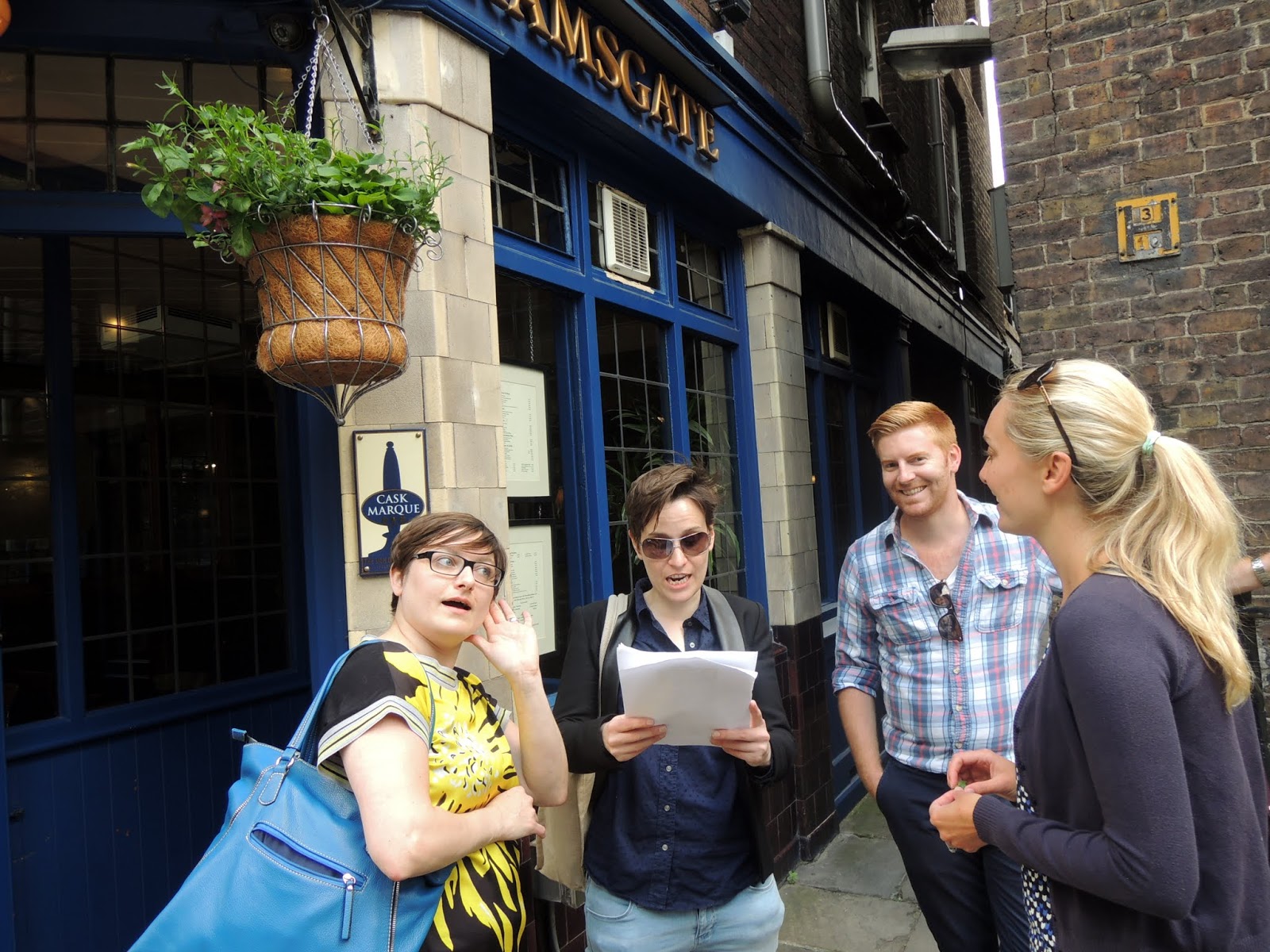 Shoehorned into a thin strip between Oliver’s Wharf and Wapping Old Stairs, the small terraced garden backs on to the water and at low tide you can still see the post that condemned pirates were chained to as the river rose.  Luckily we had Stealth, our able tour guide, who gave us a brief potted history as we sat outside and enjoyed a pint of Ghost Ship, probably quite appropriate tipple for these parts. 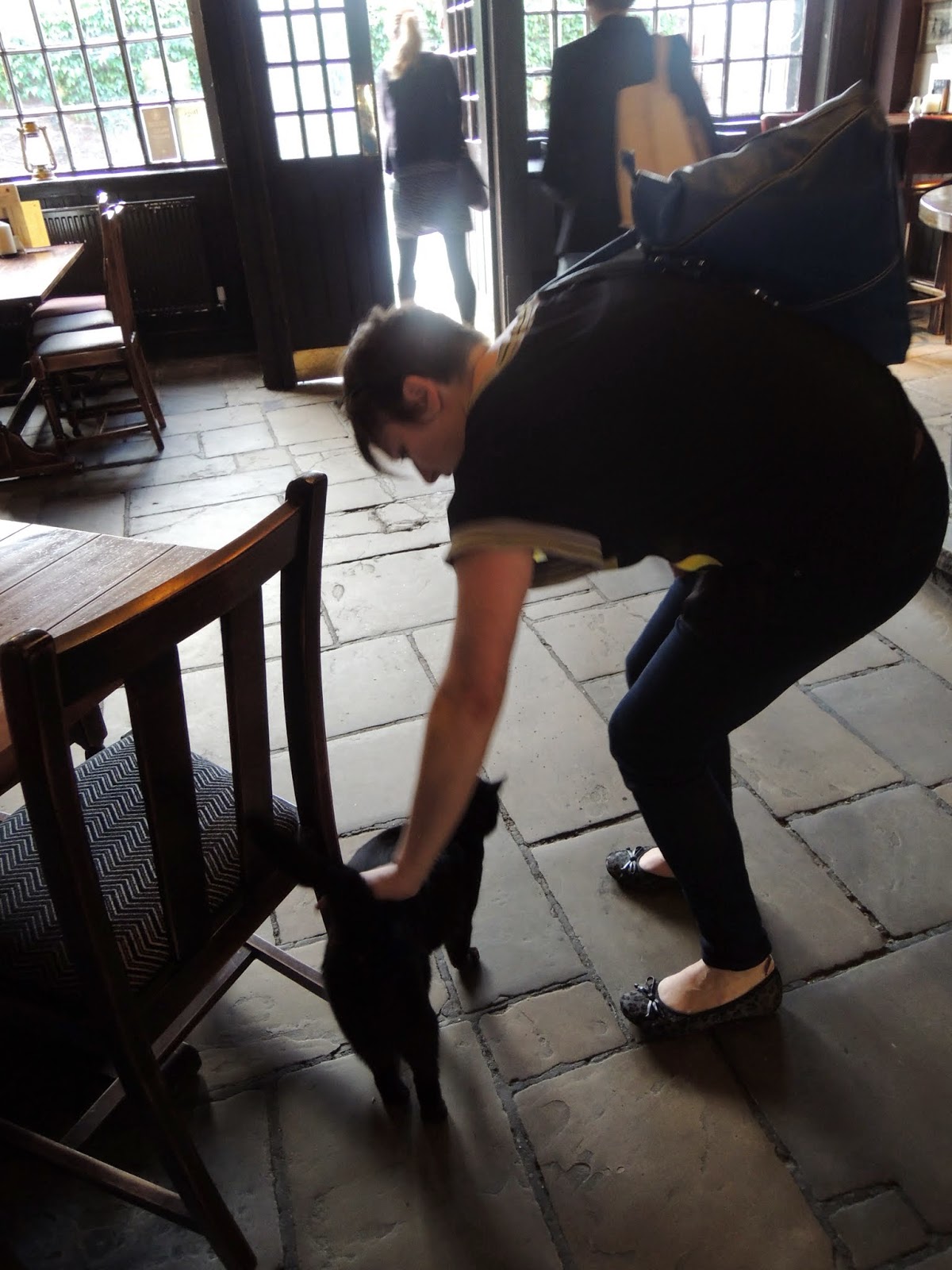 This is an old-fashioned proper boozer, oozing history from its rickety timbers and, thankfully as yet, untouched by the hand of sterile commercialism. There is a menu of pub classics, served in hefty portions – fish and chips, ham and eggs, steak and kidney pud and spotted dick- and weekday lunches are available on a buy one get one for a pound deal, making it a perfect refuelling stop for those on a river walk (or pub crawl). There's even a resident cat, which had no chance of getting past the Ewing... 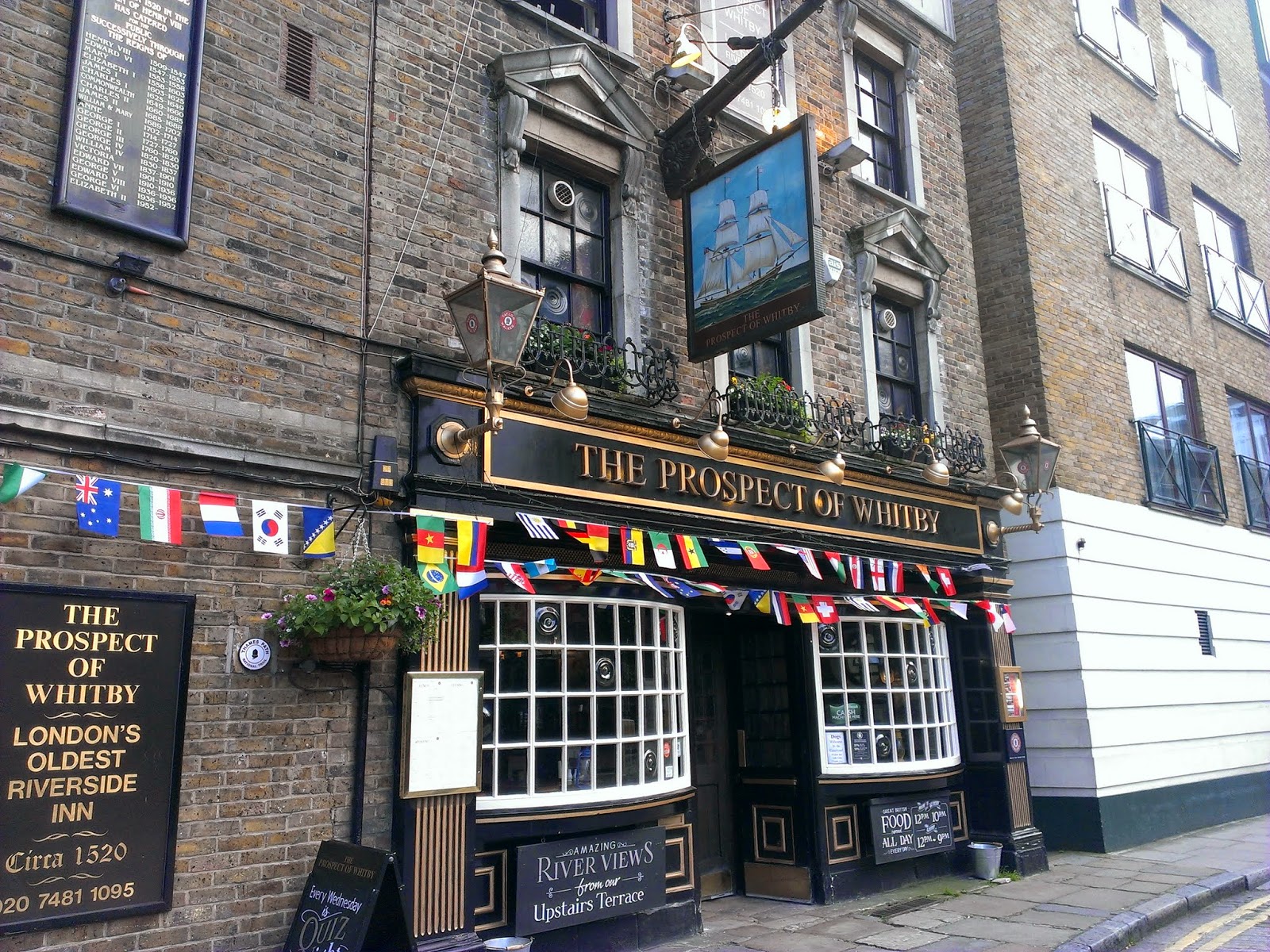 We had room for one more port of call before dinner, meaning a drink at the Captain Kidd, a few doors from the town of Ramsgate, was sadly jettisoned so we could fit in a half at the another previous favourite, the Prospect of Whitby. While the Prospect may lack some character compared to our previous stop, it remains a classic pub for a reason and it would be hard to pass by without calling in for at least one whistle-wetter.

The Whitby is now owned by the Taylor-Walker chain, which seems rather a shame after its chequered history dating back to 1520 and with its previous patrons including Charles Dickens, Samuel Pepys, Judge Jeffries, Whistler, Turner and Richard Burton. Rodney was even seen walking out of there when Uncle Albert went missing in Only Fools and Horses. 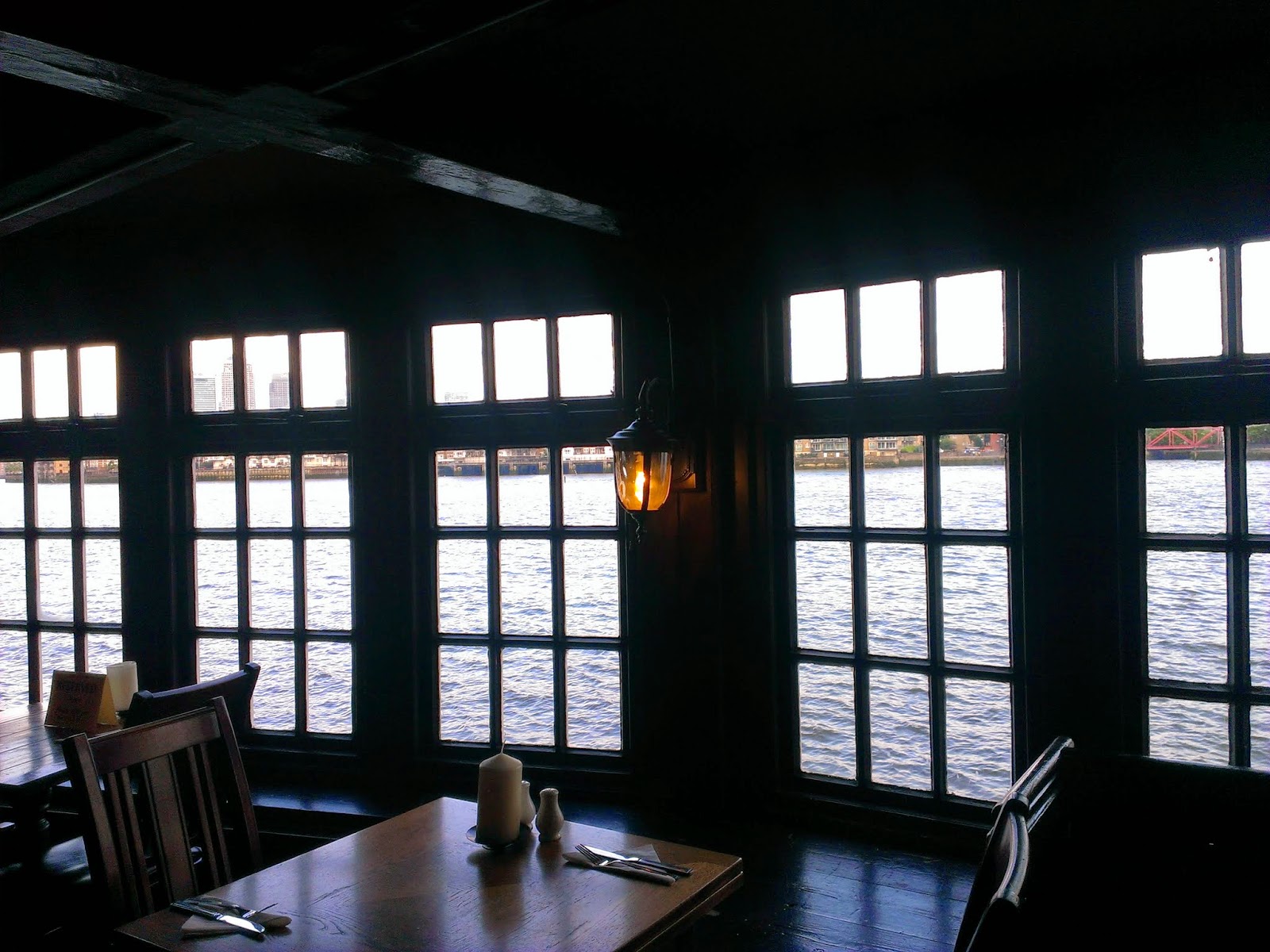 Despite the slightly soulless atmosphere and generic menu and drinks list, the service is friendly and views are still unbeatable; although I find sitting at one of their window tables, with the Thames lapping right up against the side of the glass, makes me feel decidedly queasy (nothing to do with the beer, of course). 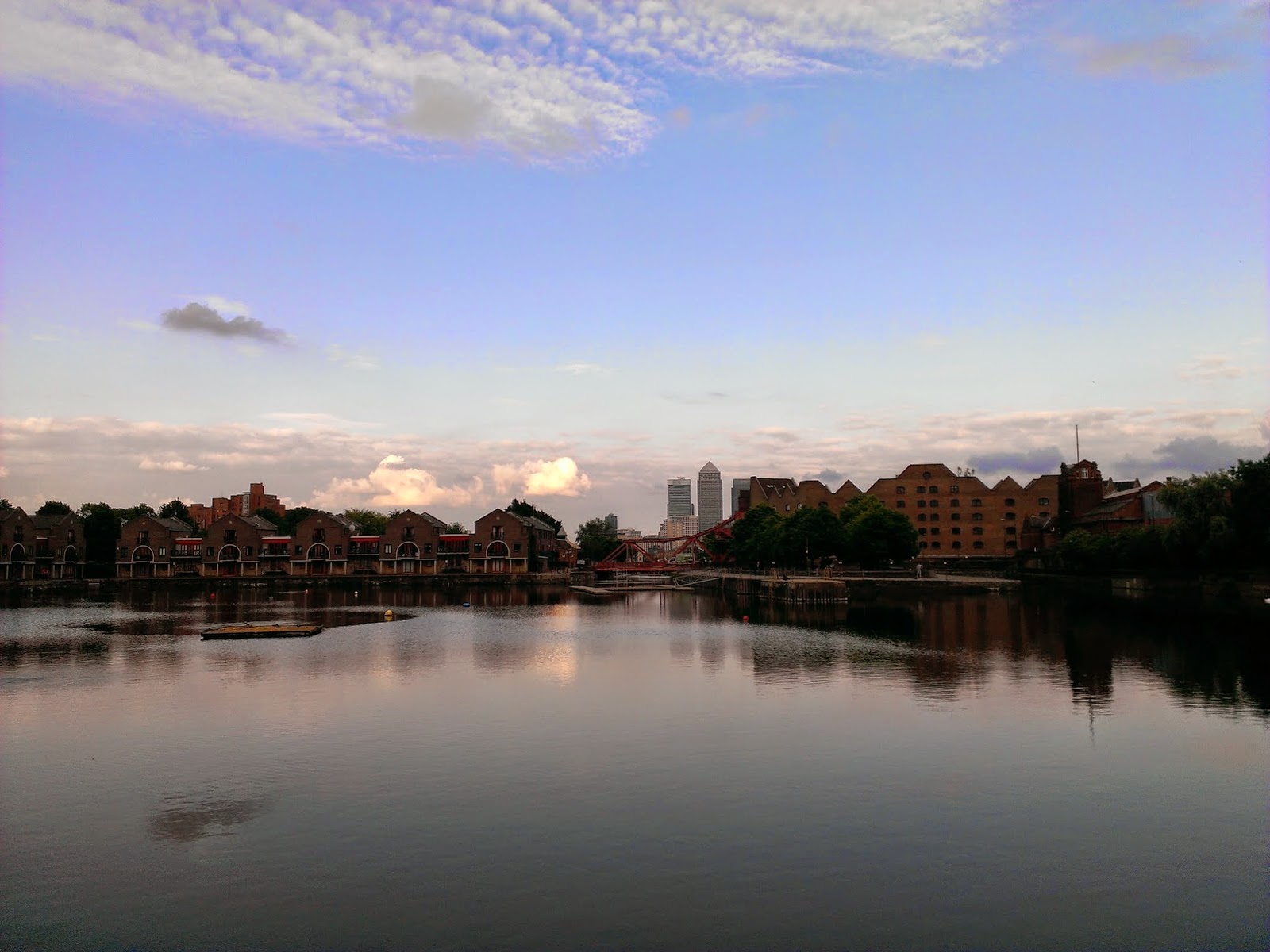 The final stop saw us wind ourselves around the Shadwell basin, stopping to admire the stunning vista across the water to Canary Wharf - who knew urban East London could look so calm and beautiful - and into Whitechapel for a ‘proper’ curry.

One of my little sister’s greatest loves, and the thing she misses the most living in Sydney - other than her older sister of course – is a good curry. Which, like decent bacon and sausages, is something the Aussies have yet to properly master; surely a cash cow (or pig) for some enterprising entrepreneur.

While they may have hours of glorious sunshine, beautiful sandy beaches and a laid back lifestyle anyone would be envious of, the joys of a sweet and sour lamb dhansak; fiery chicken vindaloo, sag bhaji and fluffy nan bread remain elusive. Even if they often have to be endured with a side order of drizzle when enjoyed on these shores. 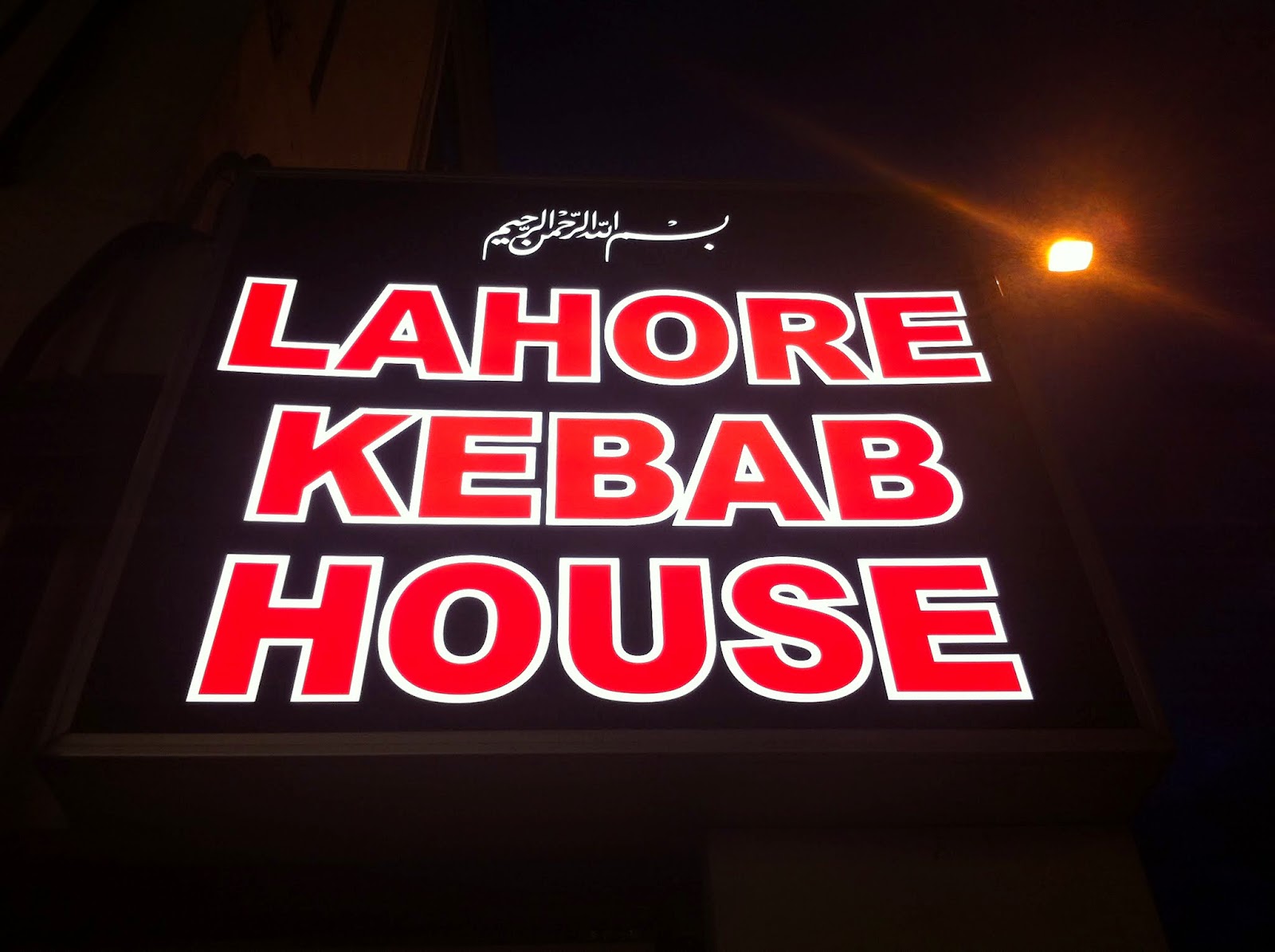 As a consequence of this deprivation everybody wants to take her and the G out for an Indian when she’s back home, not really much of a hardship, I suppose, but I don’t envy the co-passengers on the flight back to Oz.  While there are several decent restaurants near my house, I wanted to give them a proper East End experience, complete with the thick fug of grilled meat smoke hanging in the air and wipe down plastic tablecloths.

Last time I was in this neck of the woods we had gone to the Tayabs for chops and dry meat (and the memorable sight of Stealth prostrate in the corridor with some sort of bilious attack), so this time we chose one of their near rivals, Lahore Kebab House, to see how they’d stack up.

Lahore Kebab House. The food is karahi chicken karahi gosht, butter chicken bhindi gosht sag aloo, peshwari and garlic nans, tandoori rotis, rice and a plate of poppadoms - ordered by Stealth after the main dishes arrived 'it isn't the same without a poppadom.' 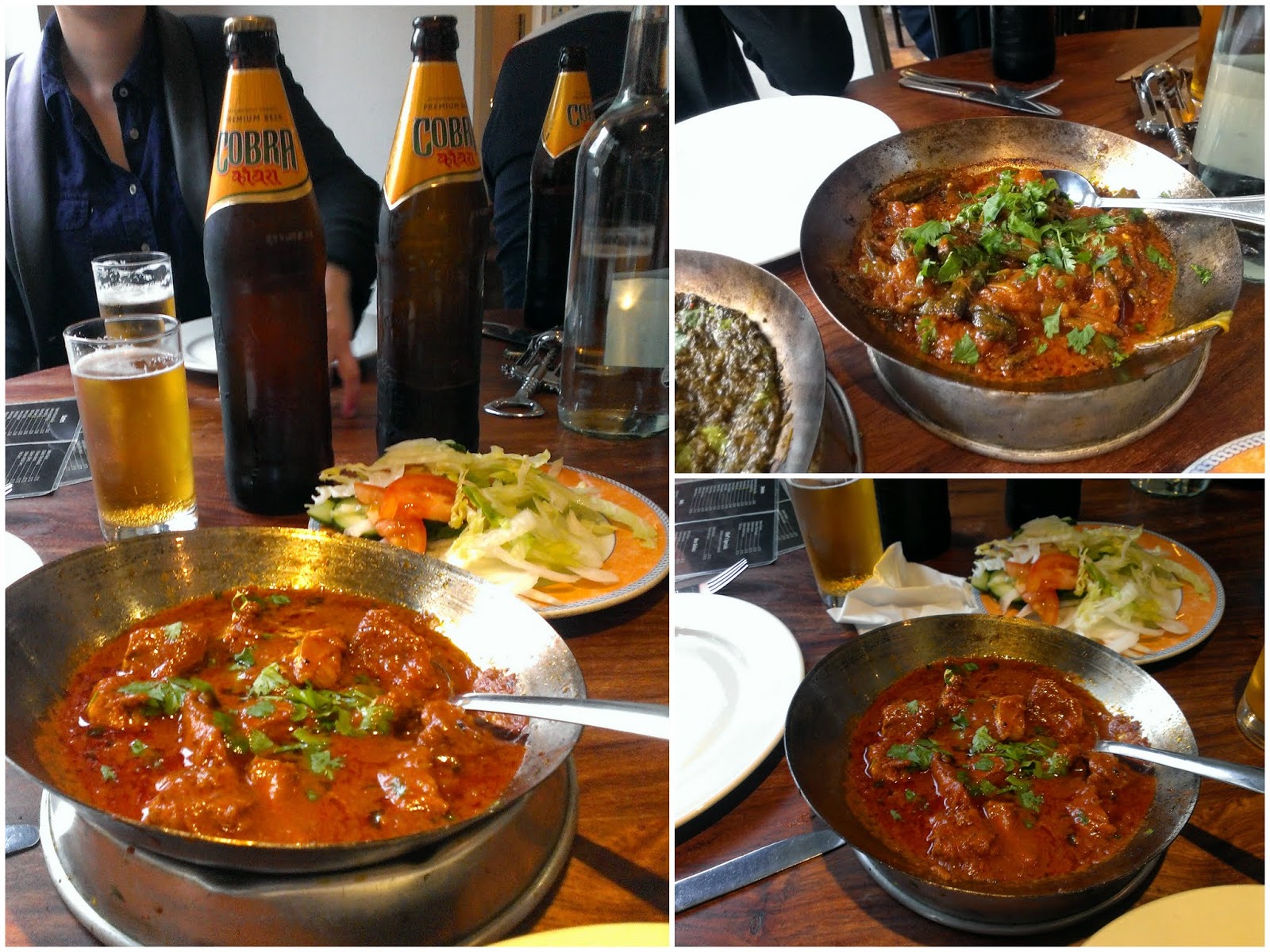 Décor is basic, to be kind, but the buzz from the rapidly filling room - even on a Monday night - and the heat and clatter coming from the kitchen were promising signs. As with many of the restaurants around these parts, LHR is unlicensed but you can BYO, meaning all the nearby corner shops have chilled cabinets stuffed full of large bottles of icy Cobra.

Dishes arrive with a lightning rapidity from the kitchen, a plate of salad to start followed by curries that are served in well worn karahi dishes set on hollow metal rings, followed by a basket of freshly baked bread and sides of chutney and fluffy pilau rice. I rued the fact I couldn't manage a plate of their famed chops, but the rest of our food was good, especially the karahi dishes and the bhindi gosht, rich chunks of mutton cooked with okra in a spicy gravy. 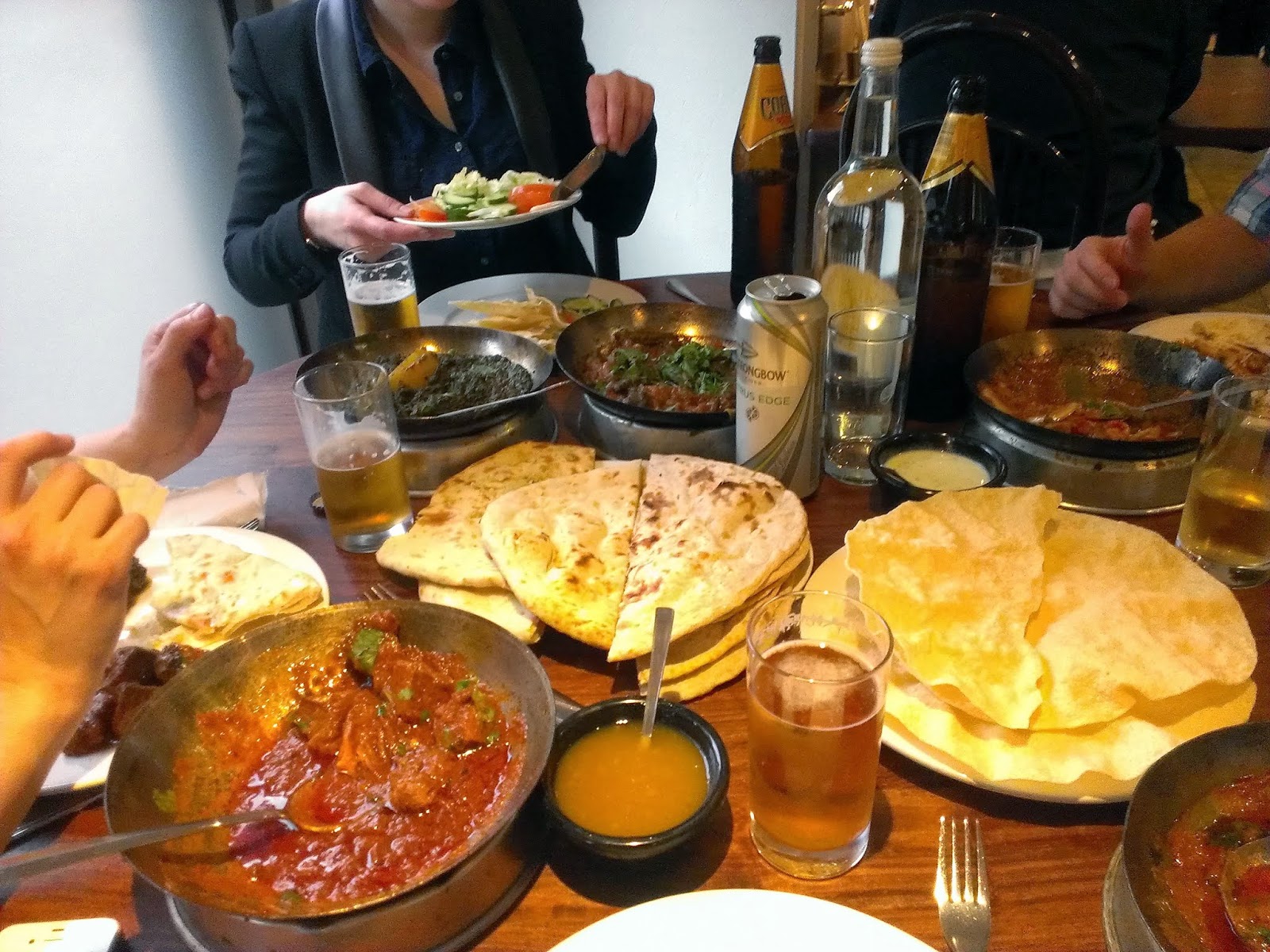 Deserts comprise of the tooth-achingly sweet familiar favourites; gulab jamun, kheer, halwa and kulfi, but we made do with a few more bottles of Cobra while we marvelled that our feast, sans grog, had only just reached double figures - 11 quid - per head. Less than the price of a drink at the Shard, no suspicious eyeing up at the door, and with a bagful of leftover nan bread to take home for breakfast to boot.

From the sublime to the ridiculous, or vice versa, I still loved experiencing some of the joys of my wonderful hometown, shared with some of my favourite people.