Fish and Chips By the Sea 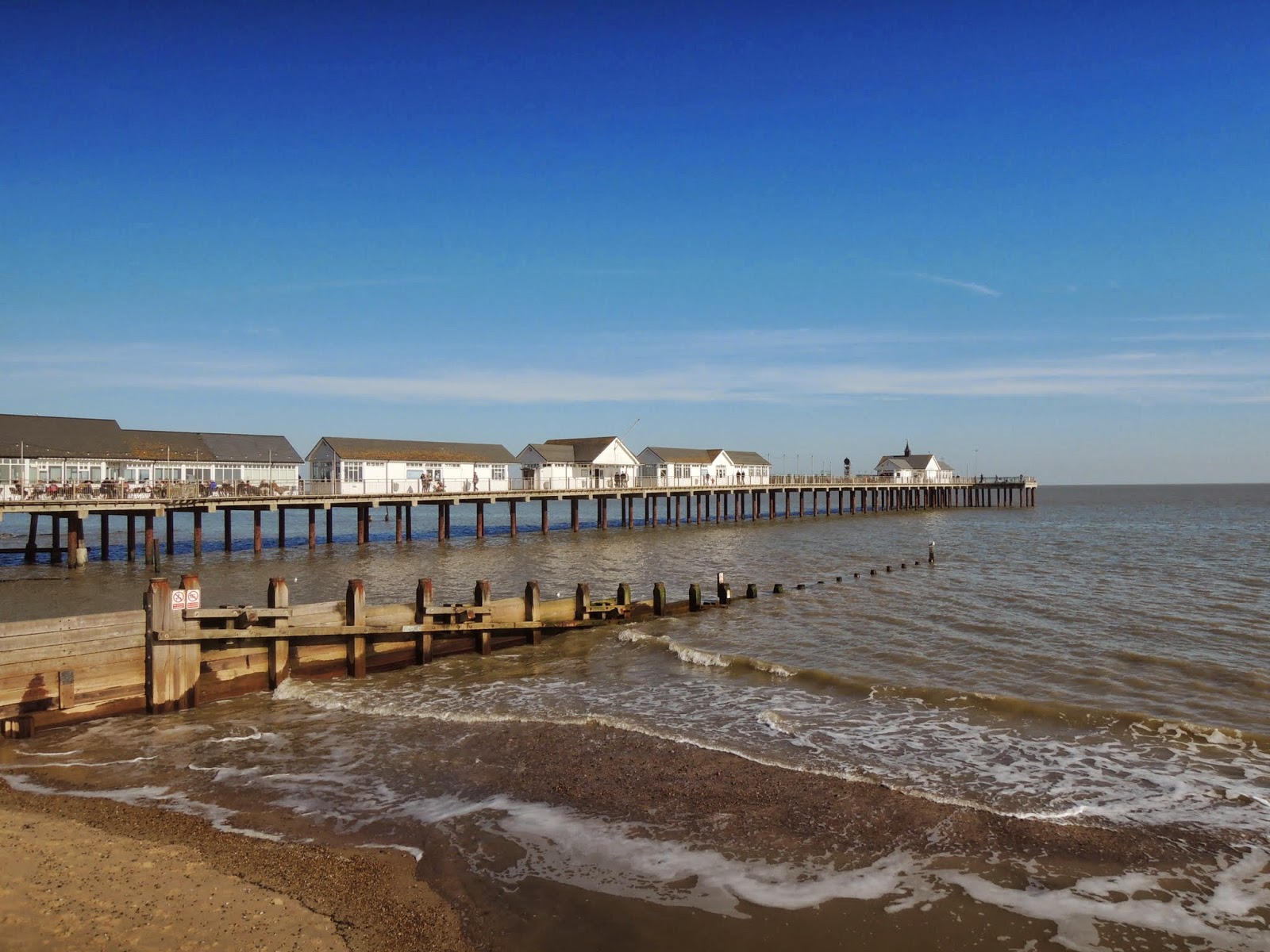 Fish and chips on the beach - There can be very few things finer to an Englishman than carefully cradling your tightly -parcelled haul down to the sea front,  to be greeting by the pleasingly hot sting of vinegary fug as you unwrap your cache. Never mind if the next twenty minutes are taken up by tricky multi-tasking of fending off seagulls and turning your back to errant wind that threatens to blow sand into your dinner; that first hot chip holds a magic like no other. 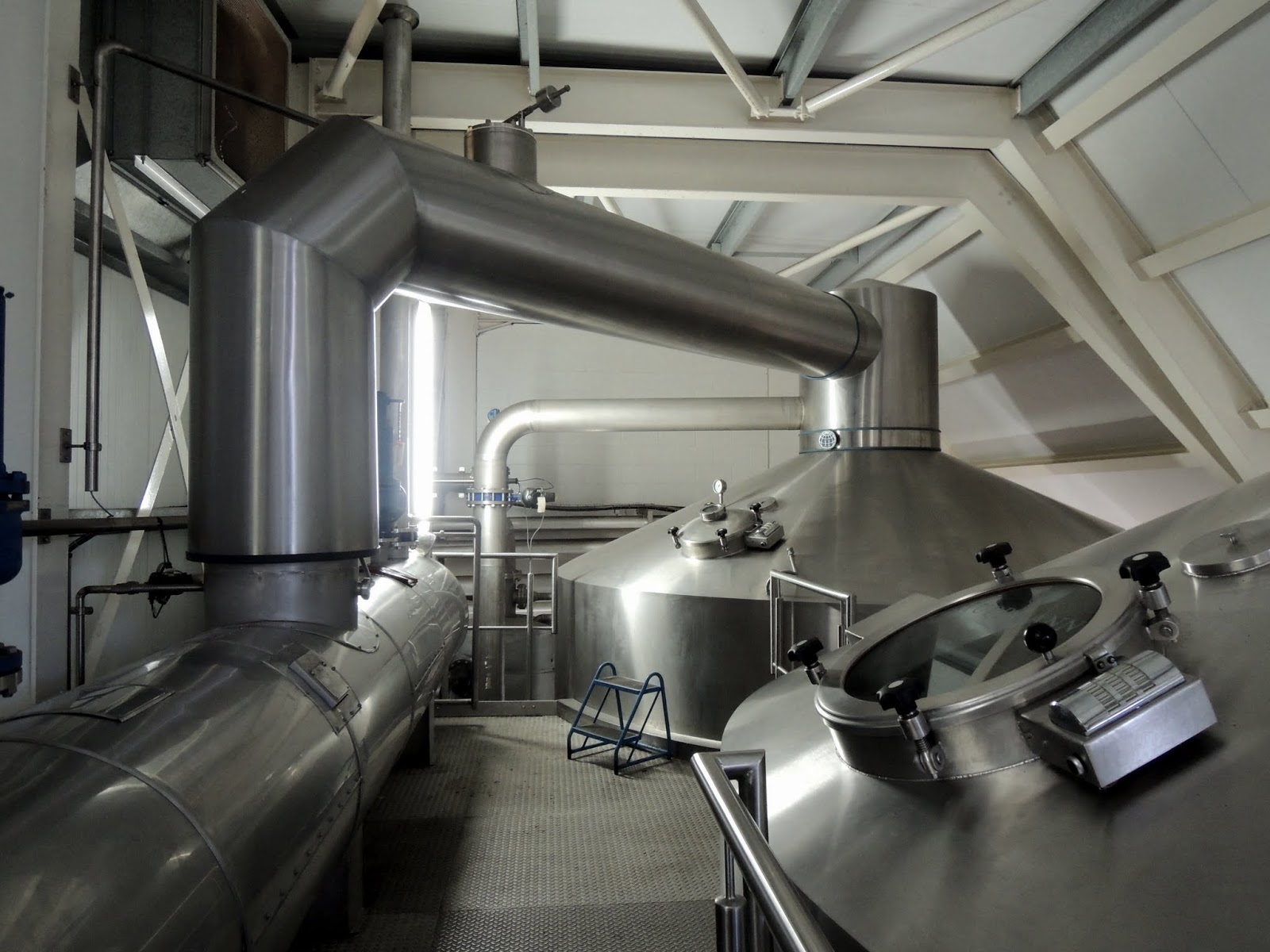 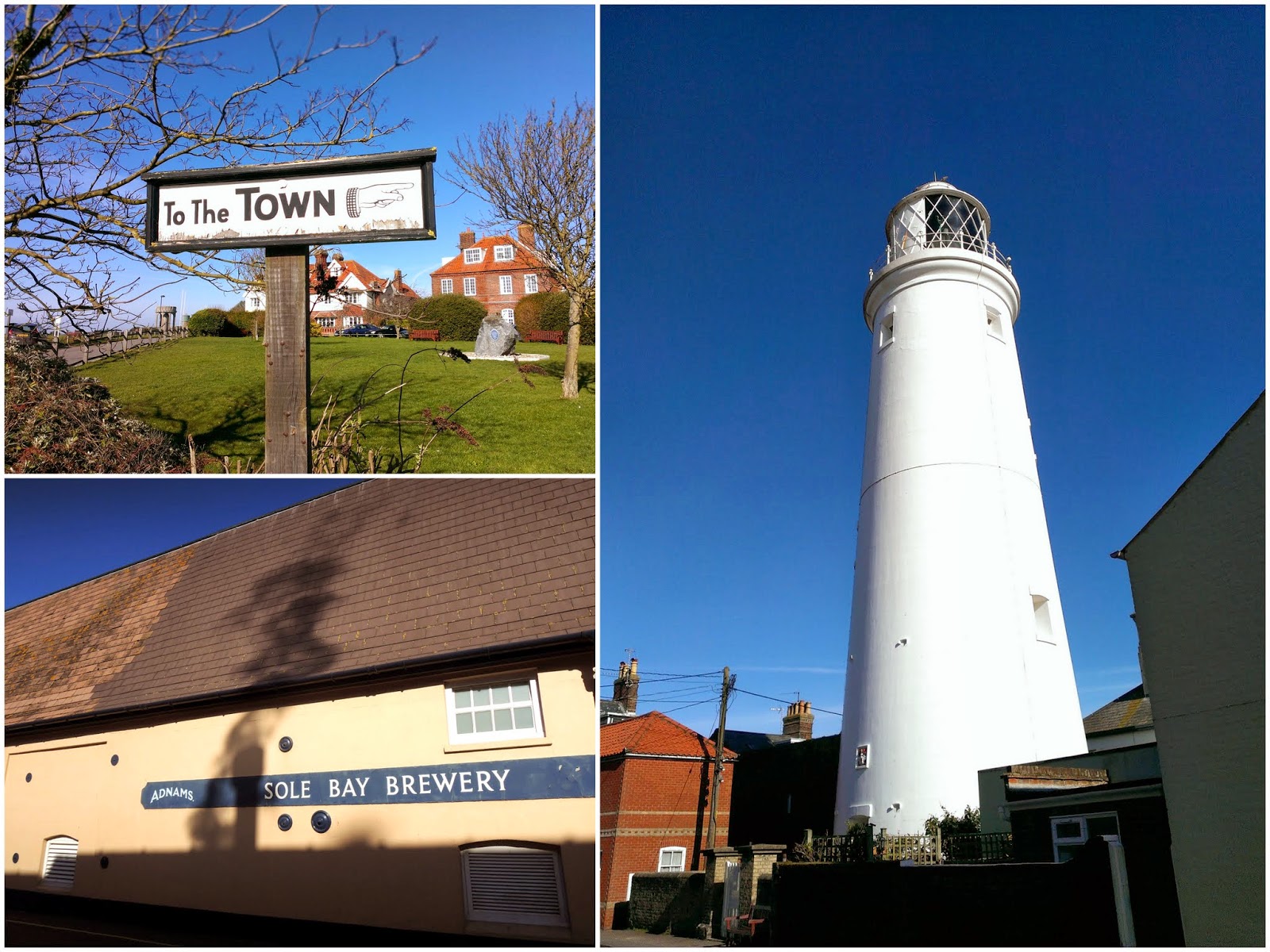 The fine spring weather on our recent trip to Suffolk fortunately gave us plenty of opportunities to eat our national dish al fresco. After a morning spent taking a great tour of the local Adnams Brewery – stopping by both their private bar to try the beers followed by their shop/café to sample some wines and spirits - we took a punt on one of their pubs, the Sole Trader, a stone’s throw from the brewery and just behind the famed Lighthouse for some lunch.

Of course, we weren't the only ones to have the same idea, and a large queue already at the door propelled us along the sea front in search of sustenance, ending up at the Southwold Pier Café. 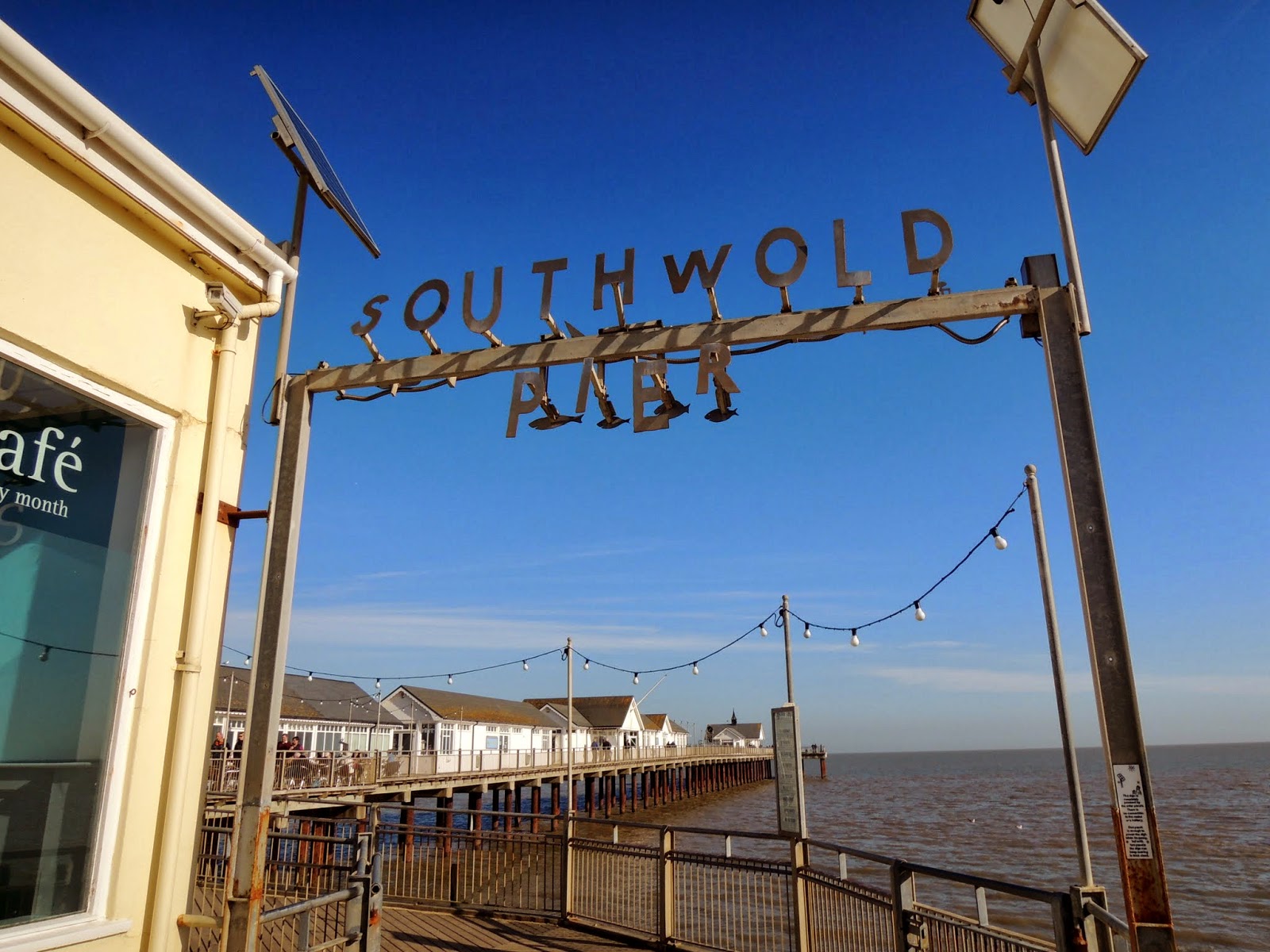 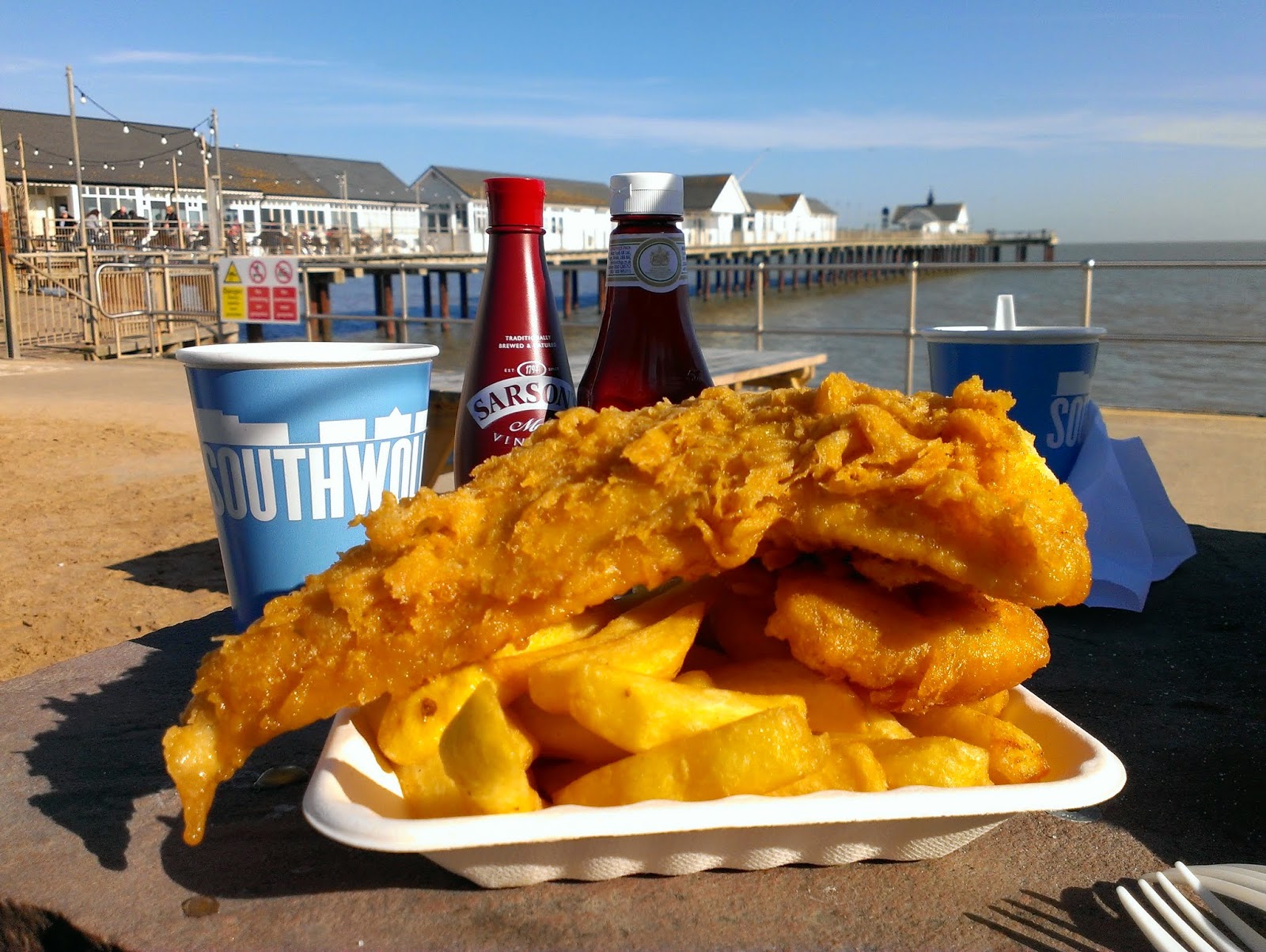 My expectations were low; at over twenty quid for cod chips, a wally and a cup of tea twice, these were prices for London’s second home owners (a two up two down next to the brewery will set you back a cool half a million, and only two homes in the street are occupied full-time) not day trippers. 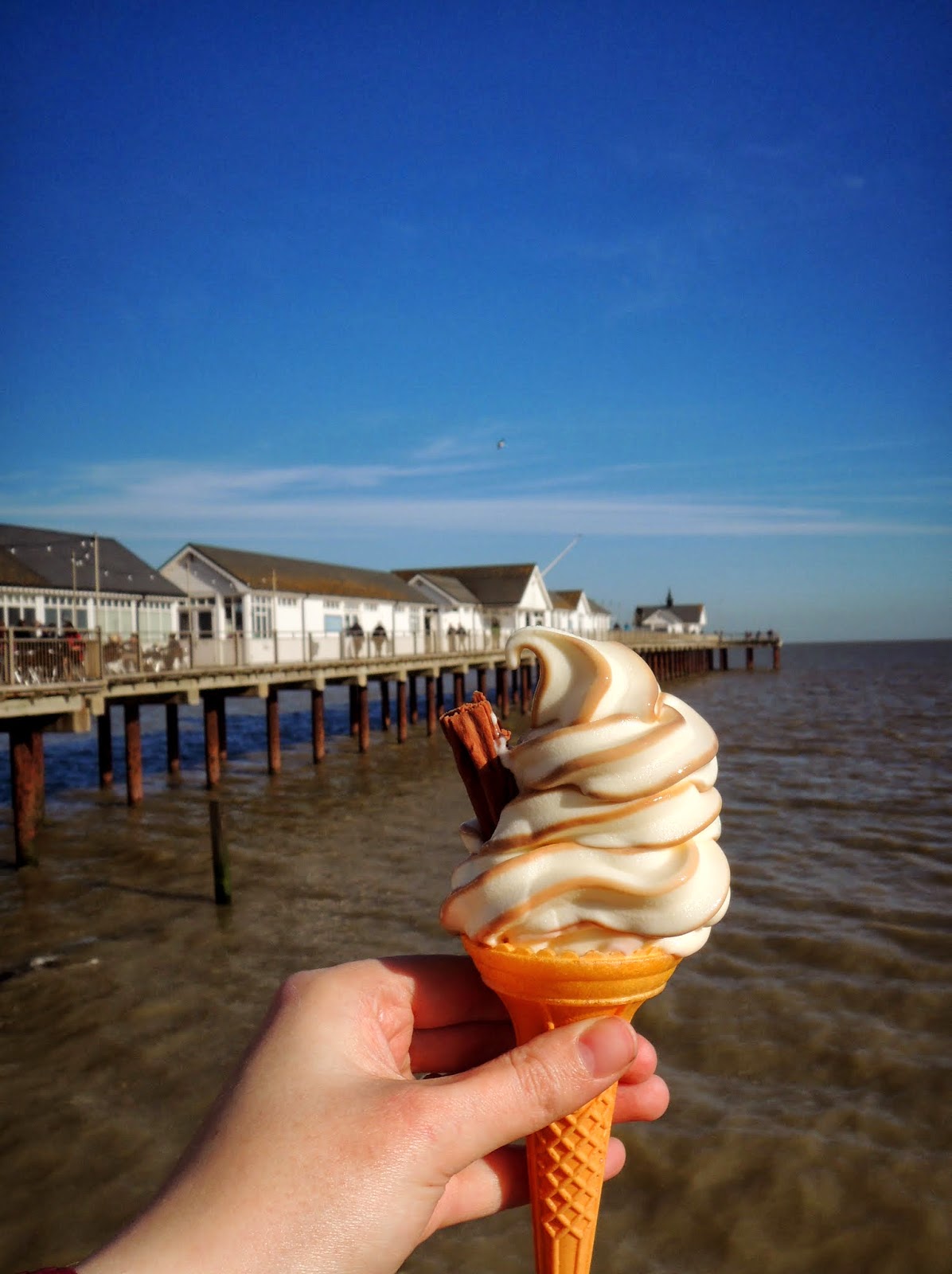 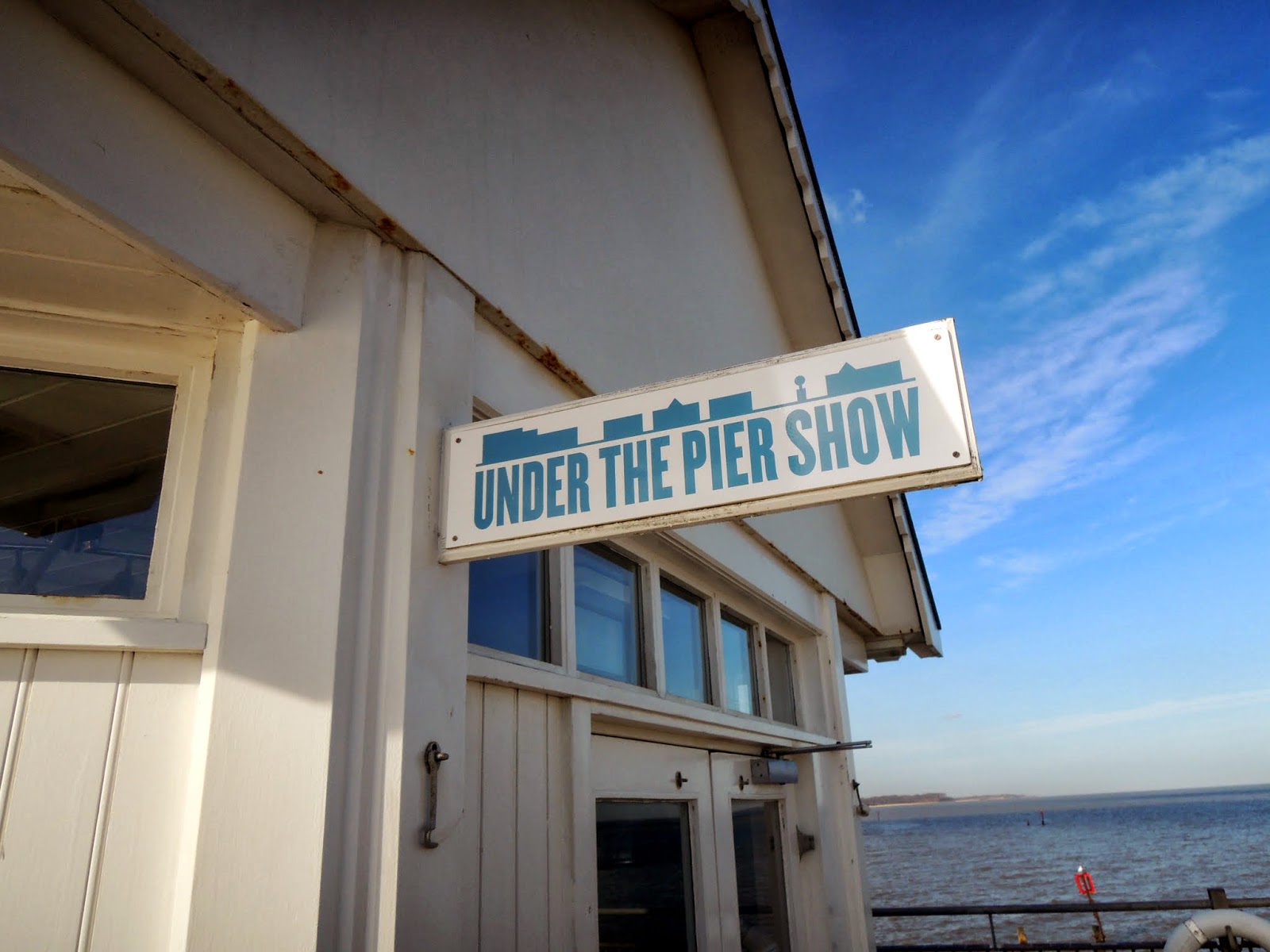 Of course it wouldn’t be a trip to the seaside without and Mr Whippy and a walk down the pier, and Southwold has something that sets it apart from the standard penny slot machines and kiss me quick hats. Here is the home of artist Tim Huffkin's arcade on steroids, the utterly wonderful Under the Pier Show. 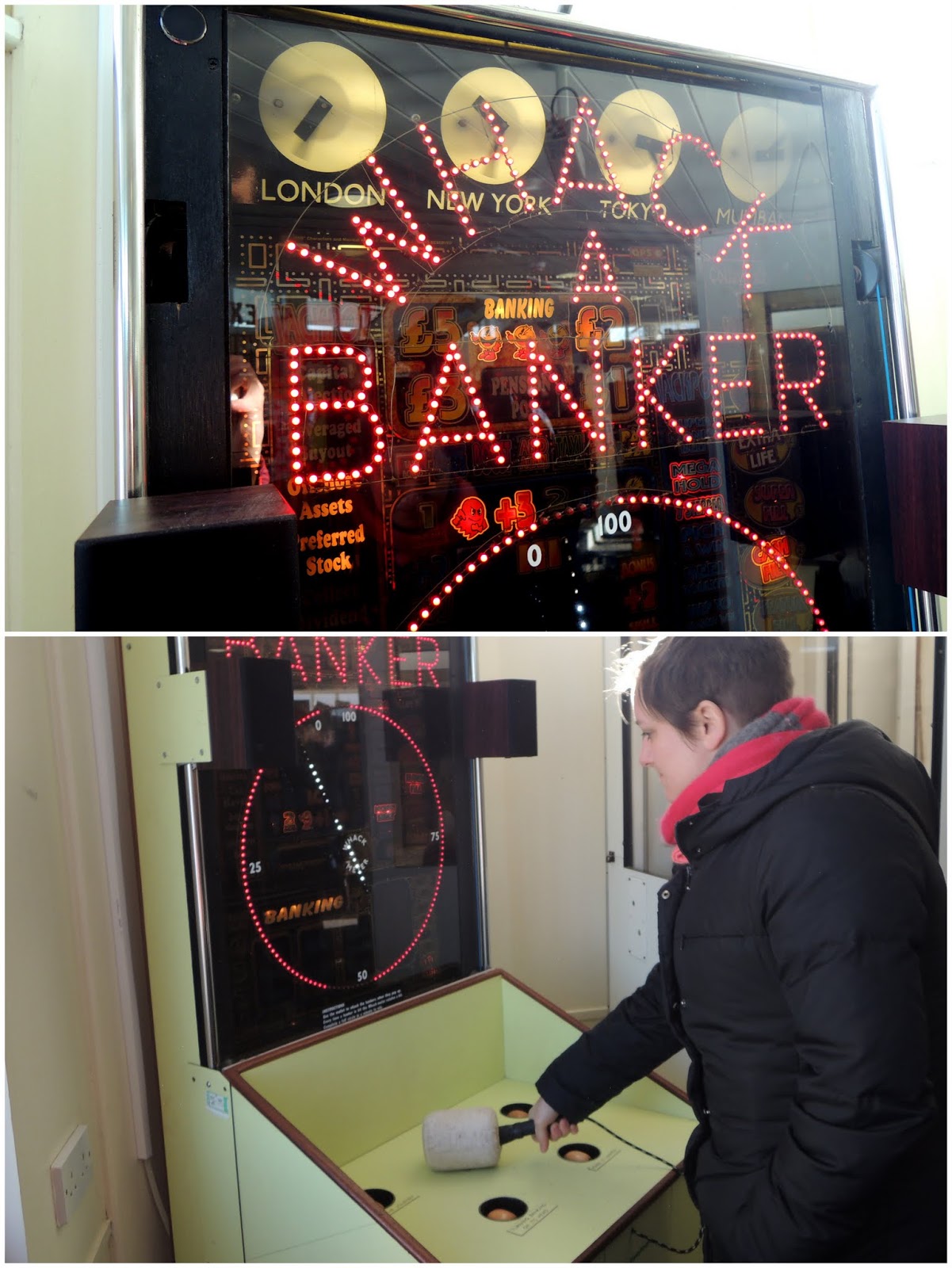 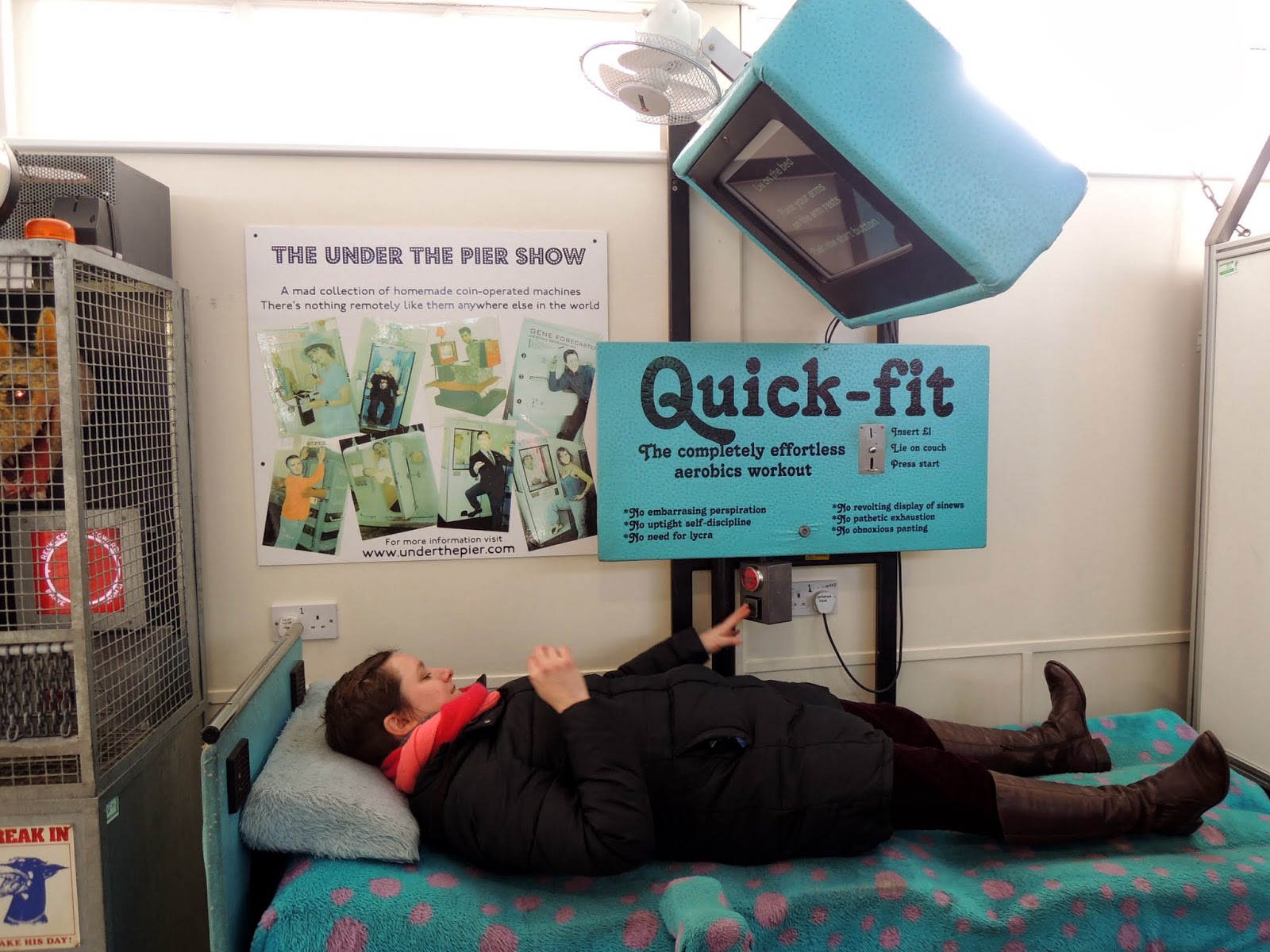 The Under the Pier show truly is English eccentricity at its best. We spent a happy hour or so busily feeding handfuls of coins in various machines ranging from Whack A Banker - 'At last! A truly rewarding banking experience'; to the Quick Fit couch - 'A completely effortless aerobics workout'. 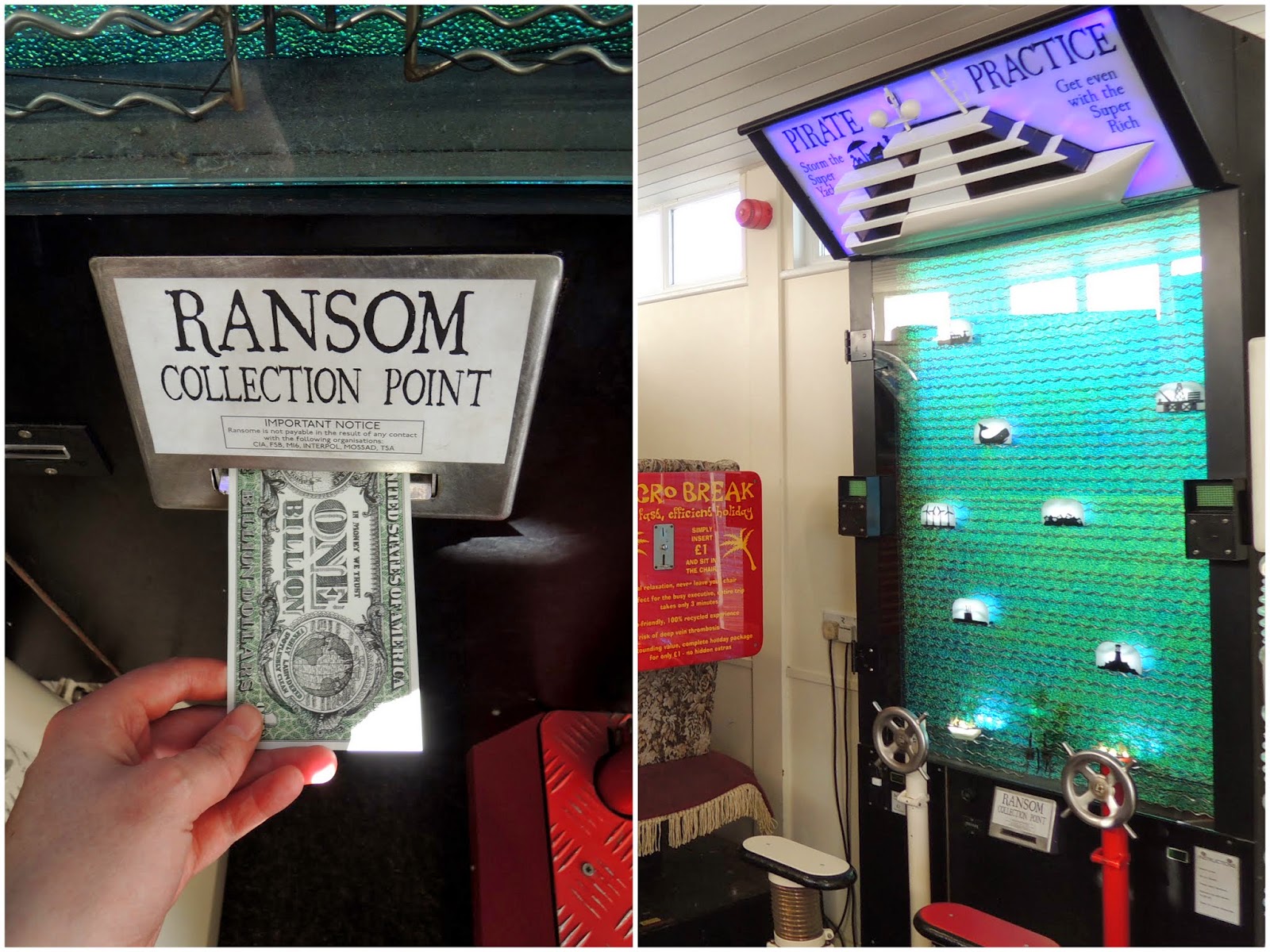 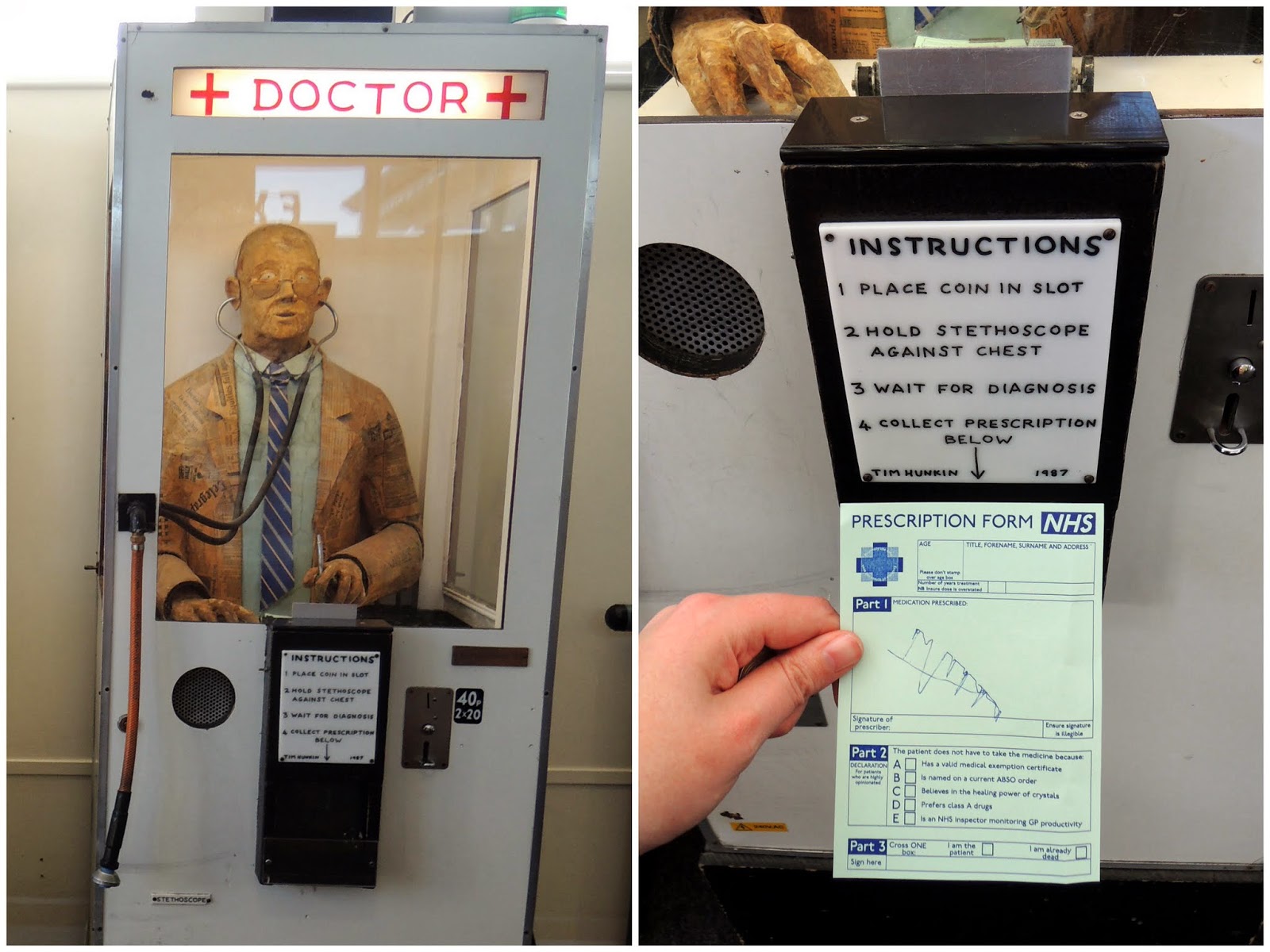 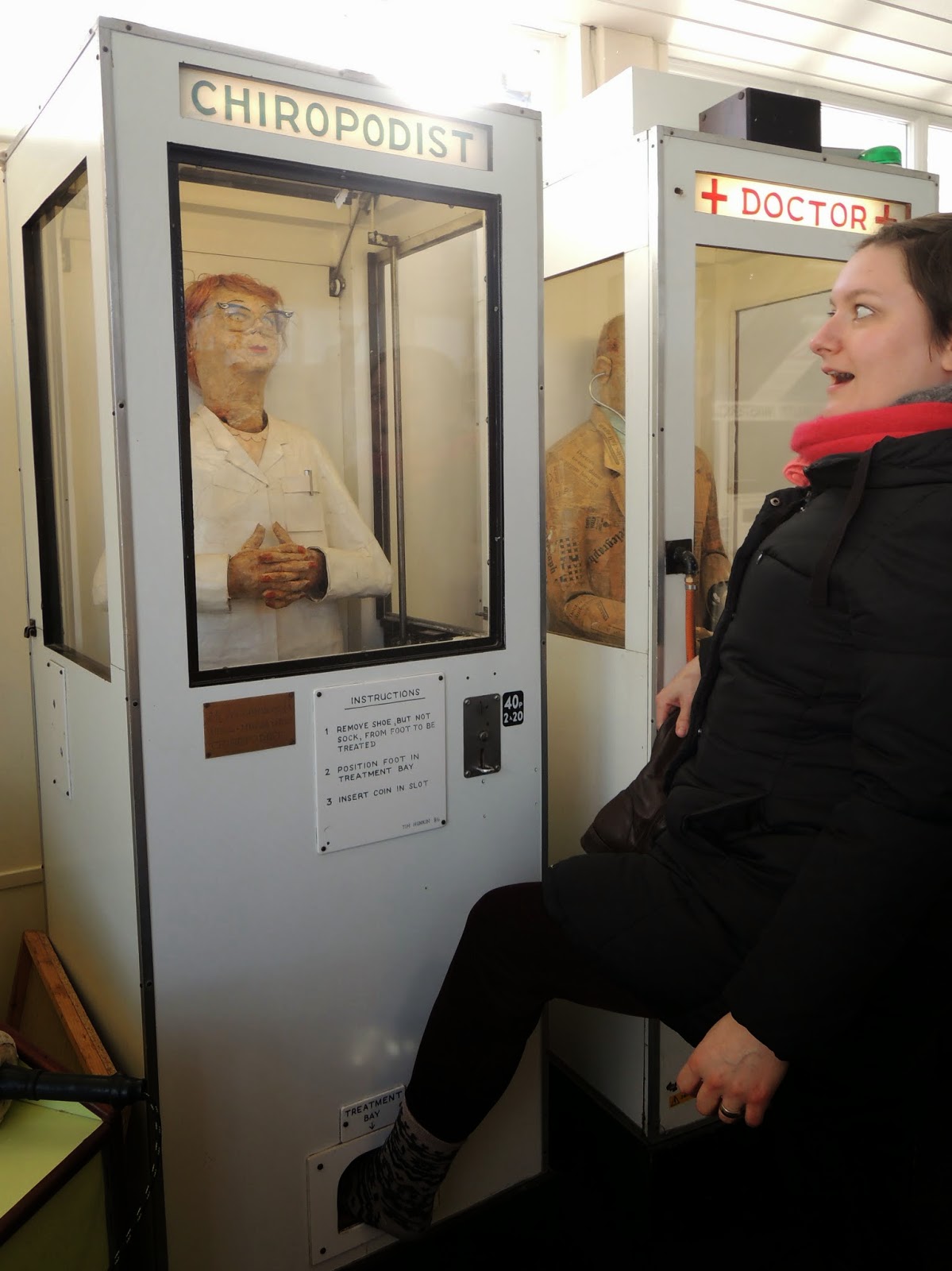 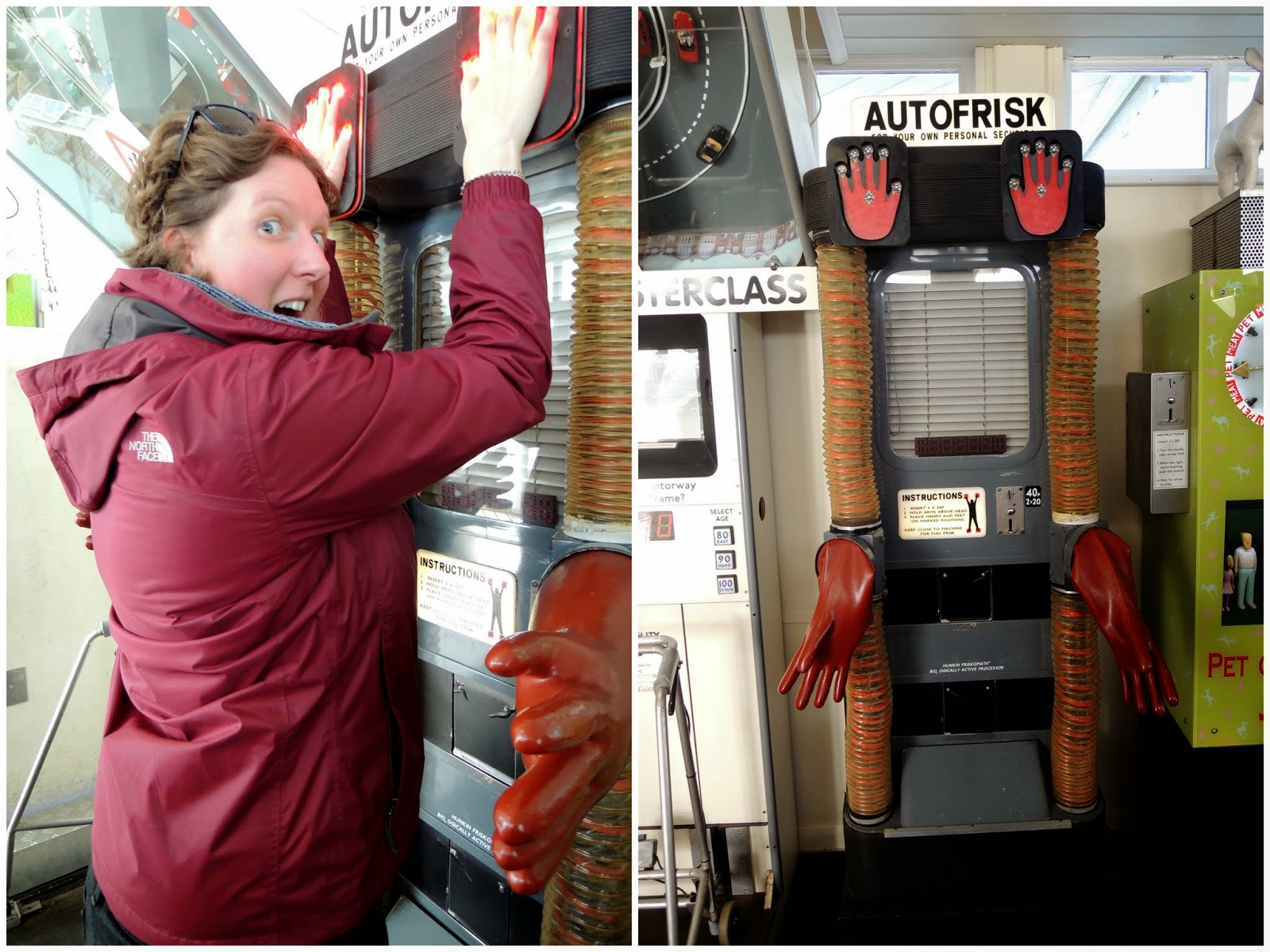 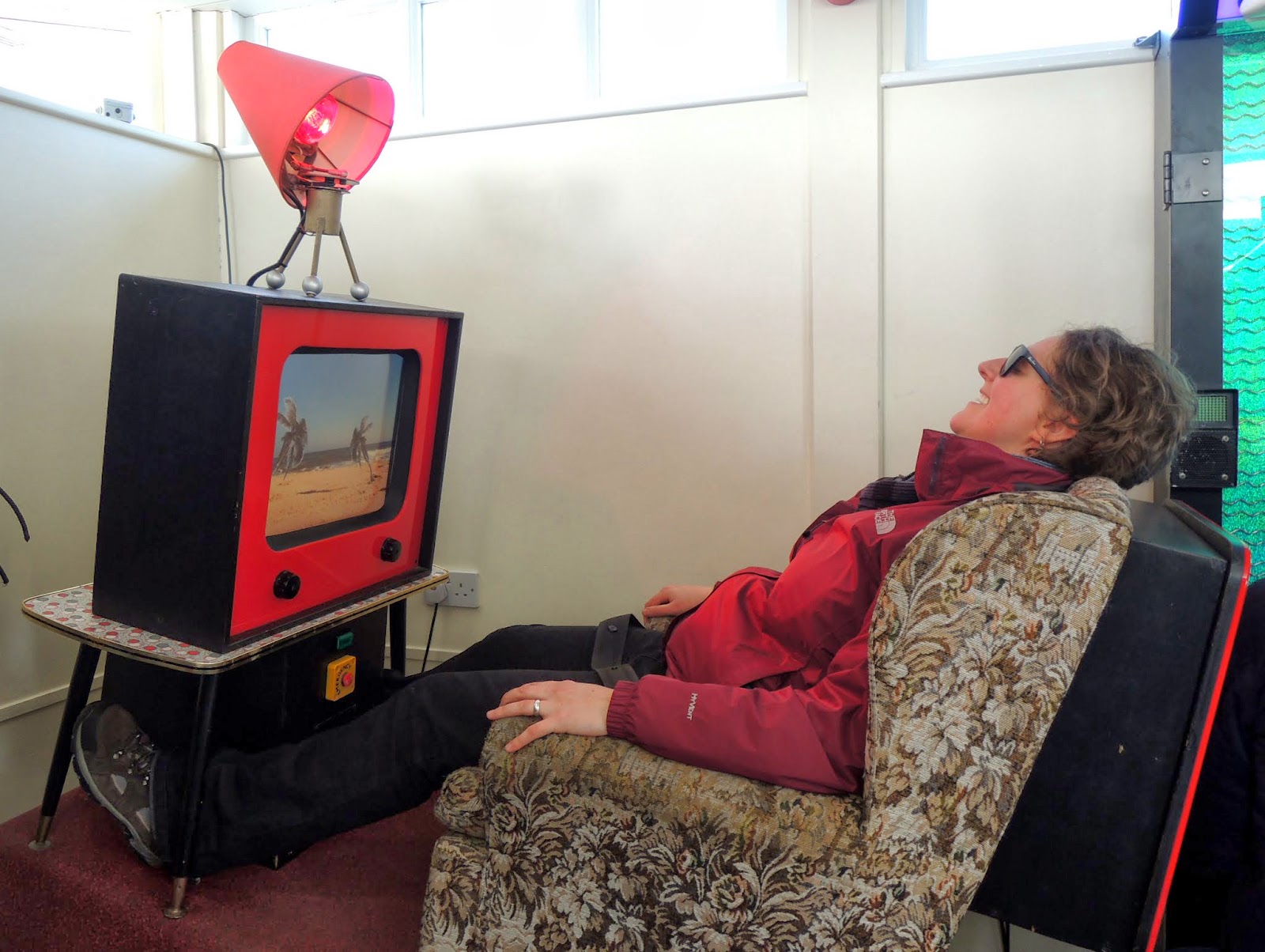 The Ewing won a billion pounds beating me at Pirate Practice and had her toes tickled and her heart listened to by the Chiropodist and the Doctor respectively, while I had my palm read in the Booth of Truth, was felt up by Autofrisk and enjoyed a condensed holiday, from the airport to the beach an back again in minutes, with Micro Break. 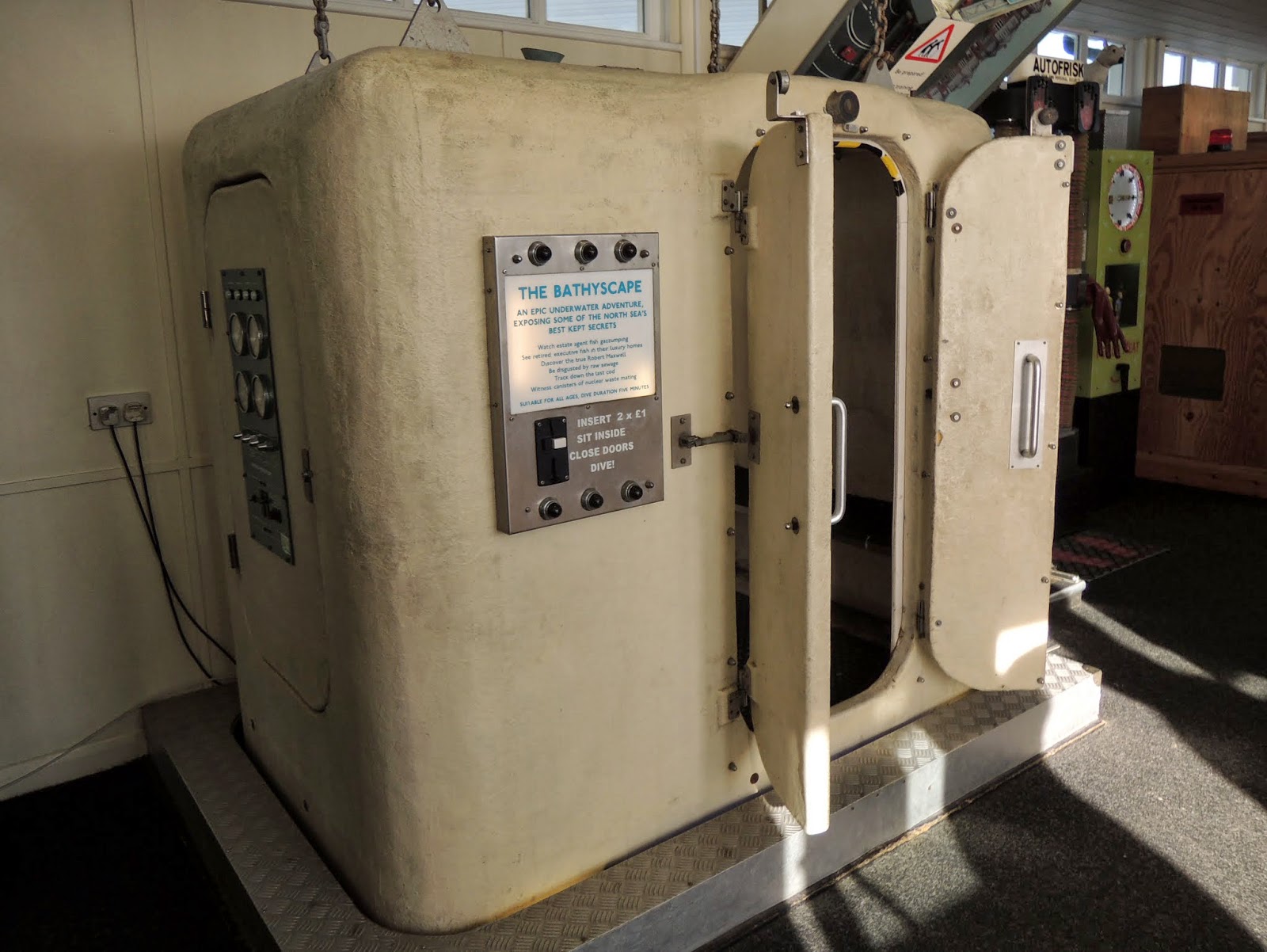 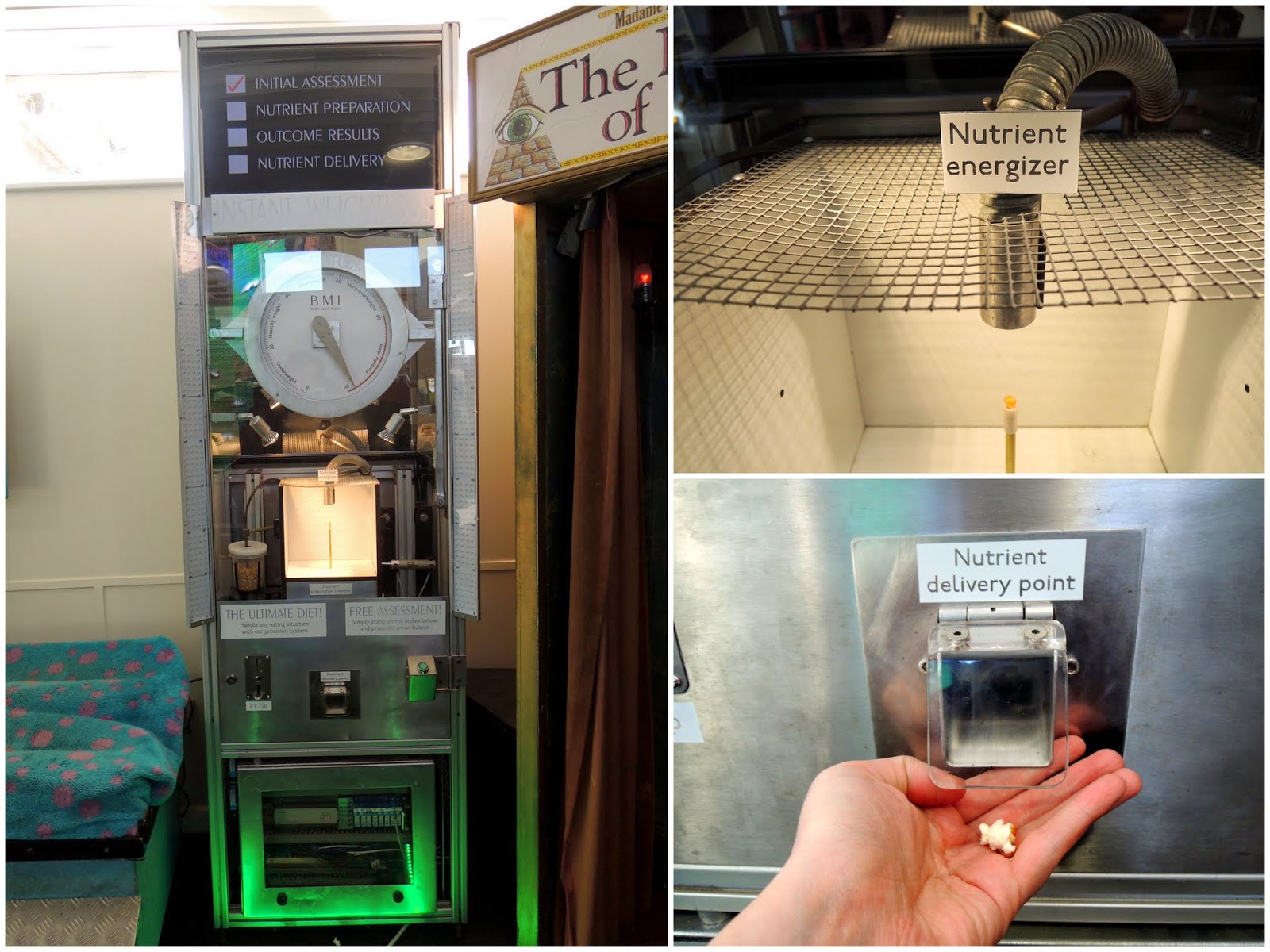 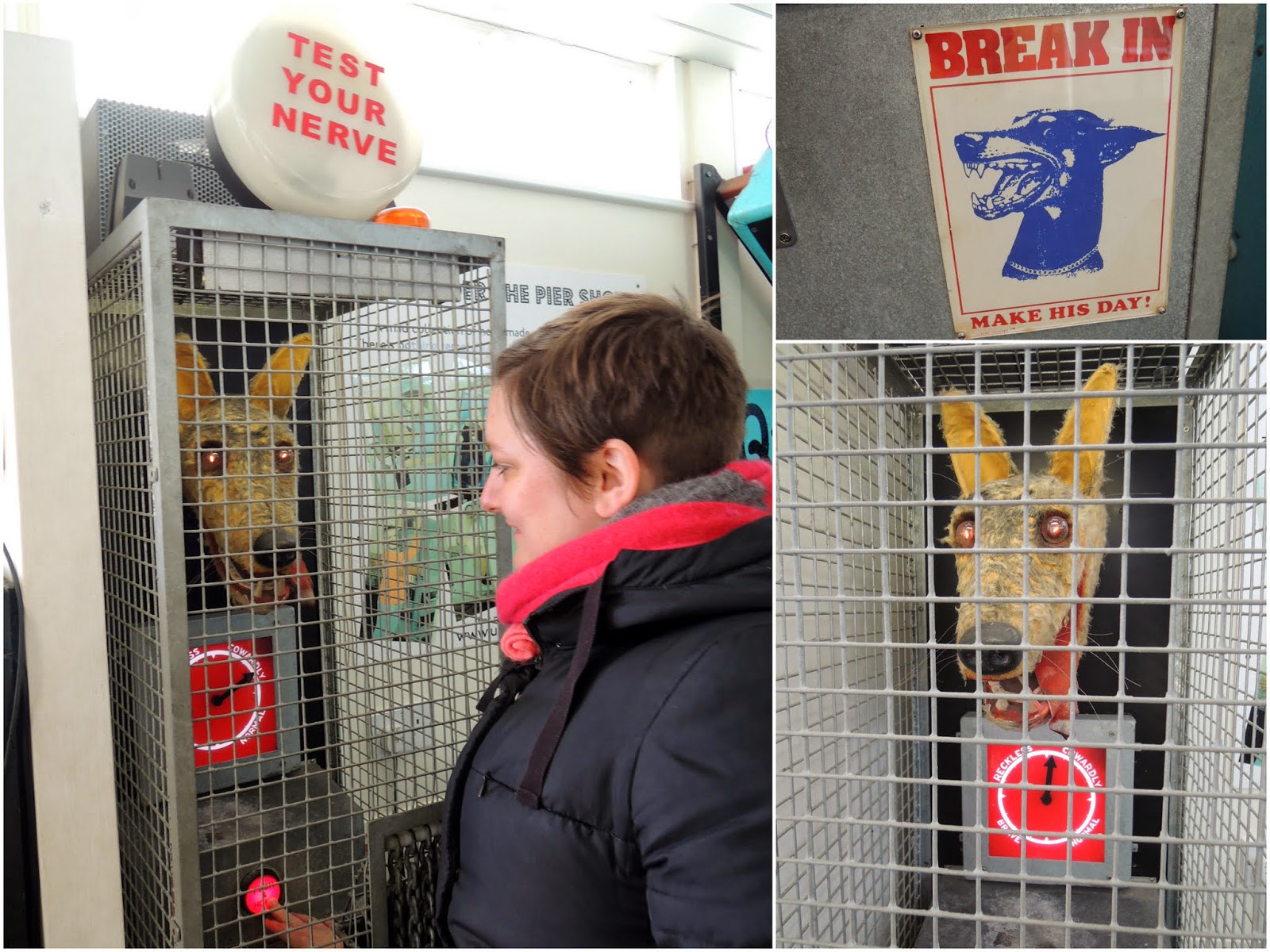 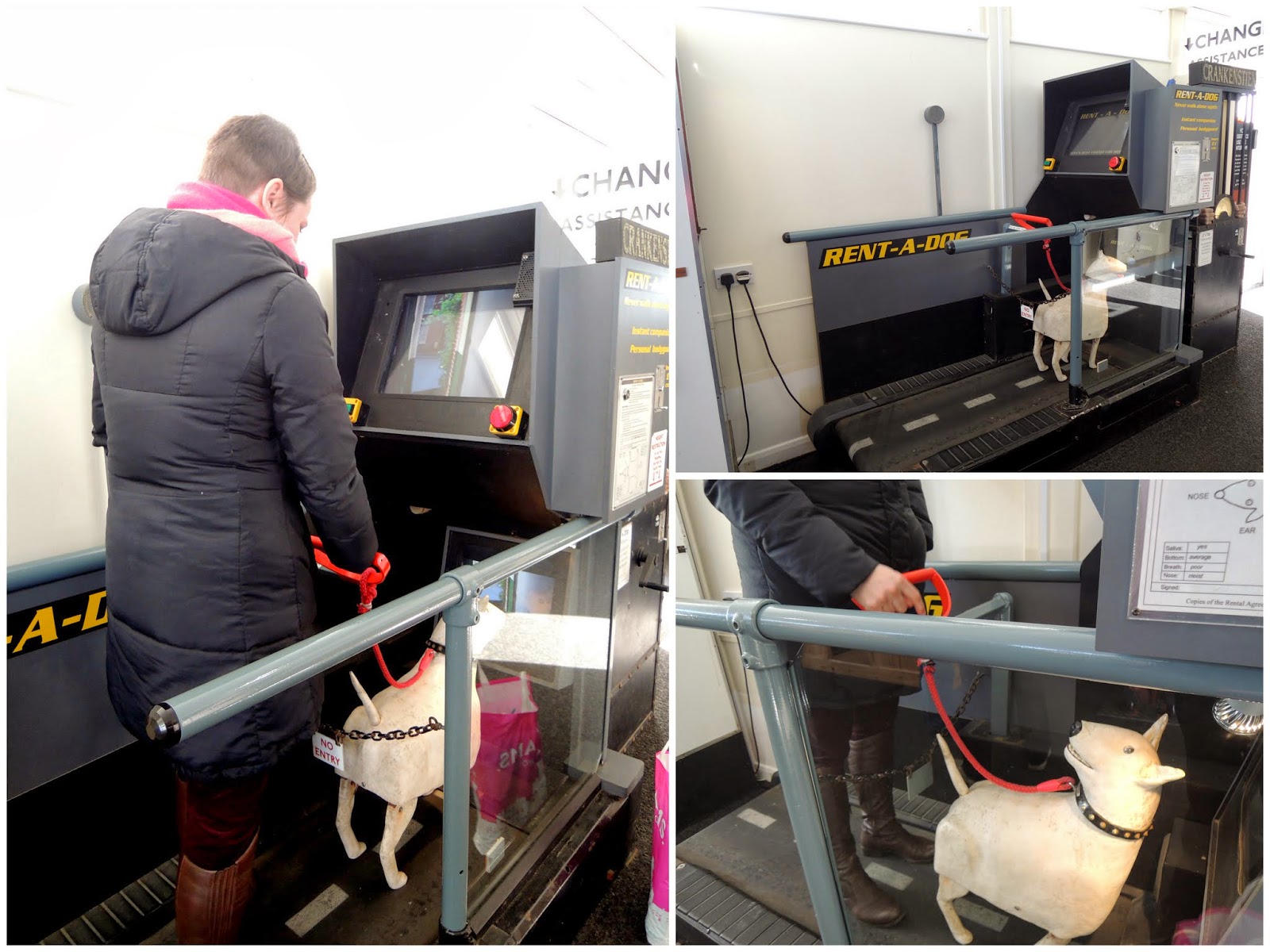 Then there is the Bathysphere 'an epic under seas adventure exposing some of the North Sea's best kept secrets' that include 'raw sewage, Robert Maxwell and mating nuclear waste'; an Instant Weightloss machine that weighs you to great fanfare (complete with flashing lights and sirens), before prescribing nutrients in the form of a single kernel of popcorn, freshly popped as you wait; and the Ewing's favourite Test Your Nerve, complete with dribbling dog, and Rent-A-Dog, where you get to take a borrowed pet for a stroll that's slightly out of the ordinary. 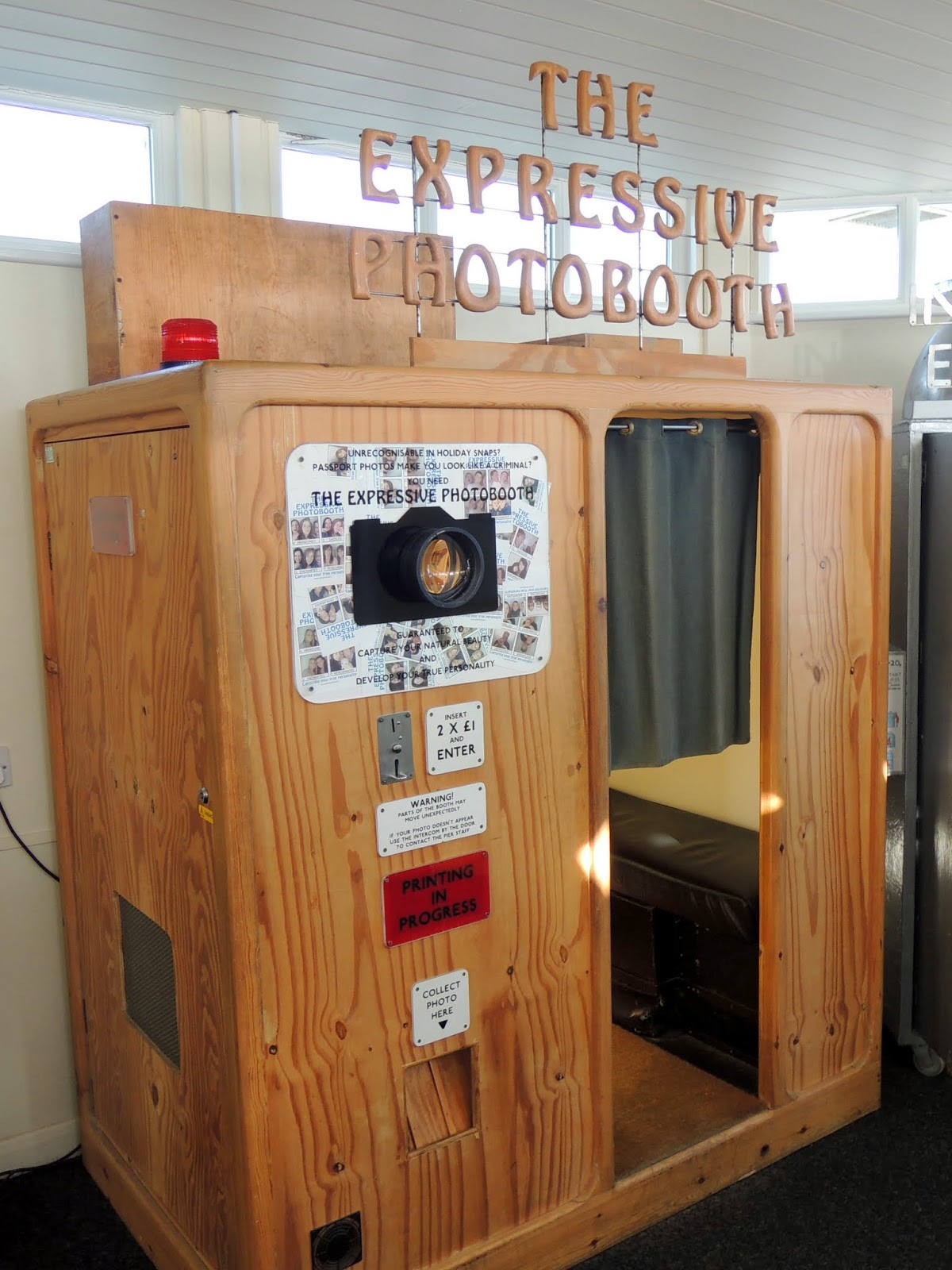 If you want a memento of your visit then be sure to try the Expressive Photobooth; a wobbly seat, lights and fans ensure the moment will be recorded for posterity, although I wouldn't recommend it for your passport photos... 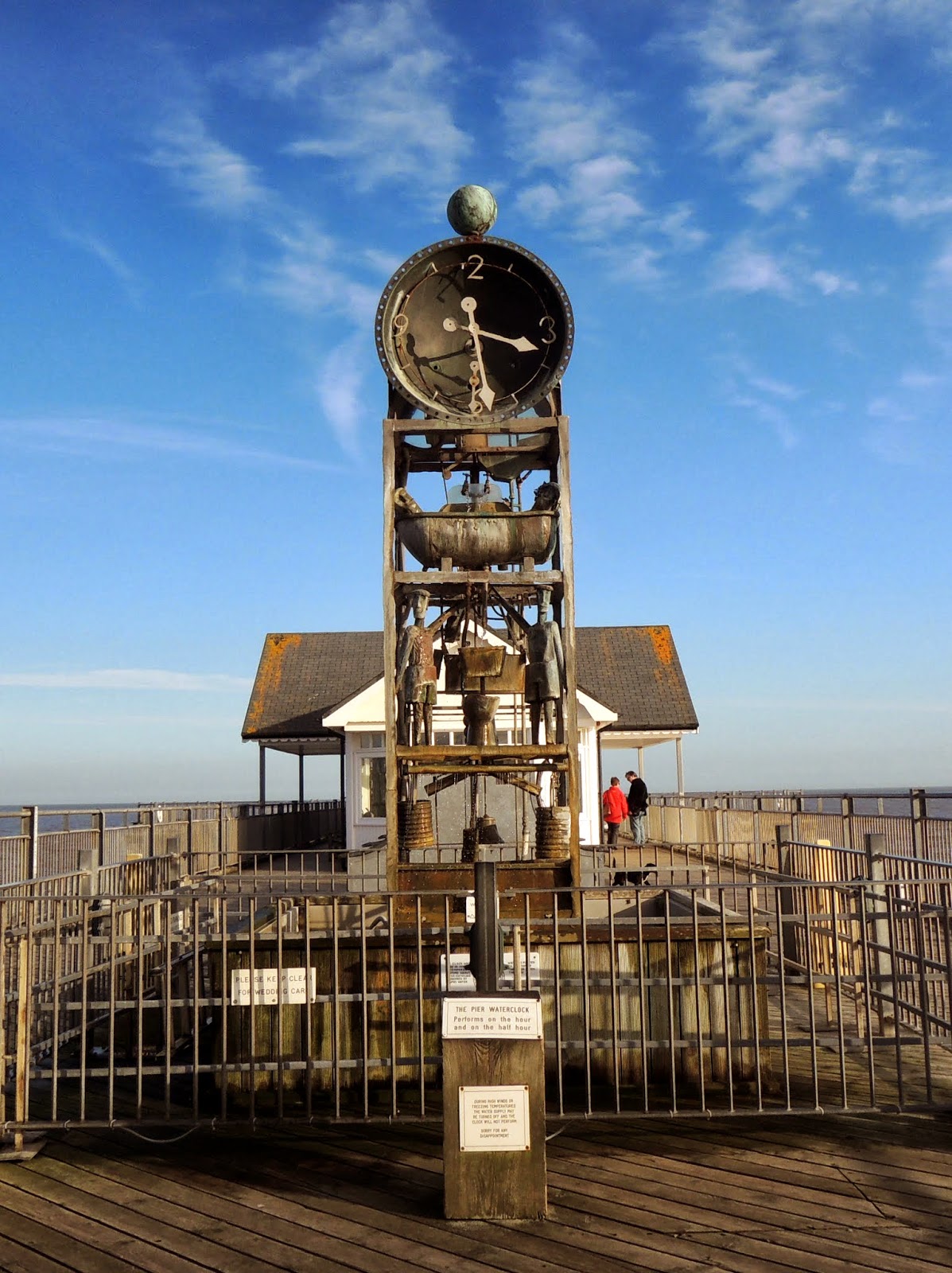 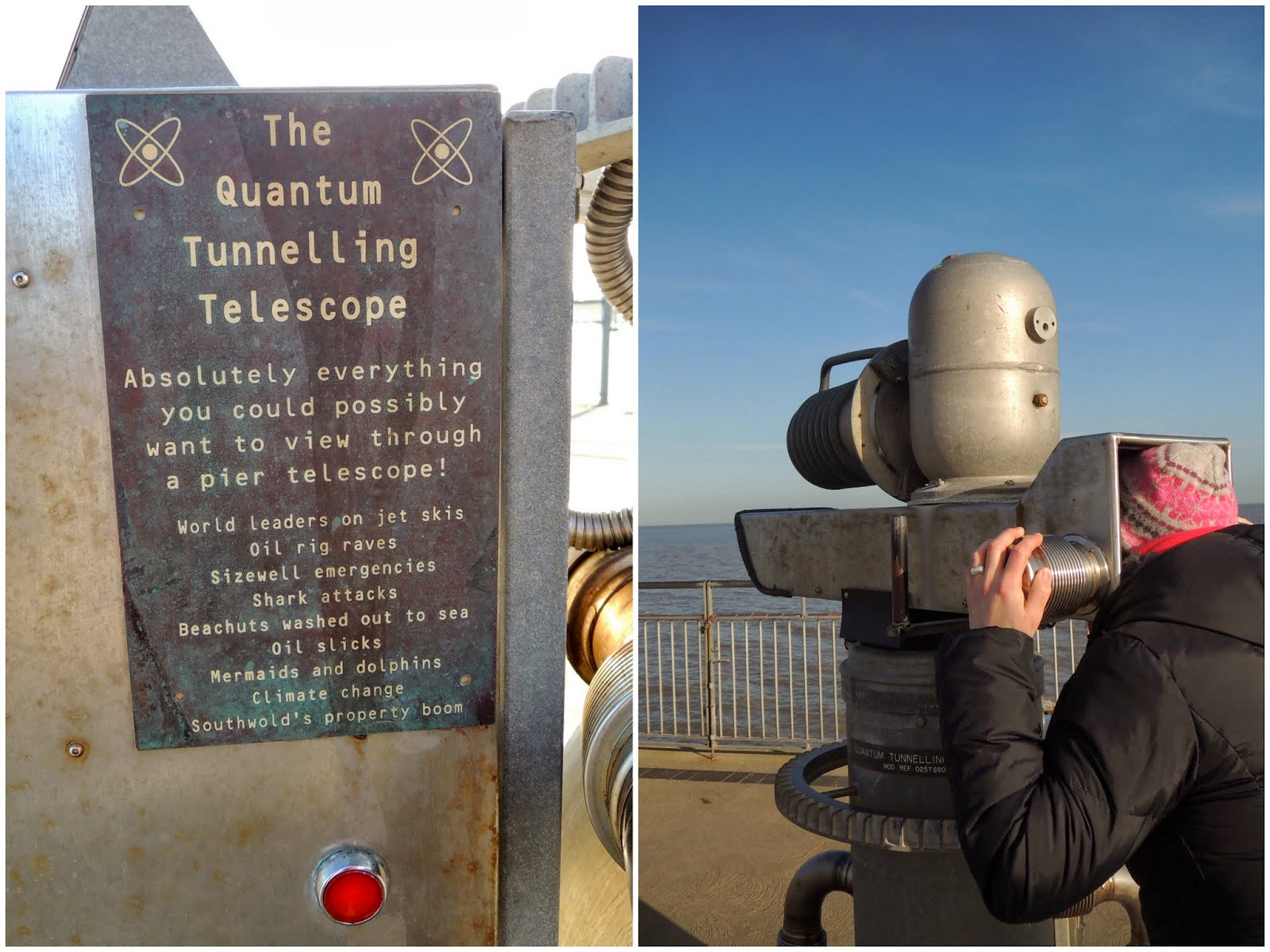 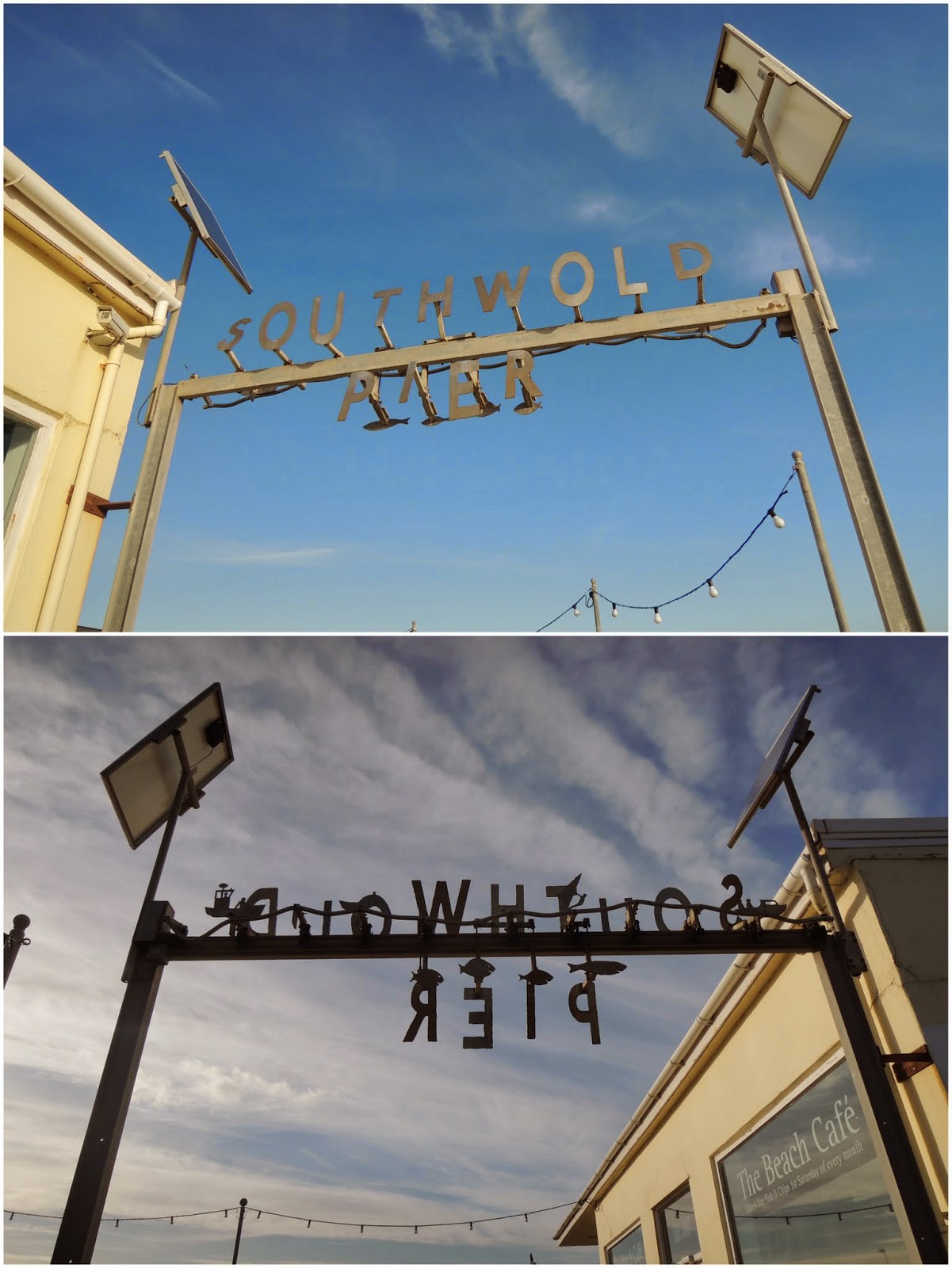 Huffkin's humour also extends to the pier's water clock, which features figures of both the artist and collaborator BLAH peeing on every half hour; and an end of the pier Quantum Tunnelling Telescope quite like any other you may have looked down before. A quintessentially British and quite fabulous experience. 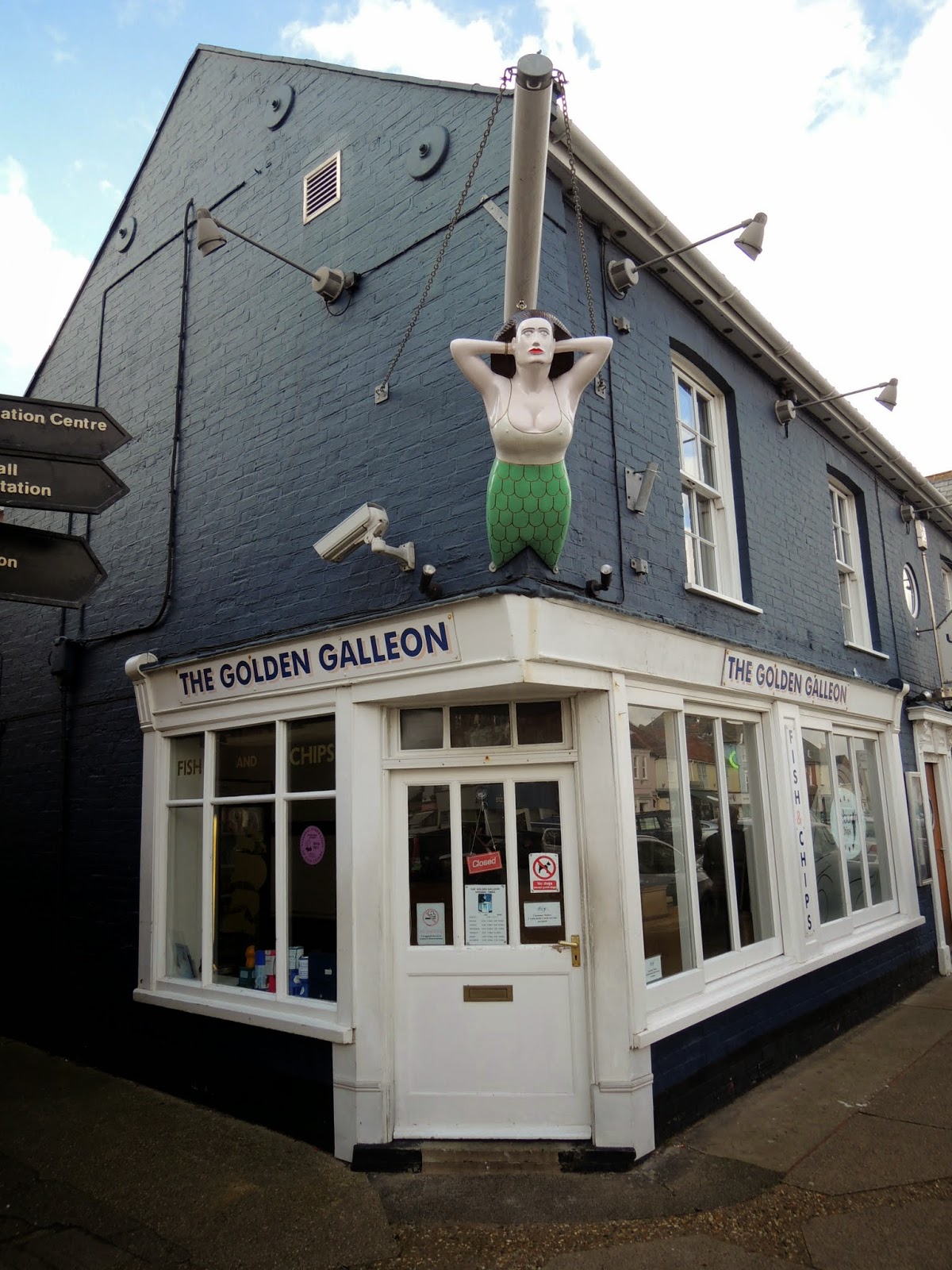 A couple of days later and we were lucky enough to visit Aldeburgh for a chance to sample Giles Coren’s favourite fish and chips, and as he described in the Times thus: ‘“It really was the best fish and chips in the world. Such dense, meaty fish, briney with the recent juices of the sea. Very light batter, dry with its own meatiness from the beef dripping in which it was fried, and a heady fish-meat vapour in the wafer-thin air gap between. Perfect English chips: firm, dry, almost crispy, hot, hot, hot with a ‘mouth-filling yomp’ of floury potato’

It’s sister gaff, the Aldeburgh Fish and chips shop, may be better known, but this place is purportedly just as good, and with less fearsome queues to contend with – like manhattans famous Shake Shack, they also have their own web cam to keep track of the queues. 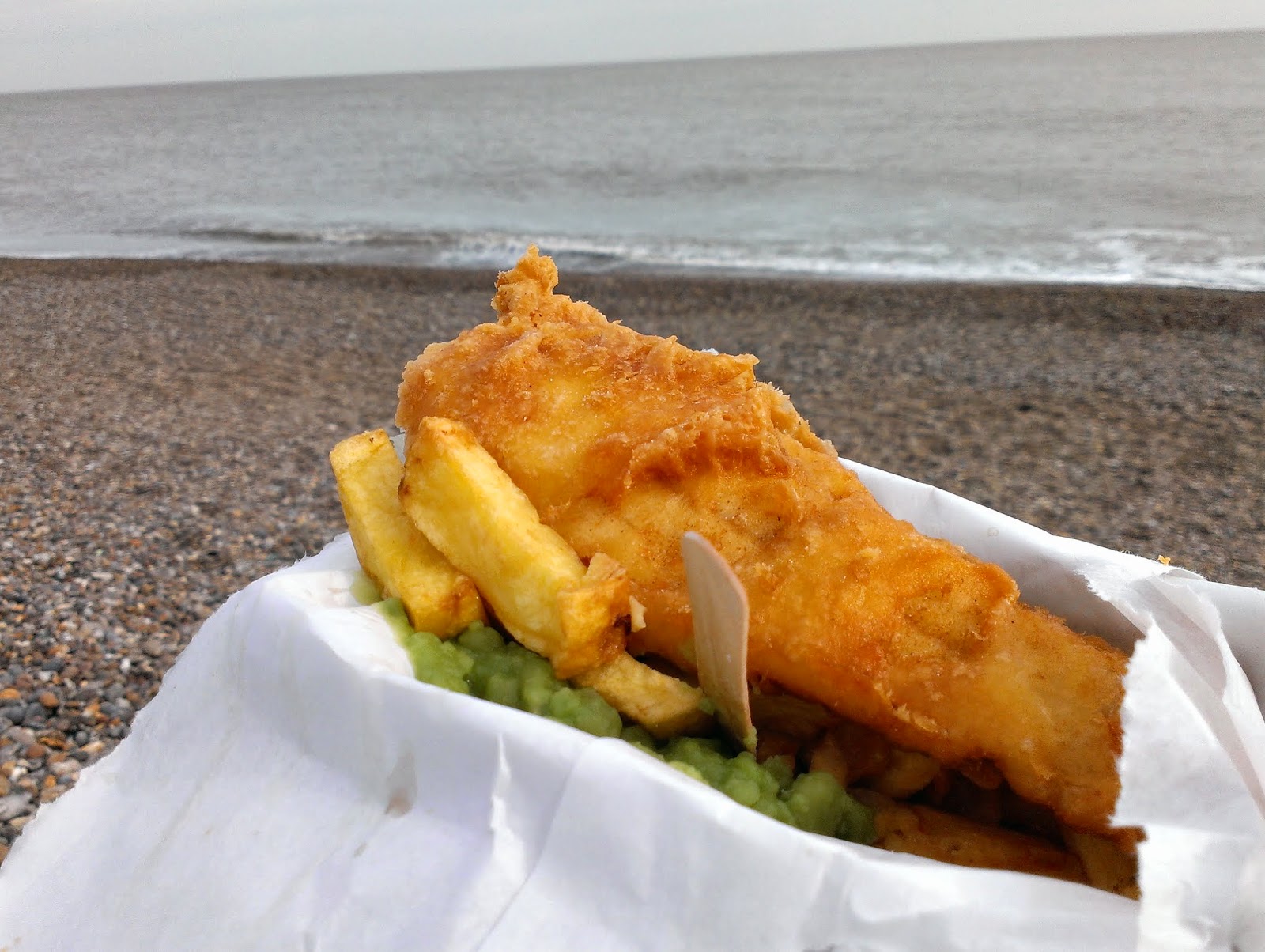 While the take away was rather quiet for a Friday lunchtime, the restaurant upstairs was already full, so we decided to brave the elements and take our haul onto the Suffolk shingle.

While the cod and chips were a few marks off those we had enjoyed in Southwold, the batter was crisp and the chips very fine. I also enjoyed the simple pleasures of a pot of flouro mushy peas for dipping and a can of bitter shandy to help it all down. 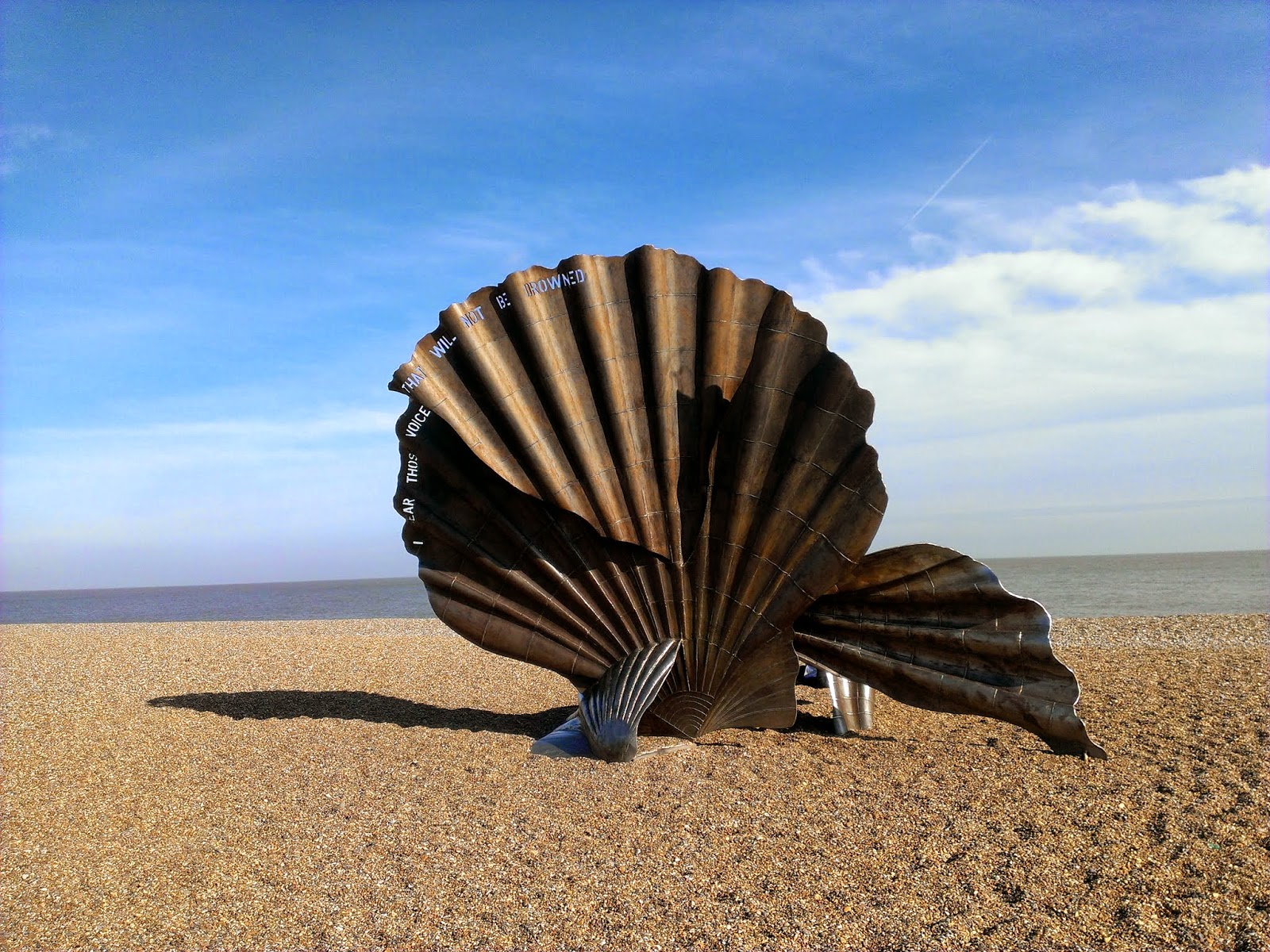 Even the seagulls are a better breed in this part of the world, keeping a respectful distance as we enjoyed our feast, and to crown things off the sun made an appearance as I speared the final chip, meaning we could enjoy a walk down the beach to see Maggie Hambling’s Scallop, a tribute to Benjamin Britten, Aldeburgh’s most famous resident. 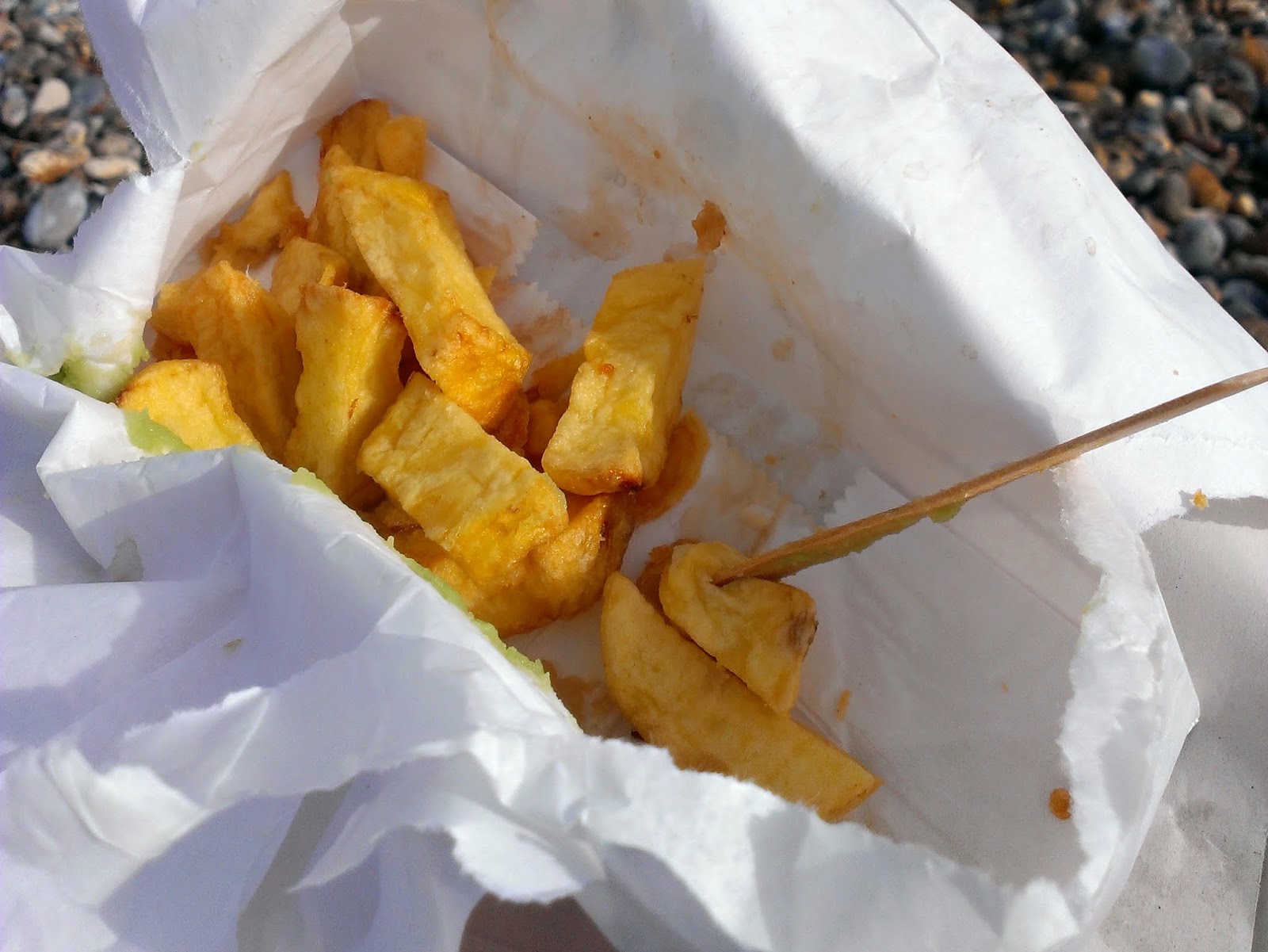 The the ideal end to the holiday, overlooking the swirling North Sea and feasting on a banquet of crisp cod and perfectly fried potatoes. There can be few things finer than enjoying the restorative panacea of a portion of cure-all fish and chips eaten on a Friday afternoon; a, quite rightly, veritable British institution and the perfect way to mark any occasion. 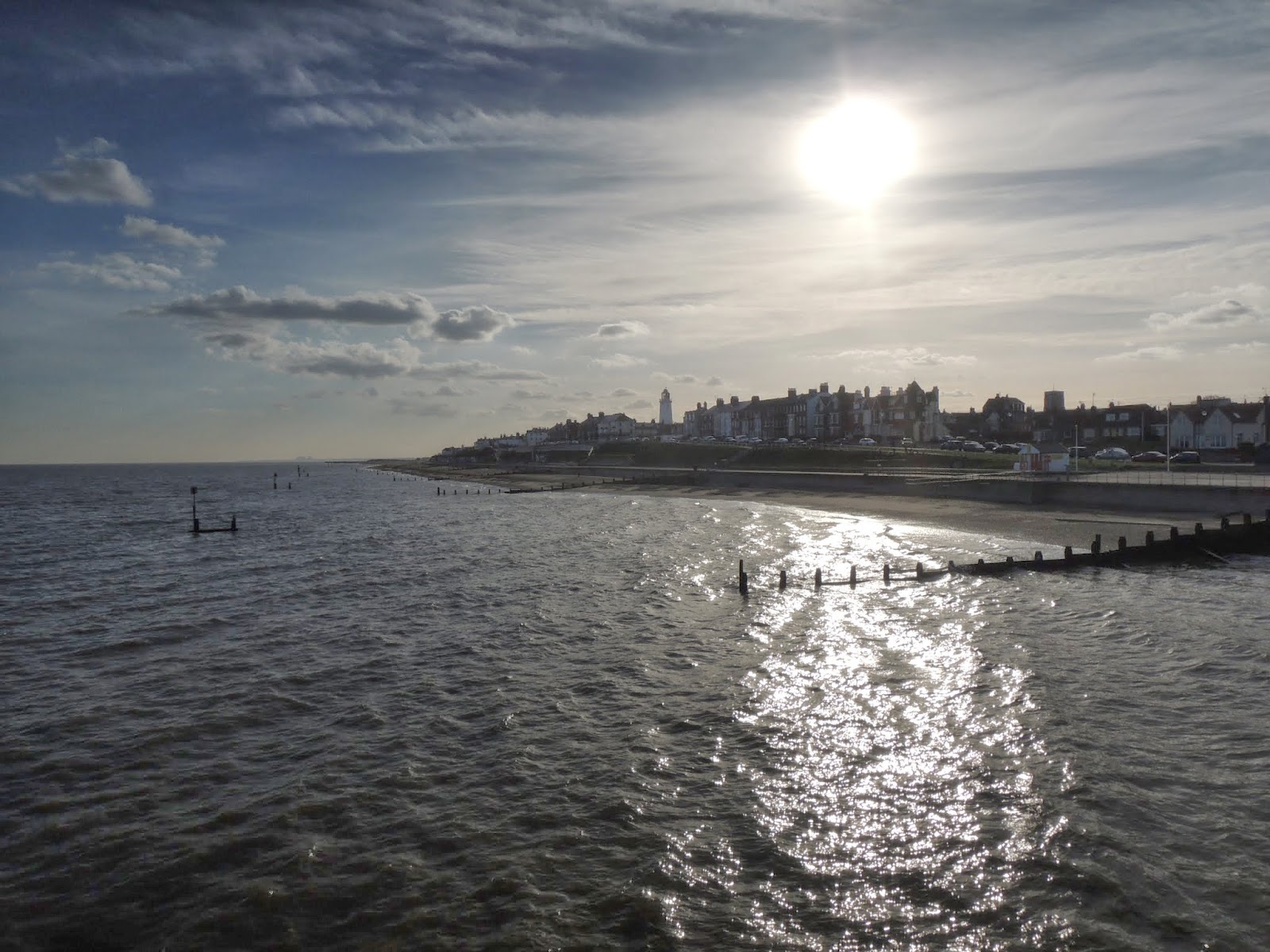