How Do You Like Them Apples? (and Some Buns) 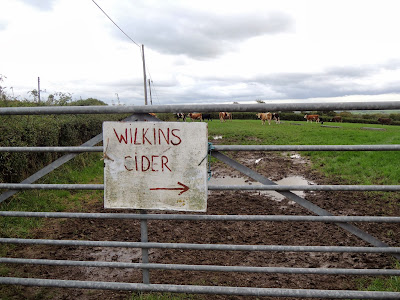 A visit to South West would surely not be complete without sampling some cider and the self-professed ‘home of Somerset cider’ is Roger Wilkins Farm, in deepest, darkest Somerset.

This place, accessed down a tiny dirt road that winds away to nothing - you’ll know when your there as a tractor with its trailer full of pressed apple pulp ready for feeing the cows blocks your path – has become somewhat of a cult stop on the cider trail. So much so that a couple of guys - purportedly Banksy and a cohort- arrived one afternoon to paint a mural to the great man himself on the back of the shed wall. 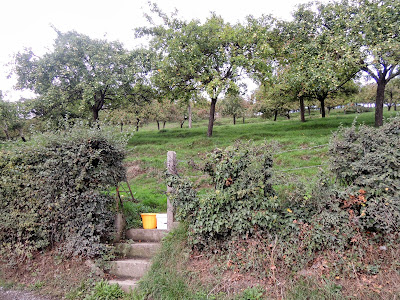 To say this is a ramshackle outfit would be quite the understatement; this little corner of England remains gloriously, perfectly untouched by modern methods or concerns for health and safety. The apples, grown in the orchards adjacent to the farm, are bought to the shed in sacks, loaded onto a chute, crushed and then pressed before the resultant juice is syphoned off in to a holding tank that stands open at the corner of the room. From there it is tasted by Roger, sugar added to the ‘sweet’ batch, if needed, then allowed to sit and ferment in the same wooden barrels that have stood here for as long as anyone cares to remember. 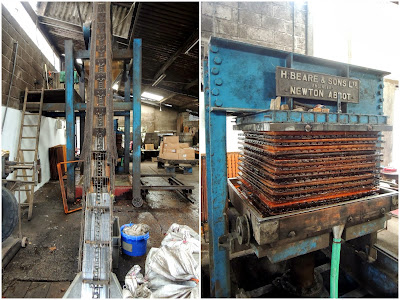 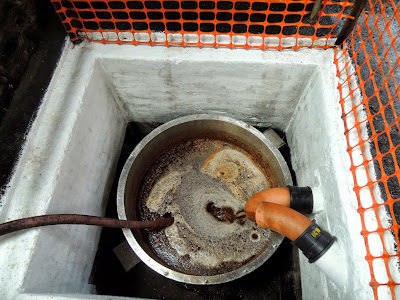 On arriving on Friday afternoon we could already hear the thick West Country babble emanating deep from the bowels of the shed, and poking her head around the corner, the Ewing was faced with a trio of Somersetians well on the way to kicking off the weekend. 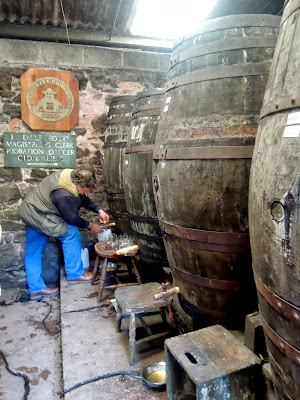 The least verbose of the three, a man who made BLAH got up, tab still lit in the corner of his mouth and offered to pour us glasses of cider to try – sweet, dry and medium ( a mix of the both and my favourite). This is the real deal, unfiltered unadulterated, magical stuff. While it packs a bit of a punch, at roughly 6.5% (depending on the sugar content of the apples) Roger himself has been drinking the stuff daily, up to 20 pints in his younger days, and has, reportedly, yet to have a hangover. 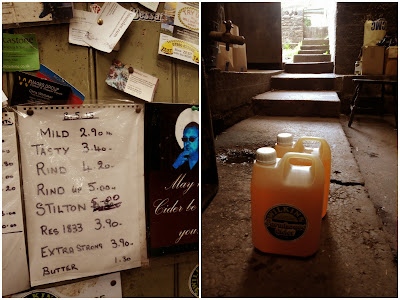 We decided to take a gallon of each back to the hotel with us, and buoyed on at our success in securing some cider, the Ewing moved on to press hime about the cheese that we had heard was sold on the farm, too. After being directed to a sign taped to the wall listing all the varieties available - there was no ‘rind’ available on our visit, but since we couldn't work out what it was, we were happy to go without - the Ewing managed to wheedle that the extra mature was the farmer’s choice. Sensing that further conversation was going to be in limited supply, we settled on a pound of the extra mature and a pound of the Stilton, which he confided Roger had ordered in in big truckles and cut down to size. 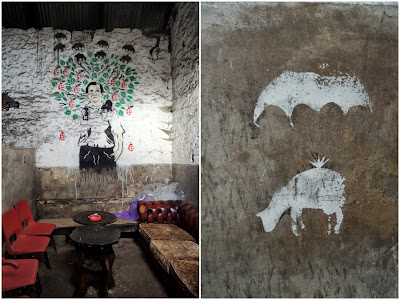 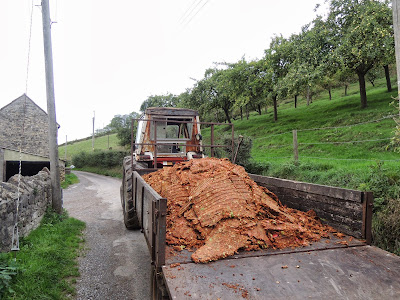 The visit ended rather surreally, with the Ewing in the next door ‘lounge’- decked out complete with Frankie Howerd’s old leather chesterfield - talking to a couple who first heard of the place when one of them was a DJ in the Bristol area. I, meanwhile was sat in the ‘bar’ area, self-consciously supping my drink and wishing I was as drunk as my new companions. We even had the pleasure of chatting to Roger himself, a gregarious man, with a twinkle in his eye and pint of his very own cider in hand. 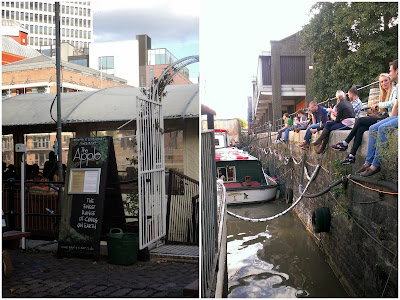 As promised by Roger, the next morning dawned bright and hangover free, but things weren't going to stay that way for too long. After our lunch and bottle of vino tinto at Bell’s Diner, we spent the afternoon by Bristol’s canal, supping yet more cider. This time the venue was the Apple, a barge moored at Welsh Back with a bar down below and seating areas area up on deck and out on the quayside. 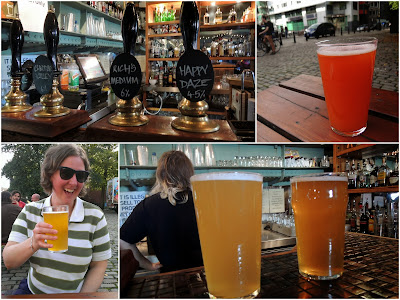 Cider, naturally, is the focus, with over 40 types offered. Best of all they have a range of local drops on pump, including Wilkin’s, Cheddar Valley, Happy Daze, and their very own Old Bristolian.  You can even branch out with a cider cocktail or a ‘Bristol Pimms’.

My favourite of the four types sampled was the Happy Daze, a deceptively smooth Welsh cider, at a moderate 4.5%, although the Sheppy wasn’t bad either. Most polarizing was the pint of Cheddar Valley the Ewing was drinking. With its hue the colour of nuclear waste, this opaque orange number, with its rather hefty 6.5% kick, was blamed for most ill in the world – and some of us were very ill - come the following morning. 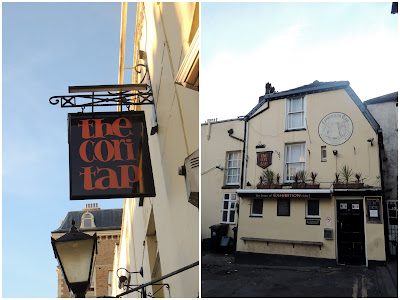 Our swift cider tour was finished off with a swift Sunday half (it’s too potent to be served in pints) of the Exhibition cider at Clifton’s Coronation Tap. This place doesn't open until 7 on Sunday evenings, but was already packed by five past when we arrived. 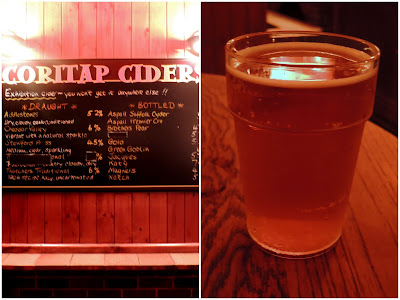 The Ewing was sworn off the cider after her escapades the day before, and stuck to a Bath Gem, but I enjoyed a drop of the house special. Only served at the Cori, the smooth flavour belied the alcoholic punch, although the plastic glasses its served in suggest that first impressions can be deceptive.  There are also barrels of all familiar favourites behind the bar, and the Exhibition is available in takeaway cartons. 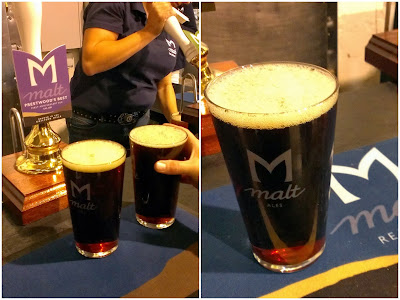 A bit closer to home, and with the focus switched from fruit to grain, we recently attended the Malt Brewery’s first anniversary open day. As the brewery is sited at Collings Hanger Farm - home of Wren Davis, an ex-dairy producer who also raise pigs and keep fruit orchards - it also provided a chance to celebrate Apple Day.

The beer, as ever, was great, especially their Prestwood’s Best, a special anniversary ale brewed for the occasion There was also a chance to sample the burgers and sausages, made with Malt Ale, from the Seasons Farm Shop in North Dean. The bbq keep stoically ablaze through the thunderstorm that broke over our heads. 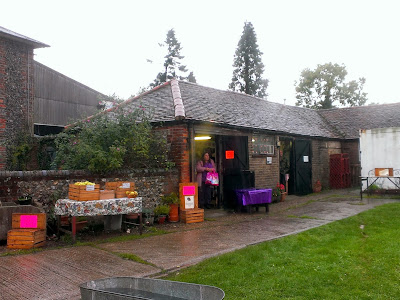 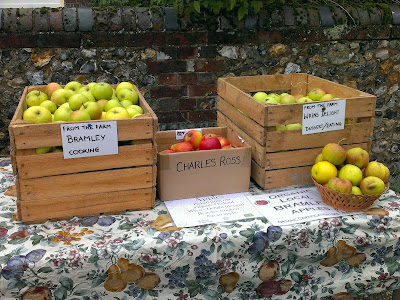 The apples we picked up from here came from far closer to home, the apple orchards at the back of the farm to be precise. Rather aptly for the home of Wren Davis – I’m not sure if it was engineering or fate – the eating apples on sale were the Wren variety. There were also Charles Ross and good old organic Bramleys, perfect for puds and pies. 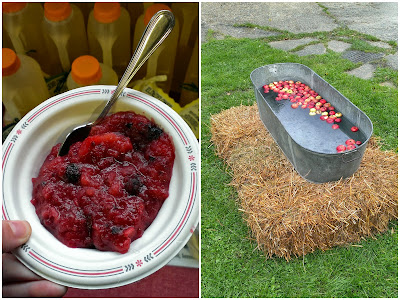 The Bramleys had also been made use of in creating some cakes and deserts that were being sold, alongside home reared Kelly Bronze turkey rolls, homemade elderflower cordial and freshly pressed apple juice – from one of the farm buildings. The Ewing enjoyed her apple sauce cake, and my simple stewed apples and blackberries were nothing less than a triumph (even if I was hankering after a slick of cream or custard alongside). 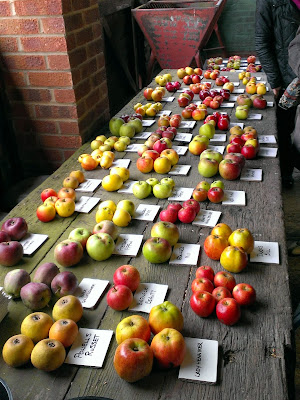 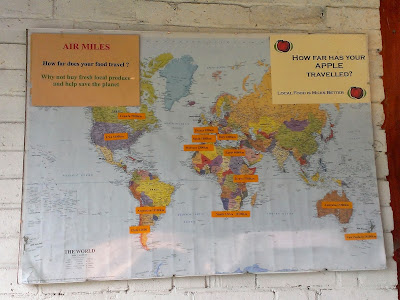 There are many different types of apple grown in the orchards, and examples of each were bought up to show in one of the barns. This is local food at its best; full tables laden with the most beautifully coloured and fantastically named fruits. Why anyone would choose to eat a Golden Delicious, Jazz or a Pink Lady when you could enjoy a Foxwhelp, Bloody Ploughman, Lord Lambourne or Razor Russet instead remains a mystery to me.

As well as having far better names, the apples themselves are also far nicer. None of the sickly sweet fruit with a cotton-wool texture and waxy skin, but instead a decent crunch and distinctive flavours, ranging from pears, to raspberries, to roasted nuts, to ‘proper’ apple. There was even a poster on the wall displaying how far the apples you pick up in the supermarket may have travelled. 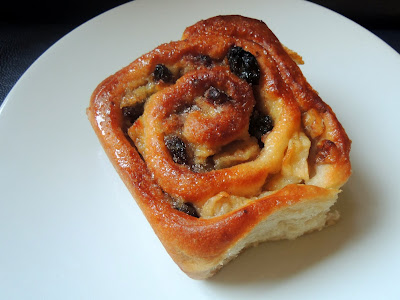 After manoeuvring the car out of a boggy field and safely getting our glut back home, the Ewing found her new found love of bread making to try out a recipe for ‘Apply Chelsea Buns’ from Hugh F-W’s new Fruit book. 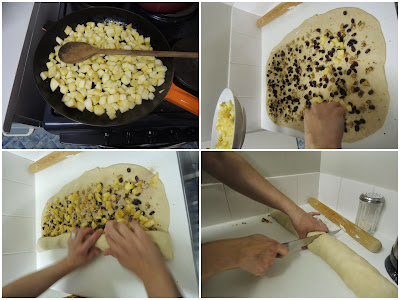 Surprisingly simple to make, and an astounding success, these magnificent scrolls, stuffed full of roasted orchard fruit, raisins, butter and nuts, are British baking at its finest; I’m already eagerly awaiting the next batch. 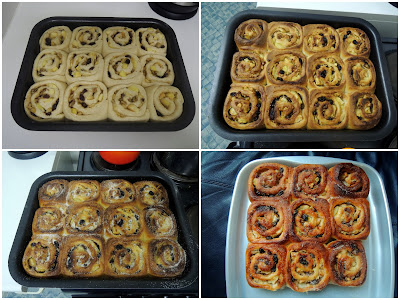 Combine the warm milk, yeast and sugar, whisk and leave for about 15 minutes, until the mixture is frothy.
Combine the flour and salt in a bowl. Add the yeasty mixture, melted butter and egg, and mix to a rough dough. Turn out on to a lightly floured surface and knead until smooth and silky – about 10 minutes.
Put the dough in a clean, lightly oiled bowl, cover with clingfilm and leave until doubled in size (2-3 hours).
Grease a deep rectangular baking tin (25cm x 30cm) with butter. Heat 25g of the butter for the filling in a large frying pan, Add the apple and cook for about eight to 10 minutes, until softened. Leave to cool.
Tip the risen dough on to a floured surface and roll out to a 45cm x 30cm rectangle, with one of the longer sides towards you. Brush the remaining melted butter over the dough, leaving a 2cm margin at one of the longer edges. Scatter over the apple, raisins and walnuts, then combine the sugar and cinnamon, and scatter on top.
Roll up the dough, starting at the long edge closest to you, enclosing the filling in a long, swiss roll-style sausage. Trim off the ends, so you have a neat roll, and cut into 12 equal pieces'
Turn each piece on its side, arrange in three rows of four in the tin, then put the tin inside a clean plastic bag and leave to prove in a warm place for a good hour, until nicely puffed up. Meanwhile, heat the oven to 200C.
Bake for 25-30 minutes, until deep golden brown
Melt the butter for the topping in a small pan and brush over the buns while still hot. Sprinkle with a further handful of sugar to finish and leave to cool before eating.