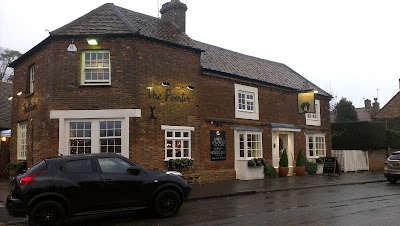 And so it's finally over for another year. The only reminders of the end of another festive season being a few dead pine needles stuck in the carpet, the empty box of Rennies by the bedside table, and a belt that's been let out another notch. For those who haven't completely foregone the Good Life for meal replacement shakes and morning runs (or those that have, but who still want to taunt themselves with glorious pictures of solid food) here are a few words about the rather marvellous Pointer in Brill. 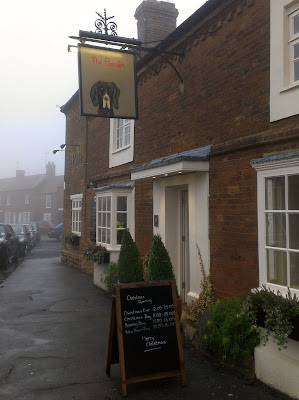 The Ewing and I visited the Saturday before Christmas, en route to buy Christmas beer from the XT Brewey in Long Crendon. After going to panto the night before, and waking up to smoked salmon on rye and Monmouth coffee in bed, our holidays were already getting off to a great start, and I was looking forward to my lunch at a 'proper' pub in a 'proper' village - Midsommer Murders is often filmed around these parts, and there does seem to be a timeless 'Olde England' sort of feel in the air - which was made all the more charmingly mysterious by the gently swirling mist that was quickly descending as we drove to our lunch date.

It's a fine looking establishment that has been lovingly and painstakingly restored - parts of the building date back to Agincourt - and on nicer days than that of our visit there is also a lovely garden to sit and sup your pint. Topically it is also often said that Tolkein based the village of Bree in The Lord of the Rings on Brill, after visiting the village when he was at Oxford. Sadly, we didn't see any Hobbits on our visit; although with the winter fog it was pretty hard to see much at all. 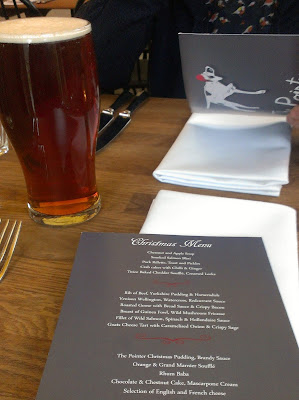 To drink we sampled a pint of the Pointer Ale, brewed especially for the pub by the aforementioned XT Brewery, sited a few miles up the road. An agreement between the pub and the brewery sees any leftover grains and yeast from the brewing process being used to feed the Longhorn cattle that end up on the restaurant menu (and being sold at the butcher's next door). 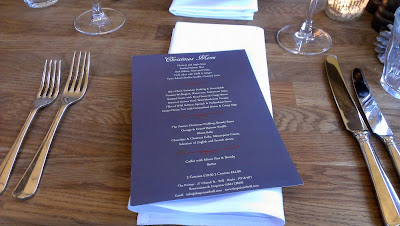 They were offering their Christmas Menu on the day of our visit (two courses for £19.50, three for £24). While that might make many a heart sink, The Ewing and I had both missed our festive work parties and had been looking at the rather sad prospect of only having one Christmas dinner this year, so we were more than happy to get a dummy run in before the big day. 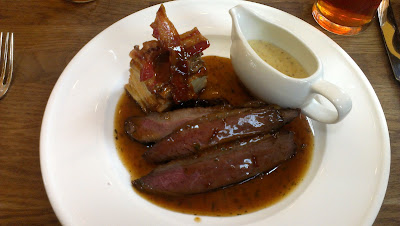 Anticipating the forthcoming eating onslaught that is four days at my Mum's, we skipped starters and jumped straight onto the mains; in my case the roast goose, red cabbage, bacon and bread sauce.

I like goose, it always sounds so festive and looks so magnificent, but it also often struggles to reach my lofty expectations. On the occasions we've had it for Christmas I always find myself strangely missing the good old bacon-wrapped bronze turkey, and it leaves you with far less leftovers for sandwiches on Boxing Day. Great fat, though, for frying up the bubble and squeak. 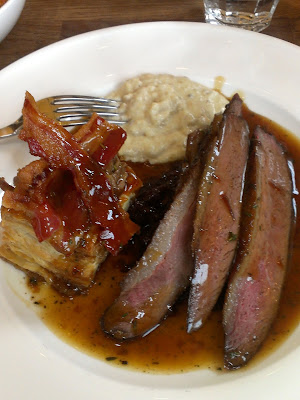 This way I got to enjoy my goose without missing out on my turkey and sprouts for Christmas Dinner. (Yes, I am serious. Turkey, sprouts and Christmas pudding may be a triumvirate of doom for many, but I love them all dearly.)

The breast was delicious; a little pink and slightly gamey. It came with a little vol-au-vent pastry case filled with shredded confit leg meat and topped with a cross hatch of crispy bacon. Bread sauce and gravy, mainstays of a good bird-based roast, were spot on. 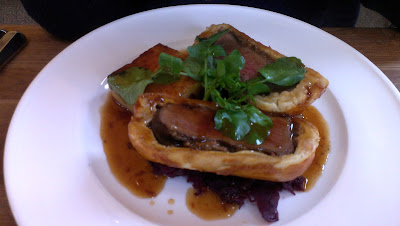 The Ewing's venison wellington with red cabbage and watercress. Again this was a piece of very good cooking. The meat was pink and tender, the pastry crisp, and a layer of rich pate between the meat and the buttery carapace set things off nicely. If all that wasn't quite enough,  it also came with a fantastically cheesy helping of gratin daupinois. 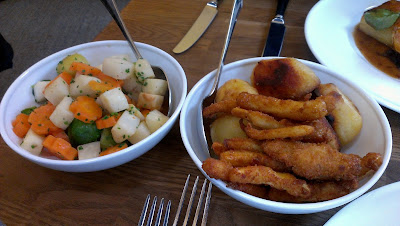 Sides included a large dish of excellent roasties and crispy bread-crumbed parsnip batons, which were a favourite of the Ewing's. It wouldn't be Christmas without brussels; these were, alongside the, rather more prosiac, swede and carrots, cooked perfectly. No sprout sludge here. 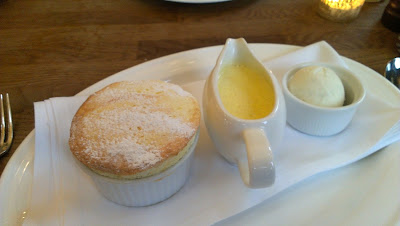 For desert I chose the Grand Marnier and orange souffle with custard and cream. A souffle - when well risen, as this was - is truly a wonderful thing, but I can't help but feel they often look far better than they actually taste. This was no different; while not bad by any means, I found it too sweet, without the punch of the advertised Grand Marnier.

While I normally approve of the belt and braces approach, I'm not sure the souffle really needed either addition served alongside, although that didn't stop me spooning the (very good) custard straight from the jug and into my mouth. 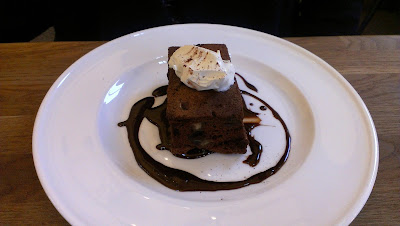 The Ewing's chestnut and chocolate cake with marscapone was less like the truffle-type torte I was expecting, more like a brownie with chestnuts replacing the more familiar addition of walnut/pecans. The cake was rich and still gooey in the middle, just how it should be, but the chestnuts were a little mealy and dry in texture.. The marscapone was also in rather short supply, with some extra lubrication being provided by the scoop of my superfluous ice cream. 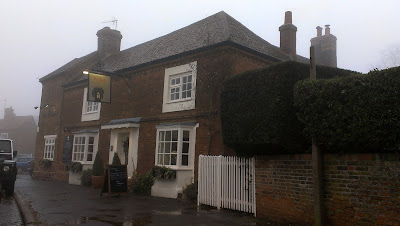 Our meal, to match the staff and surroundings, was impeccable, but after two gargantuan courses even the Ewing couldn't manage any of the mince pies and coffee she had eagerly been anticipating at the start of our meal.

Probably just as well, for despite arriving promptly at 12.30, just as they started serving lunch, we had already been there for a good couple of hours. While the service was charming and laid-back it was all maybe a little too relaxed. Lovely if you're not in a rush, but still a rather long time just to be served a main and pud. But, I guess we're in the country now, and good things certainly come to those who wait....