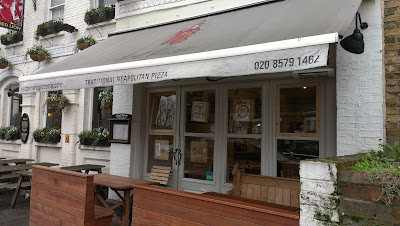 I heart the Ewing; not only does she patiently pick up socks, wash up pots and generally clear a path through my mess so I can still find a way to the sofa, but she's also become very accepting of my random requests. I also heart pizza and after waking up early one Sunday a few weeks ago and announcing that I had a craving that only driving over to Ealing for a Neapolitan pie would fix, she merely briefly opened her eyes and grunted in agreement, before turning over for another half an hour's kip.

Now, she could have politely and reasonably suggested that there were many nearer and more convenient places to pick up a pizza - at least seven or eight places well within walking distance of our house - but, luckily, she now knows better than to question any crazy ideas when they pertain to my lunch. And while yes, I could have had my pick of the local joints, with their Hawaiian deep dishes and generic chain pies, my cravings for a decent post Christmas pizza meant they were just not going to cut it. 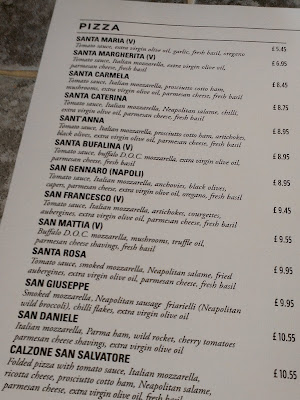 And so it came to be that we were hanging around on a misty Ealing Broadway waiting for Santa Maria to open at Midday - For anyone with time to kill, the Red Lion pub next door is well worth a visit. Sited opposite the Ealing Studios it became known as Stage Six during the heyday of the famous comedies and was frequented by the likes of Alec Guinness, Sid James and Peter Sellers. Inside there are posters and film stills adorning the walls, as well as a decent pint of Fullers ale to be had from the bar.

And so back to the Pizza. This tiny Neapolitan style joint was voted London's best pizza by Time Out in 2010, and still regularly crops up in all the best of London's pizza lists. Despite it's huge popularity it's only a tiny place (although they have recently opened a second branch, Sacro Cuore, in Kensal Rise), and I didn't want to miss out nabbing one of the half dozen tables. 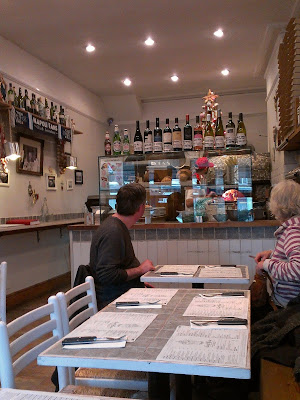 Luckily there was no one in West London feeling quite as mad as I was that morning, and we made it first through the doors. The wood fired oven was already cheerfully blazing away, and it wasn't long before we had a glass of the house red and a cold bottle of Peroni in hand, helping make the choice of which toppings to pick that little bit easier. 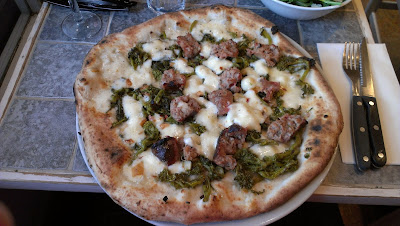 In truth I didn't need much helping, quickly plumping for the San Giuseppe which comes topped with smoked mozzarella, Neapolitan sausage, friarielli (wild broccoli) and chilli flakes. This was truly a triumph. The bitter greens had been softened in olive oil and strewn between chunks of peppery pork and smoky mozzarella, before being fired in the oven for just long enough to char the crust and melt the cheese into milky pools. The cornicione was puffy, slightly scorched and crisp while the middle was good and chewy. The perfect balance.

There was really nothing more I could have asked for in a pizza, other than a second one to takeaway and eat cold for breakfast the next morning. 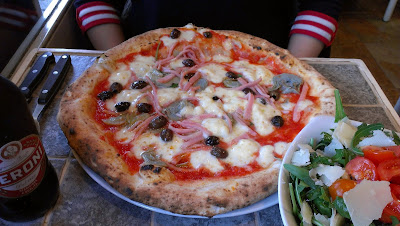 The Ewing chose the Sant'Anna, with Tomato sauce, Italian mozzarella, prosciutto cotto, artichokes and black olives; a good combination of flavours with tiny bitter olives and sweet mozzarella, but the ham came as pink matchsticks and the artichokes were a rather alarming hue. The real problem was the choice of toppings, combined with the Marzano tomato sauce and rapid cooking time made for a crispy outer crust but a slightly soggy bottom at the centre of the pie. (Neopolitan pizzas are traditionally notably less crisp throughout than their Roman bretheren.)

I didn't mind this much, finding the whole thing a sloppy, messy joy, even if it was a little hard to eat, but the Ewing would have preferred something a little crisper in the middle. 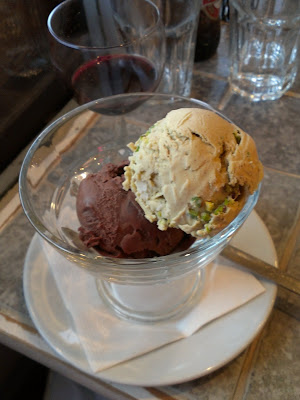 Puddings are a choice between ice cream and sorbets from the celebrated Oddono's, or home made tiramisu. I made sure to leave enough room for a scoop of Sicilian pistachio, before the Ewing and the waitress conspired together and persuaded me to add an extra scoop of chocolate. Both were great, but the pistachio was particularly fine; smooth, milky and mined with sweet chunks of nut. 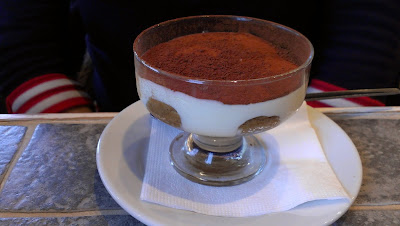 The Ewing's, delightfully retro looking, tiramisu was frothy and light, but missed that boozy punch that would have lifted up towards the Premier League of puddings. However this family friendly version did leave her mostly satisfied (she also kindly offered to 'help' me polish off the rest of my chocolate ice cream). 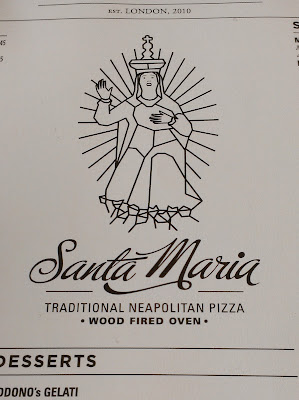 While it may not be East Naples this is certainly the best pizza in Ealing, and, indeed, perhaps a long way beyond. Visiting at a quiet time, as we did, there were no issues with cramped seating or harried staff, just sweet and efficient service and great, simple food and drink that fell well within the twenty pounds a head remit for two courses, including salad, drinks and service.

These pies are the real deal; I have eaten plenty of pizzas in many different styles throughout my years, and, although I haven't met many I didn't like, I'm still dreaming of Santa Maria's chewy, smoky-crusted beauties ever since our visit. Anyone living in the vicinity of W5, then lucky you as Santa Maria also do takeout ; for everyone else it's well worth heading West to grab yourself a slice of the action.