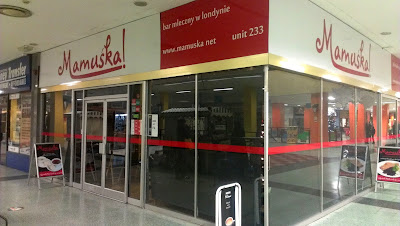 My friend Stealth has lived in Elephant and Castle (or, in her words, between E&C and Kennington) for over six years, and in that time we've had plenty of adventures. From hangover-soothing lime and sodas at the Doghouse; to bottle of bubbles at the Tommyfield; to civilised pints at Paddy Ashdown's favourite haunt, the Prince of Wales in Cleaver Square. There was even the, now infamous, occasion when s slice of 'special' cake was consumed and it took twenty minutes to try and cross the Newington Butts Road.
It's not all drink and drugs and rock'n'roll though, sometimes we have to eat, and one of my favourite places is Polish cafe-cum-restaurant - they descibe themselves as a bar mleczny, or milk bar - Mamuska, housed in the rather inauspicious, if iconic, Elephant and Castle Shopping Centre.
Previous visits have been made in the daytime, where the cafeteria style environs (you order, pay and collect your food on trays from the counter at the front), lively Eastern European clientele, and bright lighting rather bring to mind the image of a friendly Warsaw transport cafe. Our Friday evening visit was slightly more sophisticated - the blinds that they pull down in the evenings to create a more low-key atmosphere made me think they were closed at first - and they even had entertainment in the form of their weekly open mic night. Prices, though, remain comfortingly cheap. Starter and puds for three quid, mains for a fiver; fantastic value for such generous, hearty fare. 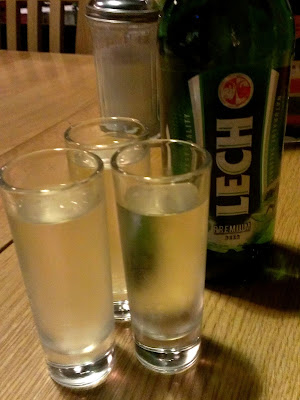 What better way to kick of proceedings than some Polish beer and frozen vodka shots. As well as the hard stuff,  Mamuska offers a great range of soft drinks including Polish beetroot broth (served hot or cold), a large range of coffees, including traditional Polish, and homemade fruit 'kompot'. All at a pound each.

They also make their own fruit smoothies, which can be pimped with vodka if you want to get drunk while maintaining some semblance of 'being healthy'. Weekend brunch sees bloody marys and fresh OJ being offered alongside plates of eggs, fried potatoes and sausage; a very civilised start to the weekend. 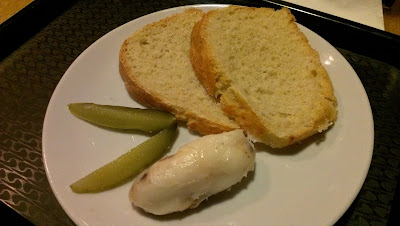 The Polish 'classic pate' is described on the menu as 'perfect with vodka, but don’t tell your cardiologist about it!' Well, they weren't lying. This is a slice of fatty goodness, resembling more a ball of rendered pork fat studded with shreds of crispy pig, than a liver-based spread. Served with polish gherkins and crusty bread this is serious, and seriously tasty, stuff. 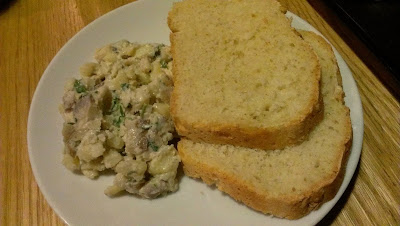 The Ewing's starter of pickled herring salad with potato, onion and gherkin. While they may not be winning any awards for artistic plating, this dish more than made up for it inthe  flavour department. A crunchy, salty and fishy delight. 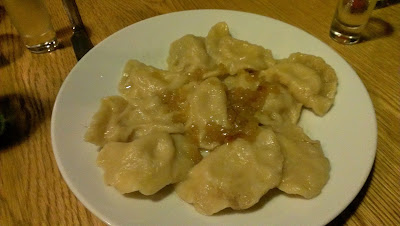 We also shared a main sized potion of the ruskie pierogi, stuffed with a mixture potato, onion and white cheese and topped with a sweet slick of buttery caramelised onions. At first I found the dough a little thick and stodgy, but found I enjoyed them more as the cooled a little, allowing the soft and salty cheese filling to shine through. 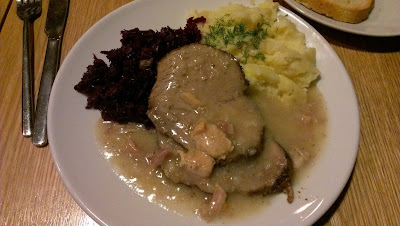 Mains all include potatoes and a choice of side salad or vegetable. As if I hadn't consumed enough pig at this point, I plumped for a main of slow roasted pork with dill flecked potatoes and crunchy red cabbage, they were out of beetroot, as my choice of side. It may all look rather unsophisticated, but the meat had great flavour and was meltingly soft, and the cabbage pleasing crisp and astringent.
Good as it was, I think the golonka, or sticky roast pork knuckle, special they offer on a Sunday is even better. A real heart-stopper of a national dish with the proper glossy gravy that gets me going everytime. This is one dish worth waiting all week for. 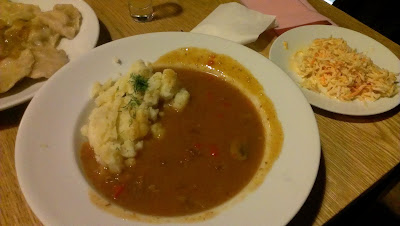 Stealth picked one of her favourites, beef stroganoff. While perhaps, following the rest of the menu, not the most refined example this was still a great bowl of comfort food; tender beef, red peppers and mushrooms, in a rich gravy mopped up by the big pile of fluffy crushed potatoes. Her side dish of shredding celeriac, served in a piquant remoulade style dressing, was particularly moreish
The Ewing had the breaded fish fillet, with sides of potatoes and a leek and carrot salad. Although not a single photo of this seems to exist anywhere, she quietly an happily devoured it while Stealth and I loudly put the world to rights on the other side of the table. 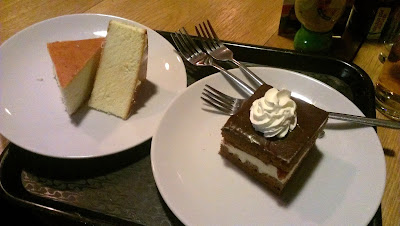 For a while pudding looked like doubtful, after the monstrous portions that had come before, but, needless to say we managed to share a couple between us. The Polish bake cheesecake was excellent. Clean and milky, not claggy, just on the right side of sweet and with a pleasant, slightly grainy, texture. It came completely unadorned on the plate; no cream, berries or fruit coulis were needed to enhance this slice of simple perfection.
We also tried a slice of the layered chocolate cake. I wasn't such a fan of this one, bringing to mind one of those little square 'cakes' they used to serve as desert on flights in the 80's. The Ewing obviously enjoyed the nostalgic vibe rather more, and had no problem demolishing every last crumb. 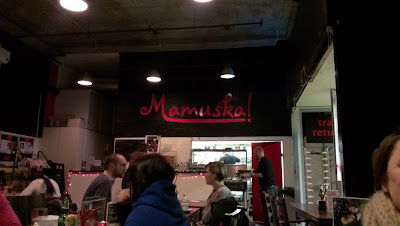 Sometimes you want nothing more than a big plate of homely, good value comfort food. And although the rather austere environs of the Elephant and Castle Shopping Centre may not be the first place you think of heading to find your fix, there is very little to beat Mamuska in terms of generosity - both of portion size and spirit - or value.
While there are certainly no fancy frills here, with a small amount of cash and a big appetite you can have more fun than you ever thought possible in the shadow of Hannibal House. Na zdrowie to that.