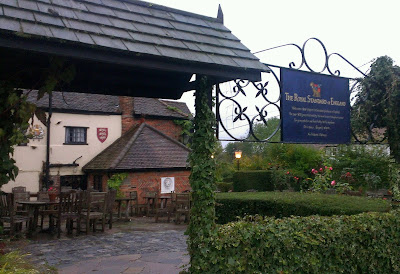 Picture the scene; a chilly Sunday afternoon at the end of October, two open log fires blazing, worn and uneven flagstones leading to hidden nooks and crannies, an assortment of church pews and wooden benches, an assortment of muddy dogs and muddy owners. If you could imagine the perfect pub, chances are it may look a lot like the Royal Standard of England. Hell, they've even started brewing their own beer.

Although we used to visit when I was younger (being down the road from where I grew up it was the perfect birthday, celebration, family get together kind of place), I hadn't been back in years. But, after hearing our friends Michael and Leona were off there for Sunday Lunch, the Ewing and I managed to get ourselves in on a piece of the action. 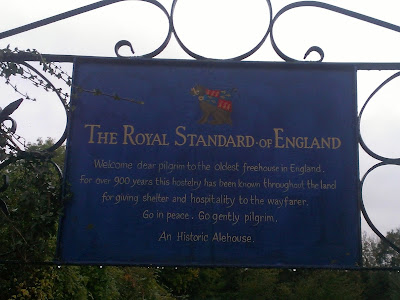 The place has a fine and distinguished history, claiming to be the 'oldest free house in Britain' and welcoming guests through its doors for over 900 years. You can read more about it here, but highlights from the past include Charles I seeking shelter there during the English Civil War, which lead to the pub being bestowed the name 'the Royal Standard of England' by Charles II as a reward for the help provided to his father. They even boast three ghosts, including that of a 12 year old Cavalier drummer boy, who supposedly still prowl the premises.

Thankfully things are a lot less scary now (although the building makes regular appearances in Midsomer Murders, various period dramas, and even the film Hot Fuzz) but, although things may have changed outside, the interior still remains much the same. Worth a visit just to see the building itself, crammed with interesting trinkets and things to look at and not a right angle in sight.

There is a massive settle, apparently built to fit the curved transom of an Elizabethan ship, that greets you as you walk through one door way, while the interior is a cosy and curious mix of oak panelling, cluttered mantelpieces, stuffed animals and black ship's timbers. A perfect bolthole for the chilly winter months, there is also plenty of outdoor seating in a rose garden, and some wonderful local walks that are lovely in the less inclement weather. 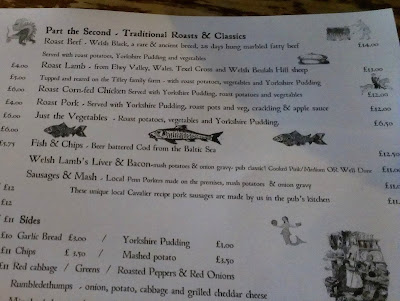 The day of our visit was certainly a day to cosy up in front of the fire. The place was heaving as we arrived (there is plenty of parking adjacent to the pub) and, despite the fact it's a large building, and they serve food all day, bookings are essential if you want to enjoy their celebrated roasts.

They also have plenty of other good, old fashioned pub grub on offer. Locally shot game, fish and chips, homemade sausages, devilled kidneys on toast, liver and bacon and steak and kidney pudding share menu space with lighter salads, pasta, seafood and baguettes. Unusually for the sticks they serve food all day everyday from noon until 10pm (9pm on Sunday). 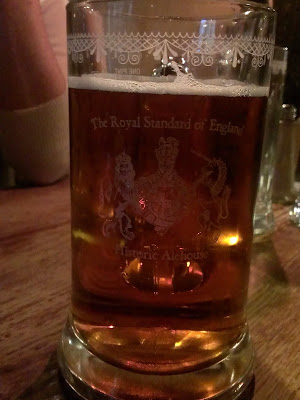 The beer selection is vast, ranging from local brews through to a menu of specialist lagers, wheat beers and Trappist ales. The Ewing and I judiciously sampled our way through the Conqueror Black, from Windsor and Maidenhead; The Rebellion Brewery's seasonal Red Ale; and the Chiltern Ale from the Chiltern Brewery, before deciding our favourite was the Britannia Pale Ale, brewed right there on the premises and bit of a steal for these parts at £2.90 a pint. 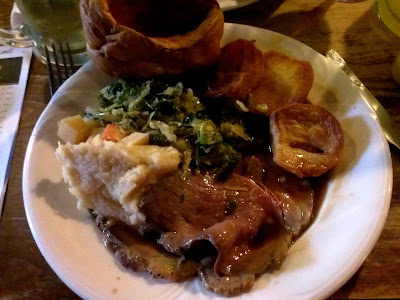 The food was good; monster yorkie, cabbage, swede, carrots, parsnip mash and roasties that were, sadly, rendered a little tough by 3 o'clock. Highlight by far was the meat - Welsh Black Beef, hung for 28 days - usually the source of the biggest disappointment in a roast you haven't presided over yourself. The generous slices were well marbled and blushing pink, with a rich 'beefiness' and a glorious thin seam of wobbly white fat around the edge.

The Ewing's venison also deserves a mention. A heap of beautifully tender game that covered the whole of the dinner plate, complete with a mountain of trimmings piled up on top. Michael and Leona's choices, the chicken and Elwy Valley lamb respectively, were also swiftly dispatched. 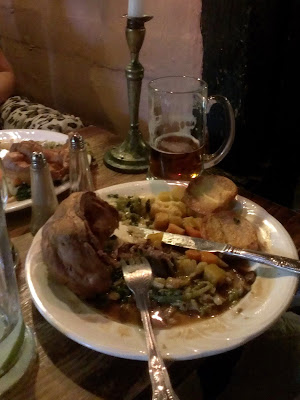 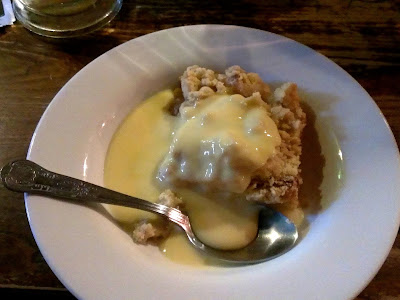 Puds were of the reassuringly rib-sticking variety, and included treacle tart, bread and butter pudding, chocolate brownies and homemade ice cream, but the lure of Bramley apple crumble was too strong to resist. The sandy crumble topping was crunchy, buttery and dense, the perfect foil to the sharp apples beneath and the whole thing was blanketed in glorious vanilla custard. The perfect nursery pudding, and one of the best crumbles I have eaten in a while.
In an country where great pubs and great heritage are being slowly eroded by the dreaded 'rules and regulations, coupled with the inflexibility of landlords to give people what they actually want (smoking ban, taxes on beer, no children, no dogs, no food after 2 o'clock) the Royal Standard of England remains a fantastic place and a true piece of English history. To anyone in the South Bucks area (for Londoners mere 20 minutes on the fast train from Marylebone, plus a little walk from Beaconsfield Station) a visit here is a must.
And for those who are farther afield, although places like the RSOE may becoming rather more of a rarity, there are still plenty of local gems just like it. So, stop reading this blog (unless your reading it while in the pub, in which case carry on), and go visit one today. Drink some local ale, eat some pork scratchings, find your feet stuck to the sticky floors, and be thankful places like this still exist.﻿