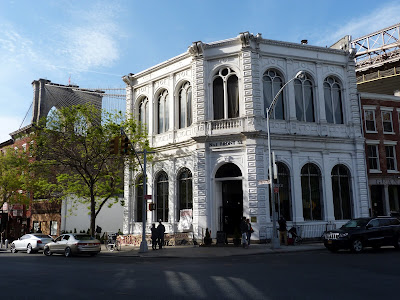 The Ewing and I were very blessed on our American trip; good weather, good company and a wonderful adventure. There is of course always some rough with the smooth and the nadir of this holiday came late on a Monday afternoon at a very windswept Coney Island. After my camera had broken, my watch had stopped and sand had blown in my hot dog we decided to abandon the beach and find Totonno's, the famous coal fired pie shop just off the sea front. While finding it proved easy enough, seeing it was closed until Wednesday finally tipped me over the edge. After a (very) half hearted attempt to kick a small tree The Ewing took charge and marched us off to the foot of the Brooklyn Bridge, home of Grimaldi's Coal Brick-Oven Pizzaria.

Patsy Grimaldi Learnt to make pies at his uncles in Harlem, before moving over the bridge to his Brooklyn storefront (Manhattan had, by that point, banned any new coal-fired ovens for safety reasons). What happened next was a saga featuring sell-outs, franchising and naming-wars deserving of its own mini-series, but all we really need to know for the purpose of this story is that Grimaldi's has just moved to a new location on Front Street, and is still serving coal-fired pies. 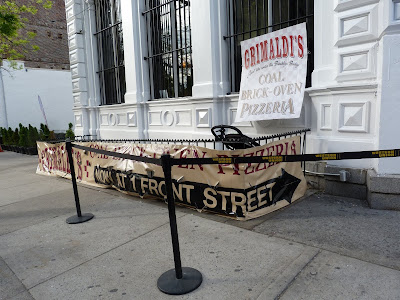 Getting there in the late afternoon meant we missed the worst of the lunchtime rush, although even at that time there was still a good 20 minute wait (and you have to join the same queue for take out too). But the lure of a crisp pizza and a cold beer was enough to keep us going. 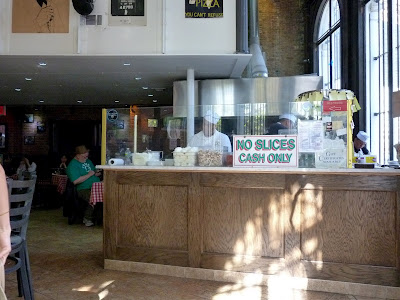 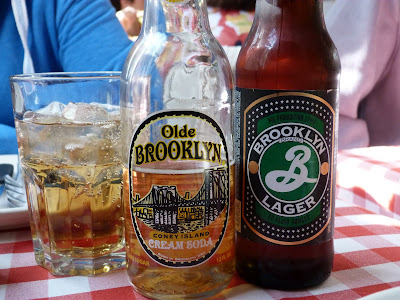 I, of course, had to have an icy Brooklyn Lager while the Ewing went for a much needed sugar rush, in the form of a bottle of Olde Brooklyn cream soda. I will drink pretty much most things (that includes my Nan's parsnip wine), but still firmly believe that cream soda is the Devil's work. The Ewing polished it off in double quick time though.

In case we were pining for home they had very thoughtfully put the Manchester Derby on the TV, and considering the slightly fraught previous couple of hours it made a welcome distraction from our hunger, tiredness and general dislike of each other by that point. 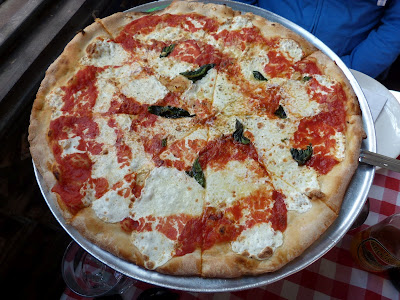 Thankfully the pizza restored our good mood; we shared a medium red pie, half with garlic. The combination of homemade dough, fresh mozzarella cheese, crushed tomato and a handful of fresh basil is simple perfection. The cheese was milky and melty, the tomatoes provided a little tannic sweetness and the crust managed to be both soft and crispy in all the right places. The garlic on the Ewing's side gave the simple flavours an extra edge and, as our waiter pointed out, would certainly keep the vampires at bay. I would have liked to give the sausage or spinach a try to, but the simple things in life are often the best (as I am living proof) and it would be hard to improve on this triumvirate. 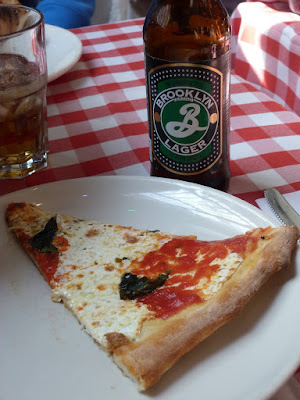 While I didn't have time (and the second stomach)to compare it to any other coal fired NY pies, what I can say, as someone regularly subjected to high street pizza chains in the UK, is that I still dream about it now. And as someone that's always constantly thinking about the next thing they're going to chow down, there can be no higher praise than that. 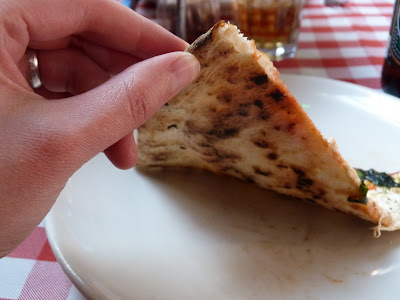 The blistered underside of my first slice, hot out the oven. For the first time in a long time I ate my first piece with out the adornment of any flaked chilli's, pepper, BBQ sauce or mayo to dunk the crusts in. (Yes, you heard me right readers, mayonnaise.) All this wedge of this pizza needed was to be gently folded down the middle and enjoyed while the mozzarella was still springy and warm, accompanied by a long draught of icy lager. 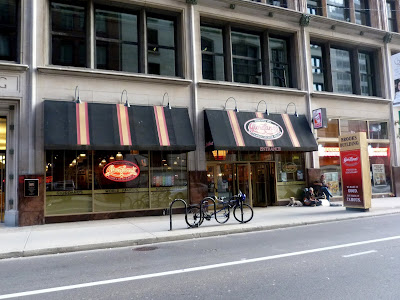 The Chicago deep pan pizza is a much maligned thing. We met an rather waspish, young East coaster while travelling on the train to San Francisco who proudly told us that he and his friends would never dream of eating such an abomination; even in the Second City itself. I, however remained undeterred;  Saturday afternoon at the baseball followed by Saturday evening eating pizza sounded like the makings of a pretty good weekend to me.

Chicago deep pan pizza can broadly be seen as being served in two styles, regular deep pan, or stuffed. Both styles feature the tomato on top of the cheese, but the stuffed version offers an extra layer of dough between the cheese and the sauce. I was keen to try either, but Grimldi's, the most famous stuffed pizza in the City, was the closest to our hotel, and so it was that we excitedly (well, me, the Ewing wasn't really as eager to experience its doughy delights) made our way there for an early dinner. 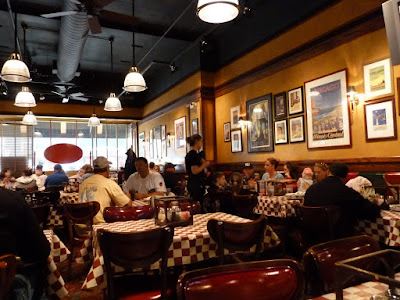 Inside is just as you expect it to be. Groups of families, friends and young couples soaking up the 'atmosphere' provided by the rolling sports news on TV, retro Chicago inspired prints on the walls and plastic red-checked tablecloths. If all this sounds unappealing, it isn't supposed to be. The place has a genuinely friendly, buzzy feel, and while it certainly wouldn't be considered a place to linger for an evening, it provides the perfect backdrop for some solid grub. 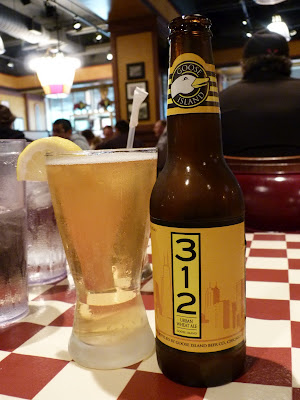 Amongst all the watery Bud, Coors and Miller there were a few decent craft beers. I enjoyed the 312, a wheat beer from the local Goose Island Brewery. The Ewing went to town with the Windy City Hurricane cocktail, surprisingly strong and tasty despite its modest price tag and lurid cherry garnish. 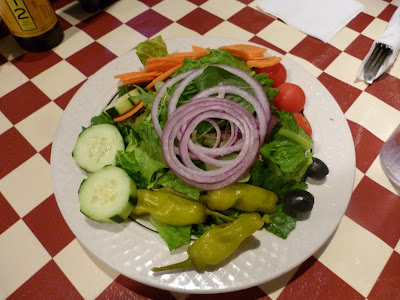 We tucked in to a house salad while waiting for the pizza to be cooked (they are made to order and need about 40 minutes to cook through). The salad was nice, nothing too remarkable, until the Ewing had her first encounter with ranch dressing....

When the waiter had asked what dressing we wanted, before quickly reeling off a huge list, my mind went blank and I plumped for the first one I could remember. I've always enjoyed ranch on my salad, usually while on holiday in the States, but I could tell from the Ewing's look she was less than impressed with my choice.

After eating the first few leaves unadorned by any dressing she reluctantly poured a little bit on the rest of her plate. Well, readers, the rest was history. To say she enjoyed it was quite the understatement, not only did we have to slather it over all the rest of the salads we ate during the trip we now have a fridge full of it (Paul Newman brand, as the Ewing is impressed he gives all the profits to charidee) In fact, she's probably standing by the fridge necking some straight from the bottle as I write this. 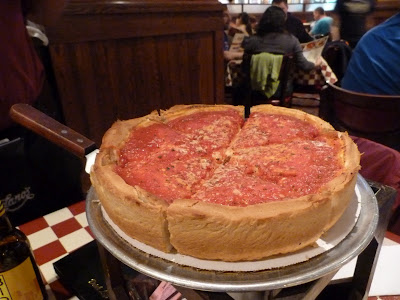 This pizza is a serious beast. Even the 10'' is vast, containing serious amounts of meat and dairy, sandwiched between the thick, bread-like crust, and needing a cake slice to lever each piece out of the pan. Eating it was like swimming into a molten river of cheese, like bobbing up and down in a viscous pool of creamy mozzarella. I was shovelling it in at such a frantic rate that at one point that I nearly choked trying to swallow what must have been the half a pound of cheese that seemed to be stuffed into every piece. 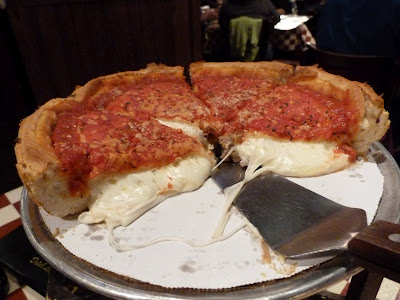 If all this sounds like a terrible thing, trust me it wasn't. (The Ewing, of course, may have a different view, having to watch me grimace and splutter across the table.) Granted, you would need to be a fan of a substantial slice to get this best from this offering, but I really enjoyed it. The crust, as thick and doughy as it seems in the picture, was surprisingly ethereal and buttery without being greasy at all, and the cheese was studded by chunks of wonderful, fennel-spiked sausage. 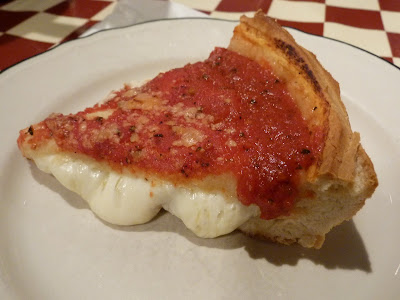 The real litmus test for this pizza was the Ewing, who I was convinced would reject it out of hand for being too dense and stodgy. Instead she got stuck in like a trooper, managing nearly two slices before waving the white flag of defeat (only a little less than I ate). What was even more surprising is that I found her in the hotel room eating the cold leftovers a day later. Despite the cheese being a solidified mass by this point, and the crust being a little on the crispy side, it was still a rather moreish snack to enjoy in bed while watching the NBA playoffs.

The best pizza? I'm going to completely bail out of making that decision and call it a dead heat. What I do think, as wonderful as Grimaldi's offering was, is that coal (or wood) fired pie is fairly common (if not always great), while Chi Town really is the only home of anything approaching a good deep pan pie. While a good blistered crust with simple fresh toppings is now available in many places around the globe I would have to take a trip back to the Windy City to experience the beauty sinking my teeth deep into gooey cheese and sausage surrounded by a perfectly buttery crust.

So if you find yourself in the Midwest, don't be a pizza snob and try to find the hour to spare to experience one of these beauties. You can always eat the ranch salad while you're waiting.
Posted by Amy at 11:42