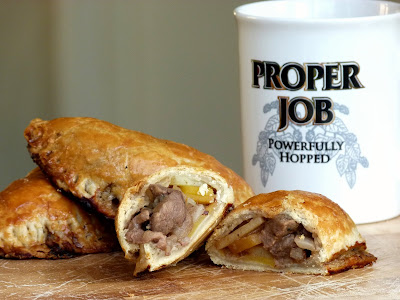 Cornish pasties, or 'parsties' to the passionate, pastry loving locals, are serious business. Not only are the ingredients and shape of a 'proper' pasty hotly disputed, recent legislation has awarded the humble Cornish pasty a PDO, meaning only pasties prepared within the counties borders (although they can be baked outside, and the ingredients can come from elsewhere too) can bear the Cornish name. 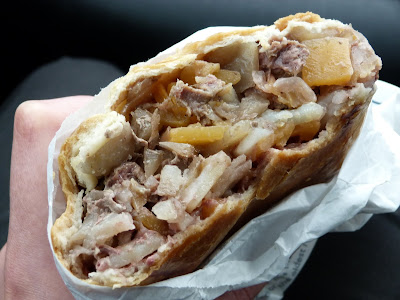 With their mixture of flaky pastry, sweet veg and peppery beef a Cornish Pasty is truly a glorious thing; this stellar example is from the Chough Bakery down by Padstow Harbour. Tender skirt steak, turnip and potato, wrapped in a hot, crisp pastry carapace. The perfect lunch to munch while looking out to the Doombar and fending off the seagulls. 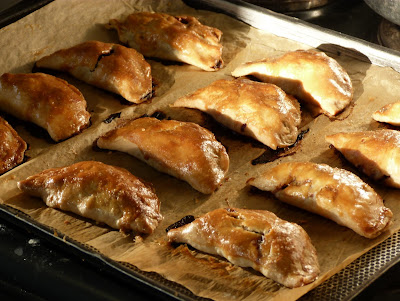 These moreish little morsels were knocked up in my kitchen, making them more of a Chiltern pasty, but I did stick to the traditional filling of raw steak, potato, swede (or, as the Cornish call it, turnip) and onion. Carrots, as in a 'real' Irish stew, are anathema. The crimp is also important, with a Cornish pasty being 'D' shaped, and with a side crimp, in contrast to the top crimp favoured over the border. 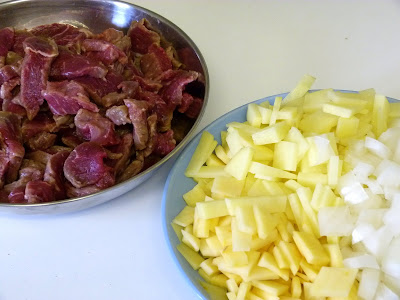 While skirt steak is the standard cut for a pasty, I used up some fine chunks of chuck from the East London Steak Co. Which ever cut you use make sure the meat is well trimmed and cut thinly, as it needs to cook inside the pastry crust. To give it a further twist I marinaded the meat overnight in a bottle of the St Austell Brewery's Proper Job ale, giving it a lovely, beefy bitterness to contrast with the sweet veg. 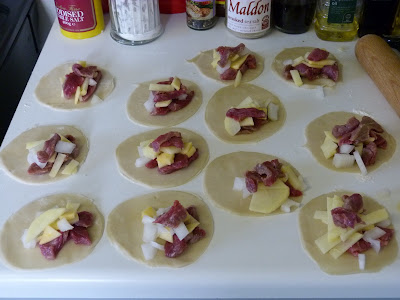 I made these pasties a lot smaller than the norm, which makes them ideal for a little snack or perfect picnic fodder in the Summer, (if not a little tricky to assemble without the filling poking out) but feel free to make them which ever size suits you. One further word of warning, be careful of overfilling,  less is definately more, and be sure the edges are thoroughly crimped before baking. I had to rush to rescue a tray of exploding pasties whose edges had burst open as soon as the pastry had begun to rise. Any leftover filling can be bake in an ovenproof dish along side the pasties; cover with a circle of pastry for an easy 'pasty pie', or cook uncovered for a tasty beef, ale and potato stew. 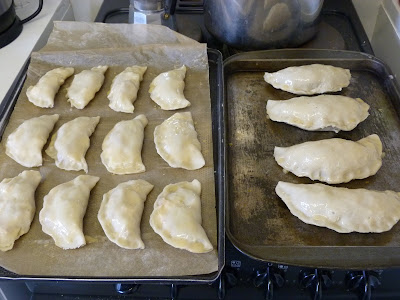 Makes about 16 small pasties or 4 large ones

The night before you want to bake the pasties place the steak in a non-metallic bowl and pour over the beer to cover. Cover the bowl and place in the fridge to marinade.
The next day pre-heat the oven to 180c.
Pour off the beer marinade from the steak and cut into small pieces for the pasty filling.
Peel and chop the onion into small chunks.
Peel the potato and swede and cut into thin, postage stamp-sized, pieces.
Roll the pastry out to about 1/2cm thickness, and cut discs from the sheet (I used a ramekin, for larger pasties use a dinner plate).
Place a small amount of steak, onion, swede and potato onto one half of each pastry disc, leaving room around the edge, and season with salt and pepper.
Fold over the unfilled edge of each pastry disc and carefully crimp the edges firmly together.
Brush thoroughly with the beaten egg mixture and place into the oven. Bake the pasties for 30-45 minutes (depending on size) or until the pastry is crisp and golden brown.
Leave for 5-10 minutes to cool, then pasties eat while still warm, preferably with a nice pint of Cornish ale to help them down.