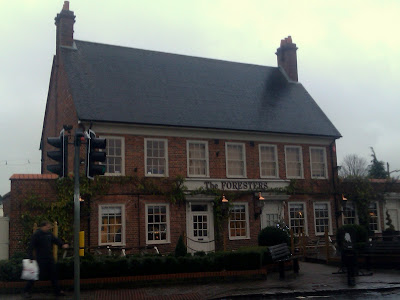 On a filthy winter afternoon where better to be than holed up in front of a log fire eating burgers? Luckily the Ewing shared my sentiments, and so we headed over to a (very old) sometime haunt of mine, the Foresters in Farnham Common.

Inside is certainly far fancier than I remember it, way back in my sixth form days, with the space divided into a bar area, with aforementioned fire and big leather sofas, and a more formal dining room with large, dark wood tables and high backed, comfy black chairs. Although it was a miserable Monday there was a steady crowd of people coming in for food and drinks, giving it a nice buzz. 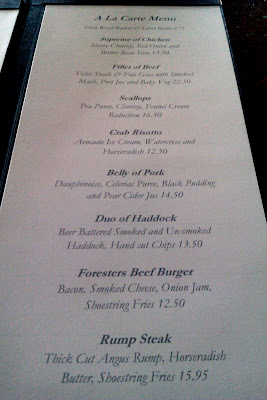 Despite being tempted by almost everything on the menu (especially the crab risotto and the pork belly with pears and black pudding) we both fancied some proper comfort grub; meaning the fish and chips for the Ewing and the bacon cheeseburger for me. 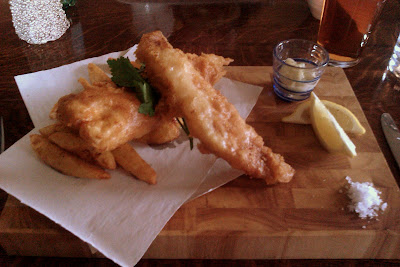 The Ewing's Duo of Haddock; beer battered pieces of smoked and unsmoked haddock served with 'proper' chips and tartare sauce. These were two decent-sized, crispy and tasty pieces of fish; the smoked haddock was an unusual touch, and worked surprisingly well with the batter treatment. The chips were pretty good, fluffy within but quickly becoming a bit soggy. 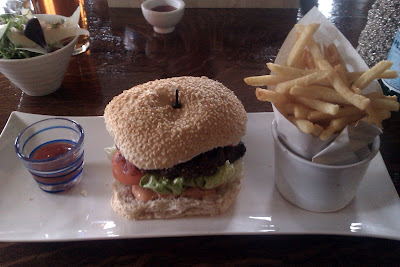 The Foresters beefburger with bacon, smoked cheese and onion jam served with shoestring fries. I was a little worried the 'swish' surroundings would also mean micro-portions of grub. As you can see there were no problems on that front; this was a monster burger served in a traditional, sesame seed-studded bun accompanied by a tasty looking pail of fries. The fries were really very good. A little thick to be properly 'shoestring' they were none the less fresh, crispy and well seasoned. 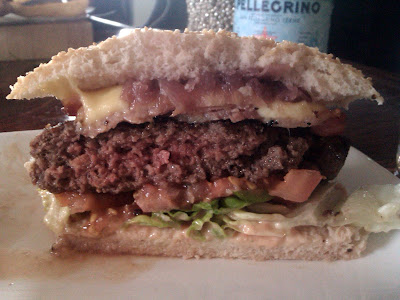 The burger was, literally, a dish of two halves; the top half saw cheese - billed as 'smoked', but tasting like a more like a good old, claggy burger cheese - paired with back (sadly not streaky) bacon and a decent, sweet red onion jam. The bottom featured fresh tomato, shredded iceberg lettuce and good old burger sauce (a piquant mix of tomato ketchup and mayo). Individually the flavours were good, but combined it was a little overwhelming, especially for the bun which disintegrated mid-bite.


The patty itself was coarsely ground, cooked nicely pink and very juicy. Although aggressively seasoned with black pepper it could have done with a touch more salt, especially as the bacon was a rather mild-mannered. Despite being very messy to eat, and a little muddled flavour-wise, this was a decent and enjoyable burger. 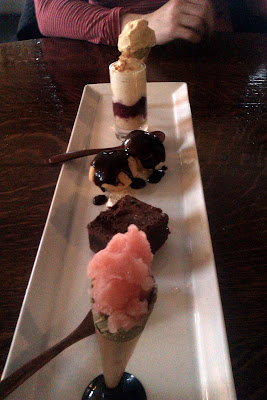 'Pudding tapas' is a phrase that is either going to make you jump for joy, or die a little inside. At first I was unconvinced, but realising it was a good opportunity to really have my cake and eat it, I embraced the theme and picked several items from the menu. The Ewing, with her notorious sweet tooth and indecisive mind, needed no such convincing, and was in her element at not being confined to making one choice.

From bottom to top we picked; blood orange sorbet; chocolate brownie; profiteroles with chocolate and chestnut cream; sherry trifle and egg nog ice cream. All were solid, without being outstanding. I particularly liked the shot of boozy, raspberry trifle and the profiteroles. Egg nog ice cream tasted a lot like fudge, but was no worse for that, and while the sorbet was a little sweet for me the Ewing made light work of it. I would comment on the brownie, but as I only got a few remaining crumbs so I'll have to wait for a return visit to properly pass judgement.

Despite being firmly on the wagon, following much Christmas indulgence, I had a very merry lunch at the Foresters. While the formal dining area feels pretty refined, the open fire and 'pubby' touches give it a lived-in and relaxed feel. The calibre of cooking is obviously good, and I would like to revisit to try some of the more ambitious-looking mains, as well as ticking off the rest of that pudding menu!
Posted by Amy at 11:25