In honour of our recent Antipodean house guests I decided it was time to dig out the bottle of Bundaberg Red we had bought back from our last trip to Oz. Apart from a few dark and stormies the bottle had thus far remained unloved at the back of the cupboard and was now attracting layers of dust alongside the aquavit, creme de cassis and melon liqueur. 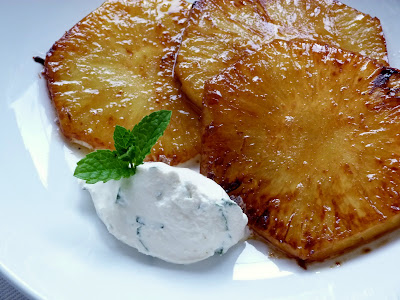 Taking advantage of my recent pineapple love in, and finding some giant specimens for a quid at my local market, I decided to caremelise them along with some brown sugar, a little lime and a healthy slug of rum.  A good dollop of whipped cream, with mint from the garden and a little more booze, rounded things off nicely.

A brilliantly simple summer pud, just try and take more care than I did if you're flaming alcohol.  Rather stupidly I leant over over the stove while igniting the rum and later that evening the Ewing had to point out that half my hair and one eyebrow had been singed.  Not a great look. 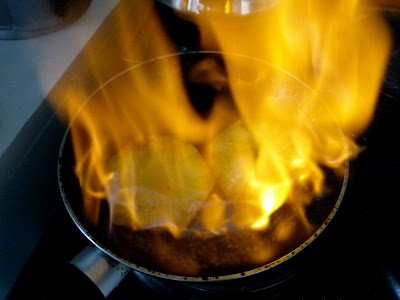 Heat butter and sugar in a frying pan until a the sugar has dissolved and the mixture is starting to turn into caramel.
Add pineapple slices and cook until golden on both sides.
Add a healthy slug of rum and ignite.
When the alcohol has burnt off place pineapple slices on plate and pour syrup on top.
Serve with mint cream.

For the mint cream lightly whip cream until it stands in soft peaks.
Add chopped mint, sugar and rum to taste. 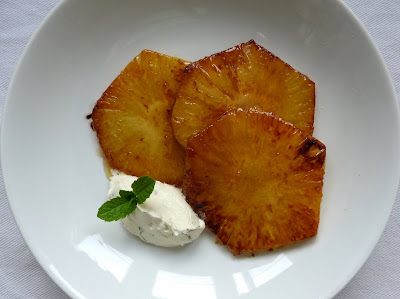